Metro woman takes a leap of faith, launches her florist career in her 50s 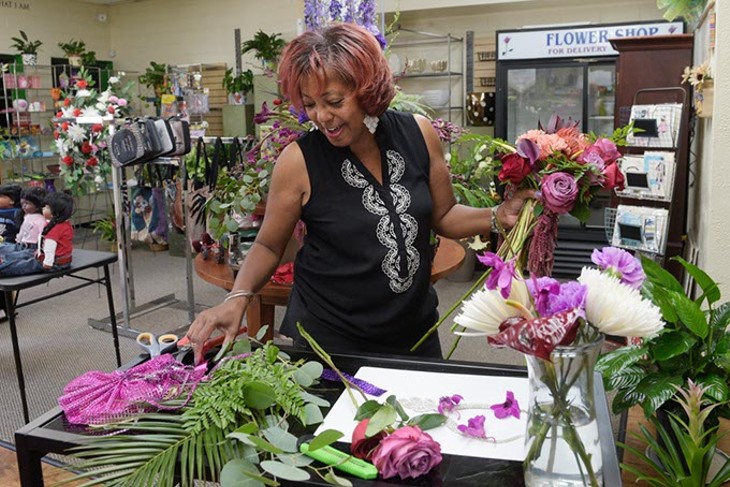 “I would rather create a casket spray than eat dinner. I absolutely love sympathy work,” said Treva McNeill, newly minted florist and owner of The Floral Chateau, 1829 NE 23rd St. “One day, as a part of my five-year plan, I would like to be able to use my business to give community service, maybe to a hospice or something like that.”

Business at The Floral Chateau, opened at the end of May, is a little bit slow, but steady, and McNeill is optimistic. On a particular Saturday morning, she was wrestling with a large Christmas garland, determined to repurpose it into something a client can use outdoors, but she was short on time.

“I’m on my way to Stillwater for the Oklahoma State Florists’ Association conference this morning,” she said. “The ten o’clock session is on succulents, and this afternoon at one, it’s about dish gardens.”

She speaks with the enthusiasm of someone who loves her craft but also shows a twinge of anxiety. She has had a few tough years and needs to make a solid go at her business. As she told her story, a man came in to look at houseplants. She smiled as she patiently answered questions about watering and lighting needs.

“From the time I was a young adult, I had worked at Lucent Technologies. I worked in the financial departments, in payroll and accounting. When they closed, I was 43 — too young to retire,” she said. “So I worked for the Department of Public Safety for five or six years, and then I left and became a TSA agent at Will Rogers World Airport.”

“I fell on my way into the building. I sustained an injury, and I couldn’t pick up and throw heavy bags anymore,” McNeill said. “Even though I was coming to work when it happened, at the airport, clearly not there to catch a flight, it was decided that I was not eligible for worker’s comp. They told me that I should file a claim against the airport or the city but my injury would not be covered.”

She hung on for two years and tried to transfer to a less physical department like accounting, but she was ultimately fired. There is no self-pity as she tells her story, but her fear as a new business owner and her fierce determination are obvious.

“I spent a lot of time praying, asking the Lord what I should do, what I could do,” McNeill said. “I’ve always been an artsy-craftsy person, and I’ve always been a busy person. I like to stay busy, and I have to pay my mortgage. So I decided to go back to school, and I went into the horticulture program at Metro Tech.”

While in school, she worked part-time at a church-owned Christian bookstore. She was in the right place at the right time, and serendipity soon brought her a retail location right there in the bookstore.

“The church committee came to me and said when I got out of school, I should come back and run the bookstore full-time,” she said. “I thought, ‘Well that’s dumb. Why would I want to run a bookstore when I’ve just gone back to school?’ But their offer was that half of the space could be for my business, that I could do flowers, too.”

And The Floral Chateau was born.

Print Headline: Persevering petals; A metro woman takes a leap of faith and launches a florist career in her 50s.