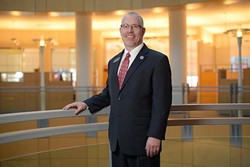 All branches of Metropolitan Library System offer free access to computers and the internet. It’s the No. 1 service at more than a third of the 19 library branches located across Oklahoma County.

“Many times people are waiting one hour, two hours and as much as three hours for a computer to come open,” said Tim Rogers, who recently entered his third year as the system’s executive director. “Unfortunately, many of our residents in Oklahoma County do not have a computer at home or they don’t have the broadband connection to do what they need to do.”

Often, public libraries across the country — including those in Oklahoma County — are the only providers of free, public computer access. As the role of libraries evolves into engaged community centers, leaders like Rogers look for ways to advance popular services and reach more residents.

For instance, south Oklahoma City’s Almonte Library is set to receive about a dozen laptops and a dozen Chromebooks for public in-library use. As part of a pilot program, in addition to the library’s rows of public-use desktop computers, patrons may check out laptops and Chromebooks for short-term use. Rogers envisions teenagers gathered around a laptop as they work on class assignments or a parent typing on a Chromebook while keeping an eye on their child in the children’s book area. When the demand for computers is low, library staff can utilize the technology in a class setting as a teaching tool.

“We see how it lowers the wait times, and we see how people respond,” Rogers said, discussing indicators of the pilot program’s success. “Has it enabled us to bring more people in, and has it provided something different?”

Decades ago, the defining role of libraries was to circulate books. Librarians touted their success by high circulation rates. As Americans move away from printed pages to digital screens, library leaders have adapted to the everchanging world by reinventing the library as more than just a place to check out books.

As Rogers described the array of materials, services and programs offered, it’s clear that Oklahoma County libraries have been evolving for some time. In many cases, some of the branches are no longer citadels of silence as musicians perform, children build robotics, tutors help students with homework and leaders speak about various subjects.

With a collection that includes e-books, e-magazines and e-audio books as well as access to academic journals, test prep programs and online resources like Ancestry.com, Consumer Reports and the Lynda.com software training program, patrons can utilize the library without stepping foot inside a branch.

Despite a recent national study by Pew Research Center that suggested library use slowing across the country, the Metropolitan Library System branch visitors grew by 754,180 between fiscal year 2014 and 2015 when there were more than 5 million individual visits.

Rogers believes diversity and richness entices most people through the doors. One such program is Reading to Dogs, in which  children practice reading as therapy dogs listen. On a recent visit to The Village Library, Rogers witnessed 15 kids waiting in line to participate.

Across town at Del City Library, children gather for Science Sundays, in which librarian Joshua Jordan conducts experiments. When the tests are complete, Jordan shares titles that go into greater detail about the science behind the experiments.

While libraries have always played a role in educating children with story times and summer reading initiatives, educational programs like Reading to Dogs and Science Sundays further build a foundation for learning.

For adults, the library system provides literacy, GED, language and job skill classes. Additionally, the system can be a resource for people wanting to grow their small business, those in need of employment or those who wish to research new careers.

“We have a great community now, but we have potential that is untapped,” Rogers said. “I think the library can be a huge part in tapping the untapped.”