Broadway star Kelli O’Hara returns to her home state for An Evening with Kelli O’Hara, a performance supporting youth arts access and education.

O’Hara, an Elk City native and winner of the 2015 Tony Award for best performance by a leading actress in a musical, performs Feb. 29 at the National Cowboy & Western Heritage Museum, 1700 NE 63rd St., in a fundraising effort to benefit Meyers Theatre for Young Audiences.

Sandy Meyers and her husband Stewart have made the theater and its programming their life’s work.

She said O’Hara is a true lady of Broadway.

“She is beautiful, but it’s not necessarily the looks that are the acclaiming prize,” she said. “It’s what’s inside and what she conveys on stage. To emulate the characteristics of Kelli O’Hara, for a young person, would be wonderful.”

Sandy was appointed by President George W. Bush to his advisory committee on the arts.

The couple spent years working with the John F. Kennedy Center for the Performing Arts and organizing the Kennedy Center’s Touring Theater for Young Audiences in Oklahoma City.

That program no longer exists, which is why the pair, along with Oklahoma City University (OCU), is establishing an endowment for Meyers Theatre.

Sandy said the night with O’Hara has been two years in the making. 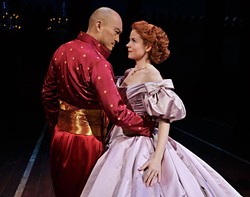 During her time on the presidential advisory committee and as a member of the Kennedy Center board of directors, Sandy was put under the tutelage of First Lady Laura Bush, who Stewart said was enamored with the education of young children.

During that time, the Kennedy Center set up a touring program that put on plays especially designed for children — shortened versions of well-known performances often featuring elements of American history.

South Pacific, for example, is supposed to be a three-hour musical, but it was cut down to 50 minutes for the program.

On their own dime, the Meyers family made sure there were several tour stops throughout Oklahoma City during the program’s run.

However, the touring Kennedy Center series eventually lost its funding.

The couple now works with OCU to continue the work started by the Kennedy Center.

“Sandy and I know we can’t go on forever, [but] we want this to go on as long as possible,” Stewart said. “We want to establish this endowment so that script writing and script direction will be done here at OCU.”

In the 10 years since the Kennedy Center program began, Stewart said, more than 45,000 children have seen one of its plays.

He also said he wants Meyers Theatre’s plays to teach children about the Declaration of Independence, the Constitution, past presidents and notable Americans.

Sandy and Stewart hope to use their plays as a sort of living textbook to teach U.S. history and patriotism, which they said is sometimes lacking in the education of children today.

Textbooks are important, Sandy said, but they do not get students excited like a play written especially for them would. A character like George Washington might seem old and stale on the pages of a book but can be seen on stage as the man and leader he was.

“It’s live theater,” Sandy said. “It’s the living story of possibilities, of futures, impressions, imagination, creativity. That’s what builds America, and it can build every country in the world if given the freedom and the opportunity.”

The arts also can bring different people closer together.

Sandy said a play gives people common ground and a shared experience, even across cultures.

“It never dies,” she said. “You know that arts is the international language. You don’t have to really speak Chinese to understand when you go to China to see a play. It tells you what it’s about.”

Sometimes a performance can be the inspiration that pushes someone to achieve greater things.

“Kelli O’Hara didn’t grow up in a theater,” Stewart said. “She grew up in Oklahoma, on a farm. It was her exposure to what we’re talking about. She wouldn’t be where she is today if it hadn’t been for [the arts].”

Dinner will be served at 5:30 p.m., and O’Hara will perform afterward. A VIP reception with O’Hara follows the event.

Print headline: Broadway benefit, Kelli O’Hara headlines a fundraiser for the endowment of the Meyers Theatre for Young Audiences.

An Evening with Kelli O'Hara