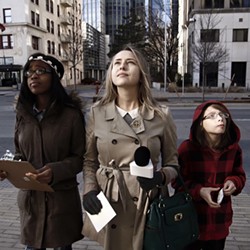 The first time Michaelene Stephenson found herself in one of Mickey Reece’s projects, she recalls the director telling her he really wanted to make a movie with a mostly female cast.

The actress became the lead role in the local filmmaker’s most female-driven production yet.

Stephenson portrays Gabby Ross in Broadcast, Reece’s first release since 2015’s Suedehead, in which she played a smaller but important role as the lead’s bratty sister.

Reece has developed a reputation as one of the state’s most prolific moviemakers. He released three projects in 2013, two in 2014 and two more last year.

Reece wrote and directed the film, which chronicles the life of single mother Gabby as she tries to find purpose in her seemingly aimless life with her son, Keevin, played by Reece’s 12-year-old son, Julien Cash Reece. Gabby gains local infamy after pictures of her abandoning her pet dog by the side of the road go viral on social media. She tries to make a name for herself and fulfill a fantasy by recruiting her son as a crewmember on her self-created newscast.

Gabby interacts with a number of female characters along the way, each played by local actresses.

“She was hilarious and wonderful to work with,” Stephenson said of McCallister. “I wouldn’t have had that opportunity if it hadn’t been for this film.”

Broadcast might be more female-driven than Reece’s other projects, but it still taps into a vein similar to Suedehead, as both protagonists try to find meaning and fight off isolation in a world they feel has passed them by.

“I feel like she’s kind of a misfit character,” Stephenson said of Gabby. “There’s plenty of things going on in her life that can make you judge her or just not like her, but I feel like as you watch the movie, you end up having a lot of empathy for her.”

Broadcast was shot between January and April. Stephenson had platinum-blonde hair before filming began but dyed her hair a darker color and altered her appearance during production.

“I purposefully had to grunge myself up a little bit,” she said. “That was interesting, and it kind of bled into my personal life a little bit too. Playing that character for so long, I was like, ‘Man, I need to look like Gabby.’ Even at work, I looked like Gabby.”

A few years ago, Stephenson could not imagine herself as a dedicated actress.

Acting has not been a lifelong dream. Before taking a course at The Actor Factory in Norman, her only experience was one middle school play. She chose to re-explore the profession after dropping out of college, a place she felt like she didn’t belong.

So far, that decision has been a rewarding one. Stephenson said acting offers her some peace of mind as an avenue for expressing emotions that otherwise might not be socially acceptable.

“I feel like I learn so much about myself with each character that I do because I have to figure out how to relate to that person,” she said.