Mick Foley is more than just a wrestler 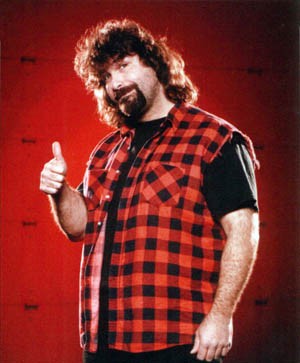 If you only know the name Mick Foley from his wild professional wrestling career, you have only just touched the tip of the iceberg. The three-time World Wrestling Entertainment (WWE) champion achieved international fame under his Mankind moniker, and his antics in the ring are legendary: he lost an ear in Yokohama, Japan, and he was knocked unconscious in 1998’s Hell in a Cell match.

That much physical danger can take its toll, and in 1999, he was told that his days in the ring were over. He took up writing, penning a 700-page memoir that he wrote by hand. It shot to the top of the New York Times bestseller list and stayed there for 26 weeks.

He has made the transition from internationally famous wrestling star to writer, performer and advocate. He is a tireless philanthropist, donating money and his time to various causes, especially those that affect women and children.

“I guess it’s a double-edged sword. It should no longer be a surprise, but then every time I go out [and do something else], it’s, ‘Look at what this wrestler can do,’” he said. “When I was told that I couldn’t be in the ring anymore, the idea of having another outlet, a way to express myself, became very important to me.”

That’s not to say the transition was easy; Foley struggled to find his voice and his method of expression through trial and error, and he is the first to admit there were plenty of errors.

“It was difficult at first,” he said, “because I started out doing the worst possible thing I could do, which was try to become a comedian instead of a storyteller.”

And, of course, there were critics.

“I can’t tell you the number of times I hear ‘a surprising amount of warmth’ when it comes to everything I do,” he said. “Like the book and the tour — everything I do has warmth. It should no longer be a surprise.”

He does admit there’s an upside to those low expectations, though.

“There’s something to be said for people setting the bar pretty low and then hurtling over everyone’s expectations,” he said.

This is something that Foley has become quite good at. From penning his books to donating a portion of his proceeds to various charities, the accomplishments he is most proud of are the ones that make a difference in the lives of people. He feels that he is an unexpected face as an advocate for sexual and domestic abuse survivors, and it works in his favor.

“This may be an unlikely way to make a difference, but it seemed a great way to make one,” he said. “I try to create awareness and hopefully conversations that will change the way people think.”

Foley feels he has hit his stride in preparation for his upcoming performances. He has ironed out the show’s glitches, and it’s becoming something he is proud of.

“When I’m on stage, I feel like I’m in the ring,” he said. “I am trying my very best to take people on a journey, and at the end of the night, I base the show on how big the smiles are.”

Print headline: For all Mankind