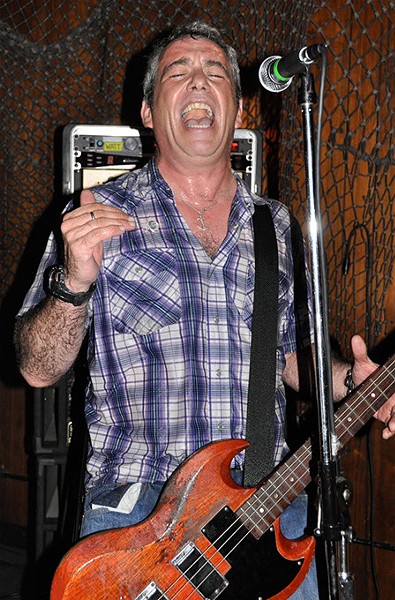 Mike Watt is one of the most prolific musicians of the original punk generation. He has gained a rabid following since he burst on the scene with Minutemen in the 1970s. The band consisted of him, a few rotating members and his best friend Dennes Dale “D.” Boon.

“I met him at a park, and while there weren’t guns, there was violence,” Watt said. “D.’s mom wanted us to have something productive to do, so she put me on the bass. I owe that lady a lot.”

Watt’s life changed forever when Boon died in a car crash in 1985, ending Minutemen’s burgeoning stardom and leaving scars on Watt that linger. It was one of the most seminal events in his young life. Although kind and upbeat, Watt carries a sadness with him. D. Boon is a friendly companion, always in the corners of Watt’s life, driving him to pursue his passion and never forget what matters. Music became his therapy and outlet for his grief and loss as well as a way to remember Boon. He pursued that passion with gusto.

At 56, Watt has the distinction of creating and working with some of the most noteworthy acts in music. His discography reads like a who’s-who of indie, rock and punk. His trademark growl and distinctive bass style (which he says he’s still perfecting every day) spawned acts like Firehose and The Missingmen. Last year, he concluded a five-year stint touring with Iggy Pop and The Stooges.

“It was a lot of festivals, so a lot of days off,” he said. “And then to get to play with The Stooges, well, that was neat.”

Watt is one of the hardest workers in the business, and he makes no bones about the role that plays in his success.

“A lot of stuff in my life has had a heavy luck component,” he said. “But you have to work with that to make things happen.”

His now works with a trio, Il Sogna del Marinaio, that started in 2009 with an invitation to play a series of gigs with two experimental musicians from Italy.

In 2009, Watt toured Europe with musicians Stefano Pilia and Andrea Belfi, teaming up with them again in January of last year to record. They finished La Busta Gialla — a departure from anything that Watt has done to date — in three days. Watt said that he learned a lot from the tour and his bandmates during the lightning-fast recording session.

“When you stop learning, you stop living,” Watt said. “As you get older, there is a tendency to get set in your ways.”

Watt said that learning from both musicians was the major reason for agreeing to do the project.

“They had a lot to teach me, and not in some chalkboard academic way,” he said. “It’s just them being them. And they are very sweet, good guys.”

Pilia wasn’t at all intimidated by working with a prominent figure like Watt.

“In some strange ways, I immediately felt a sense of familiarity with him,” Pilia said. “I have a lot of respect for Mike. He is a big inspiration for me musically and ethically. I really respect him for his strong and deep humanity sensibility.”

With their second album, Canto Secondo, they wanted to capture an organic, improvisational feel, so the trio retreated to a beautiful, 200-year-old farmhouse in rural Italy and recorded the record in eight days.

Il Sogna del Marinaio will perform selections from both albums — plus some surprises — on its current tour, which includes Thursday’s stop at VZD’s Restaurant & Club.

Watt is excited to show his bandmates the open American road on this tour “in the boat,” as he affectionately calls the van. This isn’t his first trip to OKC; he has some special memories of local venues and celebrities.

“This is my third Halloween trip to OKC and not the first time I’ve played VZD’s. It’s a great venue,” he said. “I like the people [in Oklahoma City]; they’re always kind. You’ve got some crazy weather there. That’s for sure. I don’t know, maybe that’s what makes the people there so genuine. We’ve always had a good time, even back in the day when we were crashing on the floor of the opening band.”

One moment in particular stands out: when this crazy-haired young fan came up oozing enthusiasm for Watt and his band.

“The guy was wearing a name tag from Long John Silver’s,” Watt said. “It said Luigi, and that’s how he introduced himself. It was later that we realized it was Wayne Coyne.”

But most of all, Watt is excited to show off his compatriots in this latest journey and hear the feedback from one of his most experimental albums to date.