When Elizabeth Larios volunteered to go door-to-door with Oklahoma voter registration forms, she imagined meeting nonvoters and those who had never before participated in the democratic process.

As she ventured into neighborhoods near Oklahoma City’s SW 29th Street — an area with a vibrant and growing Hispanic community — she was greeted with a range of responses.

At times, within seconds, Larios heard comments like, “My vote doesn’t matter” or “One vote wouldn’t change anything.”

“They would ask, ‘What is voting going to do?’” Larios said.

The longtime Moore resident explained voting was a direct way to influence important issues affecting the community and hold elected officials accountable. Larios, who is Hispanic, encouraged them to complete the one-page voter registration application and vote in upcoming elections.

Now, as an Independent candidate in House District 54, Larios knocks on doors to share about her own campaign and discusses topics like health care, education and human services with residents in southeast Oklahoma City, Valley Brook and north Moore. She still carries voter registration forms, but she finds many people are registered and ready to vote in the district that begins just 20 blocks southeast of where she tried to mobilize voters years ago.

“It wasn’t hard for me to think of politics when I decided I wanted to make changes,” said Larios, who moved into House District 54 as a sixth-grader after her family relocated from Harrah. “I grew up in a place that encouraged politics ... Had I grown up in southside Oklahoma City, I might not have seen the importance of voting or known of politicians coming to my door.” 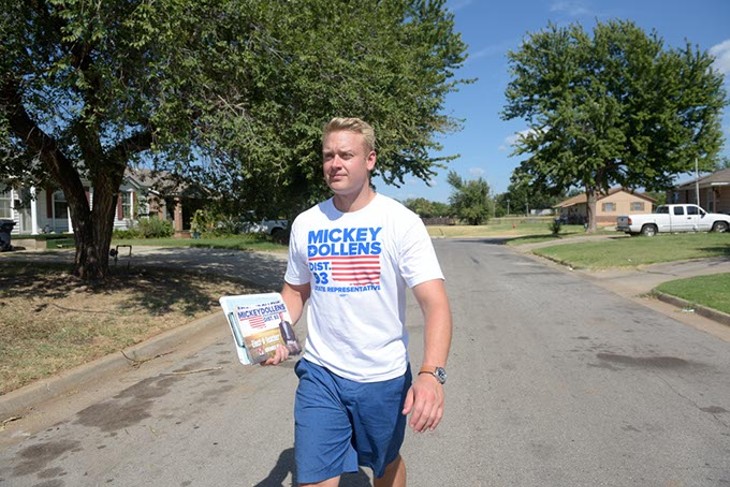 Who will be at the polls?

This November, Oklahoma voters will cast ballots for president, weigh in on myriad state questions and determine numerous state and local races.

In recent years, Oklahoma and other states have struggled to attract voters to the polls. Nationally, voter participation was down for the 2014 midterm elections. Oklahoma posted the second-lowest voter turnout in the nation as 34.2 percent of eligible voters cast ballots, according to a U.S Census Bureau report.

Nationally, older and wealthier people tend to vote more frequently than the young and the poor, the data shows. Whites and blacks vote more regularly than Hispanics and Asians. Will those trends continue as the American electorate continues to diversify? According to Pew Research Center, 31 percent of the electorate will identify as Hispanic, black, Asian or another racial or ethnic minority in November. Research shows young Hispanics, followed by Asians, are the driving force behind a diversified voting population. Most growth in the electorate has come from naturalizations, or immigrants becoming U.S. citizens.

In Oklahoma, Hispanics comprise a significant and growing portion of the population. U.S. Census data from 2010 recorded 16 percent of Oklahoma County residents were Hispanic, compared to 9 percent a decade earlier.

“It all goes back to public education and safety,” Dollens said. “Minority communities want what everyone wants: opportunities, security and the best opportunities for their children.”

Jay Means, the Republican in the race, detailed crime, illegal immigration and high taxes as the issues he hears about from voters. Means has yet to encounter a person uninterested in democracy or a nonvoter.

Further east, in House District 92, Republican candidate Joe Griffin said he speaks with the public about safety, which is a concern among all ages, races and ethnicities. The district runs through parts of south OKC and downtown and weaves into some northwest neighborhoods.

“The stories are the same,” Griffin said. “They are concerned about jobs, not being able to come home and sleep safe night. People want a safe place for their kids.”

Forrest Bennett, a Democrat running for the House District 92 seat, introduces himself to residents at their doorstep and asks about their concerns.

“It opens the door to a good conversation and we can really get to the heart of the manner,” Bennett said. “I hear a lot about education, pensions and jobs.”

Bennett describes south OKC as home to many Hispanic families and older, longtime residents. In downtown and into Midtown, the candidate meets younger residents who tend to lean more liberal.

“You have to know what your district looks like and make sure you are representing the people in your district,” he said. “What I’ve learned is a lot of people feel like politicians go up to the Capitol, worry about their own issues and not the issues they heard when campaigning.”

“If you only cater to a small base,” Griffin said, “you are disenfranchising the others.”

In 2014, Shane Stone, a construction superintendent, was elected representative of House District 89. The southside OKC district is home to many Hispanic families. Stone refers to the area as a majority-minority district, meaning a majority of the constituents are part of minority populations. It’s no easy task to represent these communities, explained Stone, who is white. When non-English speakers call his office, he calls them back once a translator can join the call. Additionally, he often attends community events, introducing himself to people and gauging constituents’ attitudes toward state issues.

“As an elected official in a majority minority district, it is very easy to forget about the minorities you represent,” Stone said. “You have to remember its your job to get those people engaged, let them know about services available from the state, but also let them know their voice will be heard if they get out and vote regularly.”

It all goes back to voting. Hispanics, minorities and millennial voters ages 18 to 35, as defined by Pew Research Center, could influence government by casting ballots in November.

Those who don’t vote have reasons ranging from political confusion to untrustworthy politicians.

“I get it,” Bennett said. “Washington and the state Capitol are not doing a whole lot to make the average person enthusiastic about following politics.”

“There is a lot of frustration out there on a local, state and federal level towards politicians who are just willing to kick the can down the road,” Griffin said.

“One of the most surprising things I’ve learned is how much people have to say,” Dollens said.