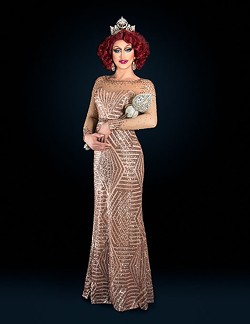 Dating back to its first competition in 1972, Miss Gay America has established itself as the preeminent pageant for drag performers across the country. And Thursday and Friday at Angles, 2117 NW 39th St., is the setting for Miss Gay Oklahoma America, the state preliminary competition for the 44th Miss Gay America pageant.

As the world’s first and longest-running drag pageant, Miss Gay America has grown in status to become something of a cultural touchstone. With contestants over the years that have included some of the biggest names in drag, Miss Gay America is the stuff female impersonator dreams are made of.

It certainly was for Carmen Deveraux, a Norman native and 2015 Miss Gay Oklahoma winner, who will be honored at this year’s Oklahoma City competition. Growing up, Deveraux was vaguely familiar with drag culture and always intrigued by the glitz and glamour of performing.

“I’ve always loved painting and drawing and singing and dancing,” Deveraux said. “Drag puts everything together — it’s hair, fashion, choreography, makeup and everything I love rolled into one.”

As a highschooler, Deveraux worked as a “rhinestone boy” at Southern Charm dress shop in Norman and would create gowns for pageant girls, proms and drag queens.

“At that time, when I first started, it was the time for Miss Gay Oklahoma; I was first introduced and completely captivated by it all,” Deveraux said. “I got to meet all of these people, and I remember thinking, ‘Oh, this is a thing here in Oklahoma?’”

Gaining some experience at The Wreck Room and other local gay bars and clubs, Deveraux developed her stage persona and immersed herself in Oklahoma City’s underground drag culture.

“I wanted to be glamorous, of course, but I also wanted to look toward other performers who had an odd personality and didn’t take themselves too seriously,” she said. “Kind of what I modeled myself after was basically a really pretty alien, but with a fun personality. I loved to just see people’s eyes light up and get really big like ‘What the fuck is she doing?’”

While she had already won several bar titles, Deveraux always knew that Miss Gay Oklahoma America was the state’s premiere pageant and meant for serious performers. While a lot of drag queens haven’t ever won or even been honored as first alternate, Deveraux managed to make her mark her first try.

“I competed at Southern Charm, which was a preliminary last year, and I got first alternate and went off to state and then won there,” she said. “First year and I won, which I’m really glad about because it was a lot of work and I’m glad I don’t have to do it again.”

Now she can focus on the upcoming preliminaries, which has a Bollywood Nights theme and features Miss Gay America 2016 winner Asia O’Hara being honored alongside the main competition.

Deveraux said she is excited to be a part of this year’s pageant process, even if she isn’t competing. If anything, she’s just eager to help represent Oklahoma drag culture. She thinks events like Miss Gay Oklahoma are important now more than ever since Oklahoma is one of the more conservative-leaning states in the country.

“These pageants show everybody not to have fear, to stand strong against what’s wrong and celebrate love and happiness, which is all you get from going to a drag show or pageant,” she said. “A lot of people ask me about living in Oklahoma and it being so backwards, and I mean, our governor may be conservative, but our drag queens certainly aren’t.”

But Deveraux also admitted there are some benefits to be had from working under Oklahoma lawmakers.

“It definitely opens up a lot of doors for making fun of our politicians onstage, which people always get a kick out of,” she said. “There are just countless jokes about [Rep.] Sally Kern and [Gov.] Mary Fallin that we love to make and will continue to make. So in a way, it’s like, ‘Thanks for being such a shitty politician so I can make more money.’”

Regardless of what jokes are made or who wins, Deveraux hopes audiences leave this weekend’s pageant with an appreciation of drag culture and what it means to the performers onstage.

“You’re going to leave buzzing, and I hope everyone leaves feeling able to see so much love onstage and a sense of feeling and community in such a historic moment,” she said. “This’ll be the 39th Miss Gay Oklahoma, and we’re gonna be celebrating all past queens. It’s a sisterhood with such strong ties, and I just hope everyone feels as inspired to love and support each other as we do.”