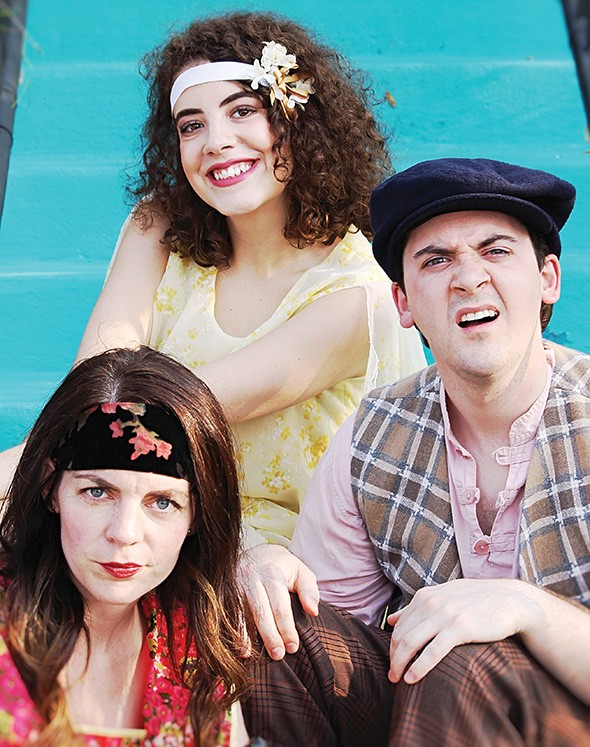 The Comedy of Errors

For Oklahoma Shakespeare founder and artistic director Kathryn McGill, some of the laughs in The Comedy of Errors come from attempting to describe the plot.

Oklahoma Shakespeare’s production of William Shakespeare’s The Comedy of Errors runs June 6-29 at Myriad Botanical Gardens’ Water Stage, 301 W. Reno Ave. For anyone who might still be confused, let us turn now to that venerable text consulted by generations of “scholars,” CliffsNotes.

Everybody got that? If not, McGill would not be surprised.

“I think that in order to really understand the plot, you’ve got to see the play right out in front of you,” McGill said.

Funnily enough, McGill said Oklahoma Shakespeare chose The Comedy of Errors because it is so easy to follow when performed onstage.

“We’re in a very public place,” McGill said. “We’re in the Myriad Gardens, which is really the heart of Oklahoma City, and there’s a lot of distractions down there — airplanes flying over your head, a lot of people in the park. It’s easier to keep people’s attention and to overcome a lot of the distractions if you’ve got a comedy where it’s raucous to begin with. It’s hard to have a quiet, intimate moment, let’s say, so we just kind of discovered over the years that either we do a big, very active play like Macbeth or we do a comedy. Those just seem to work better in that atmosphere.”

The play also serves as a good introduction for young viewers unfamiliar with Shakespeare’s work.

“Because of the success of last year’s A Midsummer Night’s Dream, we wanted to really focus on another family-friendly show, a show where parents can bring their kids and introduce them to Shakespeare,” McGill said. “Comedy of Errors is one of those really accessible plays that’s funny and simple enough for most people to understand and appreciate.”

Director D. Lance Marsh, McGill said, “is really good at this sort of comedy,” and while the concept of two sets of identical twins with the same names might read like a logistical nightmare, Oklahoma Shakespeare, which McGill said is staging the play “probably the fourth or fifth time” in the company’s 35-year history, has learned to make it “very clear to the audience who is who.”

Tyler Malinauskas plays Dromio of Ephesus and Jordan Nicholes plays Dromio of Syracuse; Dustin Dale Barlow plays Antipholus of Ephesus and Sam Pinson plays Antipholus of Syracuse. If the audience is able to follow the mistaken identity plot without becoming as confused as the play’s characters, McGill said The Comedy of Errors is actually one of Shakespeare’s least complicated plays, a slapstick she compared to The Three Stooges.

“There’s not, like, three or four different plots that he’s juggling,” McGill said. “In Midsummer Night’s Dream, there are three distinct plots and they all tie in. This is pretty much one idea, and it’s his shortest play as well. It’s one of those plays that are great in a season because it’s kind of a no-brainer. People come and they know they’re going to be entertained, and you just kind of have to leave your reason behind and not worry too much about, ‘Could this actually happen?’ ... The idea of two sets of twins, he’s probably pushing it a little bit there, but it’s the same with most of his comedies. They’re about people in extreme situations who are responding to a specific problem, and the fun is watching them get out of the problem.”

"I think that in order to really understand the plot, you’ve got to see the play right out in front of you."—Kathryn McGill tweet this

Considering Shakespeare is credited with inventing the saying “Brevity is the soul of wit,” (Hamlet Act 2, Scene 2) it seems appropriate that Comedy, which premiered in 1594 and was one of the Bard’s earliest play, has the shortest runtime of all his plays.

“You can take one joke and stretch it out till it’s not funny anymore, but he knows when to stop,” McGill said, “and that’s why it’s short. It’s all about ‘Let’s explore this idea, then let’s end this play now because I think I’ve done all the exploration I can do about this one idea.’”

The brevity and simplicity of the play allow Oklahoma Shakespeare the opportunity to alter the setting. The play remains in Greece, but McGill said Marsh has moved the timeline to the 1920s for an aesthetic he described as  “Mamma Mia meets Zorba the Greek.” Ideally, McGill said, The Comedy of Errors will offer a different experience than some theatergoers might expect from Shakespeare’s work.

“Hamlet or Romeo and Juliet, the more serious plays, are what people normally think of when they first think of Shakespeare,” McGill said. “They think he’s kind of dry and old-fashioned … but this is not too serious and we shouldn’t take ourselves too seriously. … The audience should come prepared to be entertained. This is not one of those deep-thinking pieces that you’re going to go home and analyze and talk about. It’s a farce, and it’s meant to be enjoyed.”