An exhibit at FJJMA explores the links between art history and modern art. 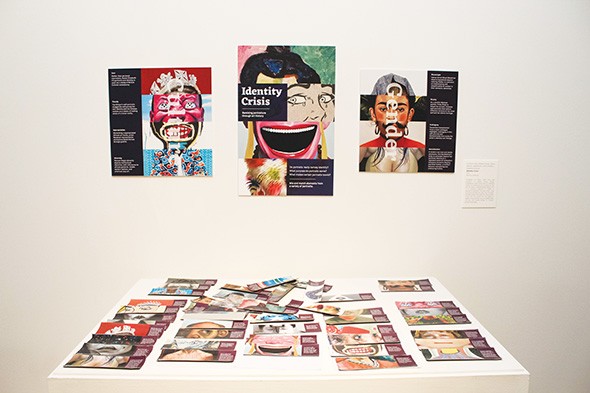 If you’d rather look at the pictures than read this article about an art exhibition, some of the educators at University of Oklahoma might understand.

Visualizing Art History, an exhibition of student projects on view in the museum’s gallery through Sunday, shows the results of an experiment in communicating important concepts in the evolution of contemporary visual art without simply writing or lecturing about them. Robert Bailey, an associate professor of art history, challenged students in his class to put down their pens and Blue Books and demonstrate their knowledge of the course material by creating group projects that could be displayed in an art gallery.

“A lot of my research involves conceptual art, which often uses language,” Bailey wrote in an email interview. “Because language is traditionally my medium as an art historian, this piqued my curiosity about a reversal of sorts. Might visual mediums bear art-historical knowledge? I figured that my contemporary art course would be a good place to explore that interest because the majority of the students in it were art or design majors with the requisite skills to visualize things. We spent a portion of our time studying the history of contemporary art and a portion of our time thinking about how previous art historians have presented the results of their research visually. The exhibition brings all of this together.”

When Ski heard about the project, she became intrigued at the possibilities.

“Why not make art to explain art history?” she said. “Students who traditionally would write art history papers for their final projects … are trying to communicate ideas, themes and issues that come up a lot in contemporary art history in a more immediate way so that the visitor who interacts with each one of these projects will have a much quicker takeaway and have a very different experience than sitting down and reading a really long and wordy art history book.”

As the students began to develop their projects, Ski offered advice for designing compelling installations for museum display.

“I talked to the students a little bit about creating an engaging experience in the gallery and really tried to help them think about the visitors that would be looking at and interacting with their work,” she said. “I’m traditionally trained in art history myself, so this is a really exciting thing to watch develop as I worked with the students a little bit in terms of helping them translate these ideas into a museum context. I got to see some of their initial concepts and then watch the physical development of the pieces, and there’s something really incredible about that.”

Bailey, too, said he was impressed and inspired by the results.

“The assignment was experimental, so you could say that everything the students did surprised me,” Bailey wrote. “I can’t say yet whether using visual mediums necessarily results in a different kind of knowledge or in ideas that you can’t get from more straightforward written scholarship, but it certainly creates different possibilities for audiences to interact with art-historical thinking. … I would say that the biggest surprise was our collective recognition of just how much potential there is for visually reconfiguring how art history acquires its place in the world. Some projects used digital means, while some used very established materials and techniques; some involve audience participation or interaction, while some lean on more standard modes of beholding and reading; and some make knowledge available in really direct ways, while some work in a more roundabout fashion. That’s all really generative.” 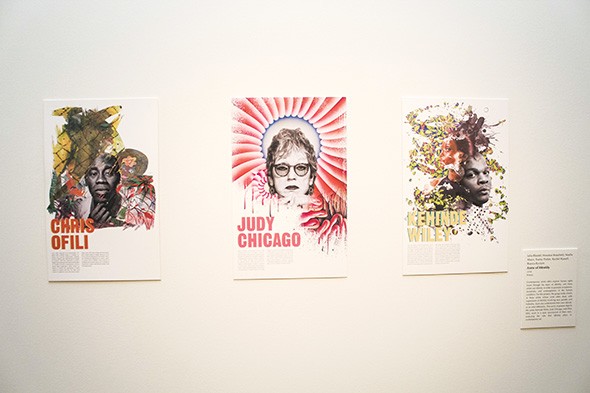 Some of Ski’s favorite installations offer viewers an interactive experience.

“There’s a section about portraiture and identity,” Ski said. “And what the students did is they divided up pieces from very well known portraits into strips — the eyes, the nose, the mouth — and the visitor can then manipulate those portrait pieces and this helps them link to the notion of how we manufacture identity, sometimes in a very purposeful way, thinking about even the way we represent ourselves on social media and take certain pictures of ourselves from certain angles. That is a very immediate concept you can translate to the audience while also making a bigger point about something in art history which is the way people historically wanted to be represented if they were making a certain statement politically or otherwise. So a simple hands-on activity can translate this very heady concept into something that is immediately understandable.”

Most impressive of all, Ski said, is a work that comments on the way modern technology’s impact on daily life affects aspects of modern art while subjecting the viewer to some of that technology.

“The best example in the space is called ‘Always Watching,’ and it is a piece about art and surveillance,” she said. “It’s a wall didactic; text on the wall explains how art and surveillance have developed over time, thinking about the post-9/11 world and feeling like we’re always being watched, and on top of that didactic there’s a projector that displays a live feed of the visitor in the gallery, so you’re learning about this very heavy conceptual idea, but you’re doing so by being a part of the work, and really maybe an unwilling or unexpected part of the work because you don’t know that you’re part of it until you walk up and start reading it, and then you recognize your own back.”

Are any of the student projects actually works of art? It’s possible, but the professor who assigned them would rather discuss their potential ramifications for the way we discuss art.

“Maybe,” wrote Bailey, “but I’m less interested in the answer to that question than in whether and how the students’ projects manifest art-historical knowledge in an unconventional setting and what that means for how art history connects with the public.”

By Ski’s standard, some installations in the exhibit offer viewers more than historical information.

“Maybe unintentionally, some of these pieces really did come out as well rounded artworks in and of themselves, at least by my view,” she said. “It does create some interesting questions about that subject in and of itself, and by doing so, I definitely think it’s pushing some boundaries and expanding on a lot of topics.”