Industry Gastro Lounge provides a sports bar experience with a scratch kitchen in an expansive setting. 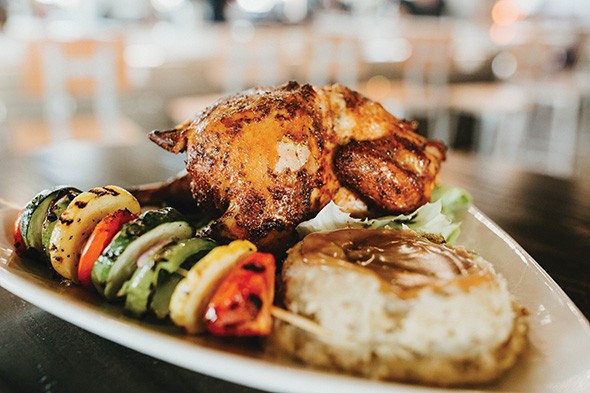 As Edmond real estate developer Bobby Kahkesh began to dream up the concept for his new restaurant, he wanted to fill what he saw as a void in Oklahoma City metro’s lack of a locally owned sports bar. But it wasn’t enough just to take over a turnkey building or situate televisions around beer taps.

The end result of a two-year planning and construction phase is gigantic and modern Industry Gastro Lounge, 2800 NW 140th St., that features a 7,000 square-foot dining room with two large bars in the center and a 2,500 square-foot wraparound patio with 160 seats that Kahkesh said, to his knowledge, is the largest in the metro.

“It felt like you really had to wrack your brain [to find a sports bar],” Kahkesh said.  “You’d have to have to go too risqué and go to something like a Twin Peaks, but families can’t really go there.”

The building designed by RBA Architects features space for future valet service outside the entrance, a hip lounge area and a sleek and hip interior décor. It opened at the beginning of October.

It took everything [I have], but that’s just how I do things and how I got here. I go big or go home, for real.Bobby Kahkesh tweet this

“We wanted to captivate people with the building and design,” Kahkesh said. “We wanted something that would stay with us for awhile but also be cutting-edge and interesting.”

Kahkesh, 42, owns commercial strip malls in Edmond and Frosted Mug Grill & Big Bar at 1800 S. Meridian Ave. He operates Industry Gastro Lounge, which has the flash of a corporately owned establishment, as the sole owner.

“There are not a lot of one-offs that get in at this scale,” Kahkesh said. “Usually it’s IPO (initial public offering) money that takes something to this level. I’m just a local kid homegrown and have been in Edmond since I was 5 years old. It took a culmination of everything I’ve done. I cross-collateralized, refinanced everything and rolled all of the dice to bring this out of the ground. When you’re doing a $3.2 million deal, it takes a lot. It took everything, but that’s just how I do things and how I got here. I go big or go home, for real.”

Kahkesh said that he wants Industry Gastro Lounge to be equal parts sports bar and upscale gastro lounge with a majority scratch kitchen that hand-cuts steaks and doesn’t freeze meat.

“You get bored when you go sit in a pub that’s just a bunch of beer tap handles,” he said. “It’s why we wanted to make it more exciting with live events. We have DJs on the weekend. We got something going for lunch, dinner and after hours.”

Three glass doors at the front of the dining area — near a lounge area with designer couches — are retractable, opening to the large patio area. Industry has already featured live music performances inside but will have a monthly concert series on the patio beginning in spring 2019.

The menu features pub classics like fried appetizers but also has soups, salads, steaks, burgers, pizzas with a gluten-free crust option and its most-popular item: smoked beer can chicken.

“The beer can chicken is smoked every morning,” said Jeremiah Ensz, who served as Industry’s general manager before taking another opportunity at the start of December. “It’s not a three-day-old bird that’s been sitting. It goes in the smoker with a [Pabst Blue Ribbon] can [and] hickory chips and [is] served with the can of beer inside the bird. It is super delicious. It’s a good, diverse menu. If you want to put your pinky out when you cut your meat, we’ve got a filet for that. If you want to get in and out, we’ve got a burger for that.”

“Hand-cutting steaks all comes down to technique,” Ensz said. “If you cut the steak along the grain of the meat the wrong way, it will come out tough. If you tenderize it just right, it won’t cook through and be charred on the outside and rare on the inside. There is more technique in cutting a steak than most people think. If we’re cutting a rib-eye or New York strip and we cut it too lean, it won’t have the fat cap on the back you need to give it that great flavor. If a sirloin is too thin, it won’t cook right.”

Industry’s two bars have retrofitted its on-tap beer offerings since initially opening, putting more focus on local breweries. The beer travels along an intricate glycol cooling system housed in aluminum piping traveling overhead in the dining room from taproom to glass for a unique aesthetic feature.

Kahkesh said he has been pleased with the support from the community, which supported overflow parking its opening weekend, and noted that it takes about 90 days to square away the logistics of a brand-new kitchen. Feedback has been so positive that Kahkesh has secured a location for a second Industry Gastro Lounge in Moore and is tentatively eyeing a spring 2020 opening as well as a Tulsa location in the future.

“It’s going to be a busy four or five years for us,” Kahkesh said.