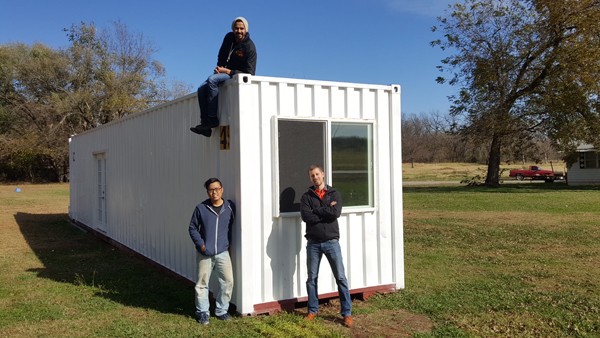 ModernBlox is working to change the way you live and do business. The secret lies in metal shipping containers. At least that’s what Lee Easton and his three co-founders are working to accomplish.

Lee Easton is an Oklahoma State University (OSU) alumnus who lives in Stillwater, which is where his building ambitions are accomplished. He and co-founders Askari Addison, Swapneel Deshpande and Ben Loh convert metal shipping containers into homes and business units that can be delivered anywhere around the world.

ModernBlox was launched after one of the co-founders entered a business plan into a contest. It won, but it wasn’t until years later that the business idea was revisited. On the ModernBlox website, the founders take pride in being men who love to build things. Add to that a cofounder with a background in real estate and property, and the business plan materialized into a business venture.

“I think it’s just a mixture of all our passions, experiences and entrepreneurship to build things into this business,” Easton said.

The group is working with a sub-contractor who is allowing the men to use his land to build prototypes that will be used as touring demo units. The converted shipping containers are mobile and can be ordered over the Internet in a standard size.

“The long-term goal is to buy more land in Stillwater, get a crane and a high-end front loader and build coffee shops, restaurants, and then set it up to where anyone can visit the website and purchase their order, a home or pop-up business storefront,” Easton said.

The containers adhere to building codes and housing standards and have basic amenities such as electricity and heat. The co-founders invited architects, professors and Gov. Mary Fallin to examine their prototype.

“As soon as you step into the container, you don’t feel like you’re in a metal box,” Easton said.

“On the inside, from the bathroom to the sink to the windowsill to the lighting fixtures,” Easton said, “they’re all a very straight-edged and straight-lined design so it fits the interpretation of the modern art.”

High-quality material is used inside the units that are purchased at a standard size of 45-by-8.5-by-9 feet.

“You’re looking at 360 square feet when it’s all said and done,” Easton said.

Right now, the men are working with individual units. They’re also experimenting with constructing additional pieces that can be attached to each other to expand the containers horizontally and vertically. 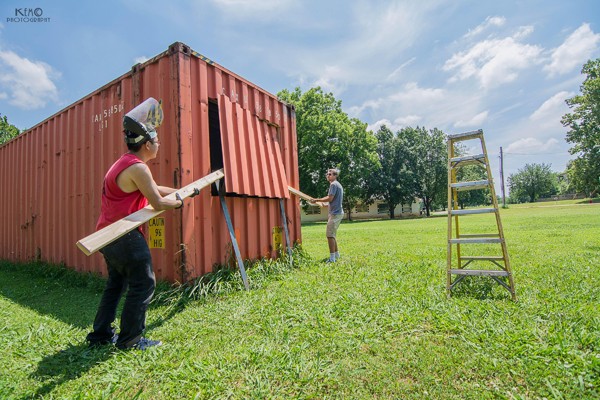 The original intent for the containers was to follow the trend of building small living spaces. While the first prototypes comply with that consumer demand, ModernBlox’s long-term goals will change. Those changes include selling containers to American Red Cross to house victims of natural disasters or to NASA for space exploration efforts.

The containers are built to weather strong winds and turbulent weather, such as tornadoes.

“Our target market is essentially anyone who needs a house, but we’re starting to see developers that order products in high quantities that need to extend houses, apartments or small communities,” Easton said.

He is working toward economies of scale, where he is able to build more units at half the cost. That will enable organizations that need large orders of living spaces to buy more for less.

ModernBlox’s founders have plans to expand, but for now, they’re concentrating building efforts in Stillwater until there are enough resources to move beyond that space. In the future, expansion will depend on the company’s ability to get access to the material and capital it needs.

The first completed prototype is expected to go on tour in two months. Its first stops are Oklahoma City and Tulsa.

ModernBlox has an active website and Instagram account that keep followers updated on its work. Photos of small homes built in different neighborhoods and throughout history are also available. Visit modernblox.com and instagram.com/modernblox to learn more.