Moni’s Pasta and Pizza is a hidden Italian gem

The rise of retail districts across Oklahoma City is rewriting the way we talk about our town. Uptown 23rd District, The Paseo Arts District, 16th Street Plaza District, Bricktown, Western Avenue, NOMA — these are terms of location, yes, but also a shorthand for the way we feel about the metro. Each district elicits a different image, a different vibe and, in my case at least, a different flavor.

It’s another reason to identify with an area, which probably explains why so many of them are keen to be branded. Western Avenue is great for shopping. Plaza District enjoys an excellent nightlife. Uptown 23rd is filled with hip restaurants.

In an area that some think is Edmond but is actually Oklahoma City sits a pretty little bistro tucked away in a nondescript shopping center. Owned by John and Rachel Foster since 2014, it has a strong following of locals that keep the tables filled and the kitchen busy.

But if you haven’t heard of Moni’s, I’m not surprised. It’s easy to miss, especially for those of us who don’t frequently venture north of Memorial Road. Maybe we need to come up with a district name to help people get over there? Let’s call it JOE (Just Outside Edmond) District.

Moni’s menu more than justifies the drive. Take a bite of the mushrooms crabmeat ($9.95) appetizer and you’ll know why. Mushroom caps are stuffed with crabmeat and drenched in ladles of Marsala cream sauce. A generous layer of mozzarella covers the tops before they’re baked in the oven, which helps meld the flavors for gooey, decadent mouthfuls.

Stracciatella alla romana ($4.95 cup/$5.95 bowl) is an Italian take on egg drop soup made with lemon, and it’s as weird and wonderful as it sounds. The broth is thin with wisps of egg throughout, and the distinct brightness and tartness of citrus is a wake-up call to the palate.

“We’re about to eat some great food! Put on your game face, taste buds,” it shouts.

This is also when decisions must be made. As much as I enjoy ordering two or three entrees at a time, Moni’s serves such generous portions that it’s unnecessary.

Those in the mood for chicken have a few excellent choices. For the “wow” factor alone, chicken rollatini ($17.95) is a must-try. John aptly described it as “a small planet landing on a plate of pasta.”

The chicken is pounded thin and then stuffed with cheese and basil before it’s rolled in batter and fried to a deep brown. The entire dish is covered with a creamy pink sauce with mushrooms. 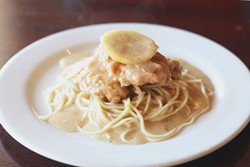 Francese ($15.95) is more straightforward but equally satisfying. Chicken breast is battered in egg wash and sautéed, producing an airy, crunchy crust that soaks up the white wine and lemon sauce underneath. To make sure you don’t miss a bit of the flavor, the spaghetti base catches the extra sauce and any pieces of breading that evade your fork.

I was most impressed by shrimp fra diavolo ($19.95), which purports to be spicy and actually follows through. Translated as “shrimp among the devil,” it’s a classic Italian dish that brings the heat. Moni’s graciously allows customers to choose their preferred spice level, as one would do at a Thai restaurant, for a plate of pasta that stings without singeing the taste buds.

Shrimp, which are mostly water anyway, soak up the sauce to provide a burst of spice every few bites. I ordered a two out of five and thought the heat was perfect for an interesting dish that didn’t require a cool-down period between each forkful.

Though complex sauces can be fun, the classics are called that for a reason. That’s the ethos of linguine broccoli ($13.95), which is basically just what it says. Thick strands of pasta are tossed with olive oil, garlic and crushed red pepper and topped with crisp broccoli florets. It’s simple, delicious and the kind of homestyle Italian dish I think everyone appreciates.

I like it as a vegetarian option, but if you think a meal isn’t a meal without meat, chicken can be added for $2.95.

All pasta dishes include a choice of house or Caesar salad and tasty dinner rolls basted in garlic sauce, which is especially nice if you’re dining with kids who absolutely need to eat right this second. Prospective parents take note: Snacks before the meal are necessary for everyone’s sanity.

The DiAngelo pizza ($12.95-$21.95) is probably not right for kids, but adult palates will find much to love in the pie’s spicy fra diavolo sauce and sliced Italian sausage. But the pièces de résistance are the soft-fried eggs on top.

What a combination! The pizza is studded with pieces of red bell pepper, adding a sweet crunch, and the combination of sauce and sausages has just the right amount of sizzle. The cheese does an admirable job holding it all against the hand-tossed crust, but the egg brings it all together. The slow-running yolk encases the toppings in a luscious layer of fat that balances out the heat.

The Fosters said they plan to expand Moni’s, including opening a patio and putting together a more comprehensive bar. That might not be enough to warrant an entirely new district, but for JOE, it’s not a bad start.

What works: The fra diavolo sauce is actually spicy.

What needs work: The restaurant is pretty isolated.