More than a land acknowledgement

The First Americans Museum offers a rare glimpse into the lives and cultures of Native Americans who call Oklahoma home. 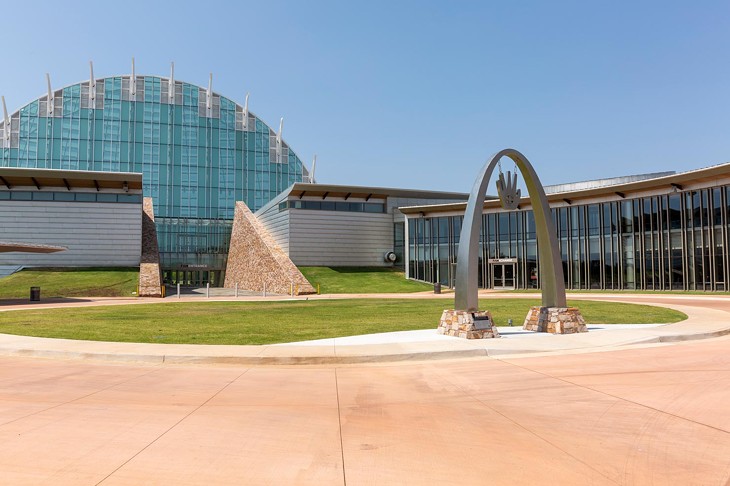 The story of The First Americans has historically been one of stoic Chiefs in headdresses, mystical medicine men, winsome Indian princesses, and blood-thirsty braves awaiting their moment to attack. With the opening of the First Americans Museum (FAM) on Sept. 18, that narrative is about to change.

Featuring first of their kind exhibitions, thoughtfully assembled by the world’s only team composed solely of Native curators, FAM stands as a true representation of what it means to be Native in a country that declared their independence by referring to Natives as “merciless Indian savages.”

Originally named The American Indian Cultural Center, the 40-acre campus, 659 First Americans Blvd., was rebranded in 2019, setting the stage for a space that, with the input and guidance of the Tribal Nations, brings a diversity to Native representation rarely seen.

To visit FAM is to take the first step into a history never before told and a present that celebrates the distinct and modern cultures of the 39 Oklahoma Tribal Nations and their futures. The following is a guided walkthrough of the completed portions of the FAM opening to the public this month.

Visitors are immediately invited into the world of the 39 Tribal Nations currently calling Oklahoma home with a stunning stainless steel sculpture, Touch to Above, by Cherokee father and son team Demos Glass and Bill Glass, Jr. The arch sits in the middle of the circular courtyard and, like the building itself, faces east. Soaking up the first light as the sun rises, its beauty reflects a prayer to Creator, whom many Nations believe resides in the east. Cultural touchstones like this throughout the museum serve not only to educate but differentiate among the cultures and beliefs unique to each tribe.

With “This has always been Indian Country...” emblazoned in stark white letters on an inky black background introducing the Land Acknowledgement, it’s made clear what one can expect as they move through the lives of its original inhabitants.

Erb. Using compelling illustrations that seem to dance across the walls the piece brings to life the story of The First American Peoples, setting the tone for the foray into the untold histories and modern accomplishments of the Indigenous Nations.

The Origins Theater is housed in an enormous recreation of Caddo pottery representing Sky, Earth, and Water, conceived by artist Jeri Redcorn, Caddo/ Potawatomi, and brought to life with the assistance of Diné Marwin Begaye and Muscogee Creek Starr Hardridge.

The theater features the creation stories of the Pawnee, Euchre, Caddo, and Otoe-Missouria. Though each Nation has varied cosmology, these origin stories tell of stars/sky, water, and Earth, near-universal elements contained in the various traditions.

The two main exhibitions, OKLAHOMMA and Winiko: Life of an Object, work in tandem to address misconceptions and distortions that have over time been woven into truths that make up the DNA of the United States. Each takes you on a journey of the Peoples and their cultures, allowing for each Nation to be presented as they truly are as opposed to how they are believed to be. 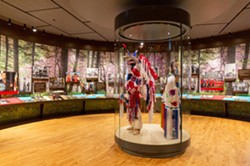 In the Tribal Nations Gallery OKLAHOMMA, Choctaw for Red People, is an interactive, multimedia experience that transports guests into a detailed timeline of the Tribal Nations. Ancient Roots: We Were Always Here begins before colonization with a portrayal of life as it was, vibrant Nations each with their own cultures, traditions, and histories.

As you move through the exhibit the lush greenery of pre-contact slowly drains of color as you enter Uprooted: Ripped From Our Homelands. During this dark period, the First Americans were forcibly removed from their ancestral lands. In respect to Native oral traditions, the stories of removal are told by Elders whose family histories are colored by the loss of sacred lands and Knowledge Keepers as colonization marched westward, leaving devastation in its wake.

Even as their lands and lives were taken the Nations persevered. Transplanted: Growing Strong emphasizes the renewal of the spirit of the Nations who successfully re-established themselves and takes us to today where their cultures flourish as the Nations grow ever stronger with the restoration of their sovereignty and self determination.

Living Landscapes addresses misrepresentation by immersing the viewer into a modern Native experience. Stereotypical images lose their power as First Americans Artist creations illustrate how they see themselves, as they are taken on a road trip in a Pow Wow van that showcases dances from tribes across the state, and as they are given the opportunity to learn about outstanding Native athletes and participate in traditional games such as Handgame and Chunkey.

A tribute to their Warrior spirit concludes the exhibition with a tribute to Native service members, many of whom fought bravely for a country that refused them citizenship. It features a database of soldiers who served that will become a living monument as more people are added, their bravery and service at last recognized.

Winiko: Life of an Object sees the return of items held by the Smithsonian collected from 39 tribes in Oklahoma in the early 1900s for the first time in 100 years. Located in the second floor mezzanine, Winiko not only allows attendees to marvel at the beauty and craftsmanship of Native Nations but tells the story of why each item is significant to a specific tribe, how it was created, and the course it took from creation to collection to a return to Oklahoma. In doing so it demonstrates the harm done by cultural appropriation which can be addressed through respectful cultural exchange.

There are various attractions that honor the tribes by shining a spotlight on their lives’ truths.

The Hall of The People is a massive structure based upon a Wichita Grass House. The 10-foot columns that grace the Hall pay tribute to those who experienced forced removal, each representing the brutal ten miles a day the Nations were subjected to during The Long Walk.

The Remembrance Wall, construct- ed of Mskwabek stones named for a renowned Wabashni Potawatomi warrior, recognizes the original stewards of the land that became Oklahoma. It also serves as a sobering reminder of the loss of those forcibly removed to Indian Territory, many of whom did not survive the journey as well as a celebration of the peoples who fought to survive so their descendants might live.

The FAM mound is an incredible reconstruction of the Mississippian Mound Builders architecture. Several of the tribes forcibly removed are the descendants of this culture. The Mound and the adjacent Festival Plaza give way to an amazing view of downtown OKC, an intersection of the historical and the modern reflecting the parallel of the lives of the Nations.

The museum also contains a fine dining restaurant called The 39 that features Tribal inspired dishes made with local and Indigenous sourced ingredients, while the Arbor Cafe has a more relaxed atmosphere, offering traditionally based foods and specialty coffees. 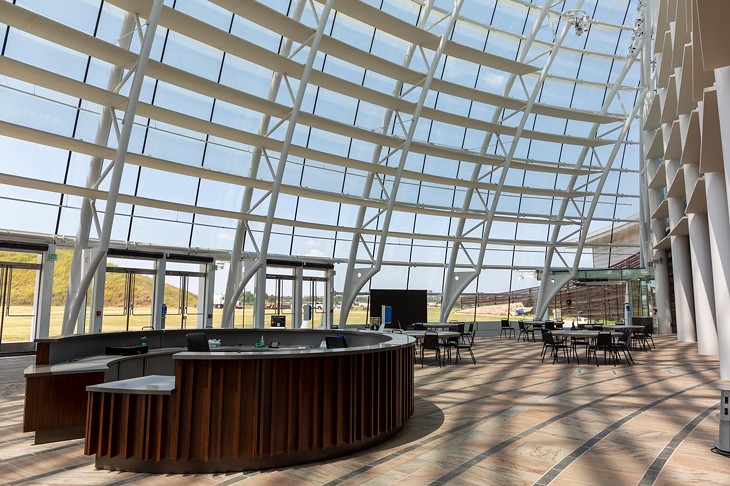 FAM will be offering family friendly educational workshops, activities and installations offering a variety of hands-on experiences that will both educate and enrich. The FAM Theater will present live performances and film, while the XChange Theater will present demonstrations and video presentations in addition to hosting special evening events.

The First Americans Museum grand opening is Sept. 18 and 19, beginning with The Procession of Nations followed by entertainment and activities throughout the day. Tickets are $5 for those over age 3 and must be purchased prior to the event.