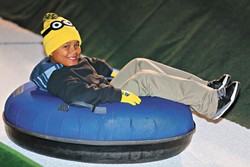 Snow tubing at Chickasaw Bricktown Ballpark, 2 S. Mickey Mantle Drive, has been a featured part of Downtown in December for the better part of a decade, but until last year, the slide was at the mercy of Mother Nature, much like the baseball games played on the field.

The event received an overhaul last year as it was rebranded as LifeShare WinterFest, and it expanded to include a winter wonderland throughout the entire ballpark, complete with Santa’s workshop and a train for children age 12 and under.

Separate slides were consolidated into one giant slide with three lanes at 145 feet in length, which requires riders to be at least 42 inches tall, and a lane at 75 feet in length. Organizers also made the decision to add a synthetic surface underneath the snow to ensure it could stay open. It previously had been snow-covered plywood.

“We’re at the mercy of Oklahoma winters, where it is as likely to be 75 degrees as it is to be an ice storm,” said Alex Freedman, director of communications for the Oklahoma City Dodgers, noting that in previous years, the slide had to close two to four days due to inclement weather. It remained open every scheduled day last season, thanks to the synthetic surface.

“It’s great for us and great for families that have planned this for a certain day,” Freedman said. “The new surface allowed us to be more predictable so that things will stay open.”

LifeShare WinterFest attracts approximately 20,000 guests to the ballpark on an annual basis, where 25,000 feet worth of holiday lights, mostly in Dodgers white and blue, will welcome them.

“Before last year, you pretty much just showed up for the slide and that was it,” Freedman said. “As an organization, we were stewards of the slide for Downtown in December, but we’ve added life to encourage people to mill around. It’s no longer just a slide in an empty stadium.”

Holiday-themed food and beverages will be available at the stadium’s concession stands. Children can write letters to Santa and participate in various winter activities around the stadium.

Single-session tickets for snow tubing are $13 for a two-hour unlimited periods starting at noon, 2 p.m. and 4 p.m. General admission for other activities is $3. Group tickets are available for advanced purchase at $11 per tuber for desired dates and sessions by contacting 405-218-2115.

As sponsor of the event, LifeShare will have representatives on hand to sign people up for organ donation.

Downtown in December began with a tree-lighting ceremony outside Bricktown Ballpark in 2001, but the origins of snow tubing are a little more fuzzy.

“Snow tubing has been going on in some shape or form for at least 10 years, but it’s one of the those things that predates the longest tenured employee here, so no one is exactly sure,” Freedman said.