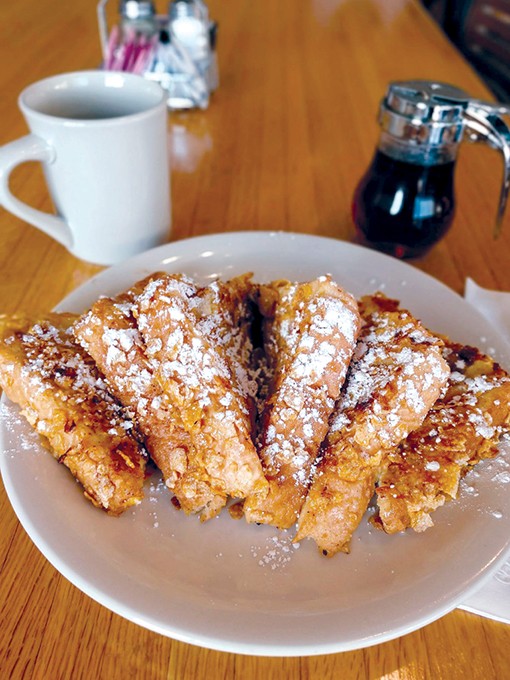 Mother’s Day 2017 was a difficult day for the Kahoe family, as the matriarch Carol died, but by Mother’s Day 2018, her son Brian and husband Jim Kahoe were hosting a packed house at a Norman restaurant named in her honor.

Carol’s Kitchen opened in early March at 2620 Classen Blvd. in Norman with a menu centered on down-home country cooking, fulfilling Brian Kahoe’s lifelong dream of operating a restaurant utilizing recipes from his mother and grandmother.

“We got together as a family and thought it would be a great way to memorialize her,” Brian Kahoe said.

“She and I had talked for a couple of years about setting him up with a restaurant,” Kahoe said. “It has been a goal of his since I can remember. When she passed away, I decided that it was time to do something.”

The Kahoes — Brian is joined at the restaurant with his wife Hailey — found the location on Classen in a new strip mall after Kahoe said that he heard from people that they wanted a from-scratch country kitchen on the east side of Norman.

“This side of town 10 years ago was just fields,” Hailey said. “Across the street, there was a small apartment complex, some brush and an old farmhouse.”

“The road here in the 1950s and ’60s had the main gate with a guard shack going to the Navy base, and where the Walmart store is was a trailer park for 50 years.”

Kahoe was born and raised in Norman before leaving at 18 years old to join the Air Force. He served a one-year tour of duty in Vietnam, sent to the frontlines in Da Nang at the escalation of U.S. troop involvement.

He has remained a world traveler, working in construction in far-flung locales like Saudi Arabia, Algeria, Venezuela and West Germany. He met Carol in his 40s when he moved back to Norman, and they got married and he became a father to her three children and had another together.

“One of her main goals was for all of the kids to get jobs and an education,” Kahoe said. “She worked in the car business for over 30 years and served as comptroller for seven dealerships at the same time.” 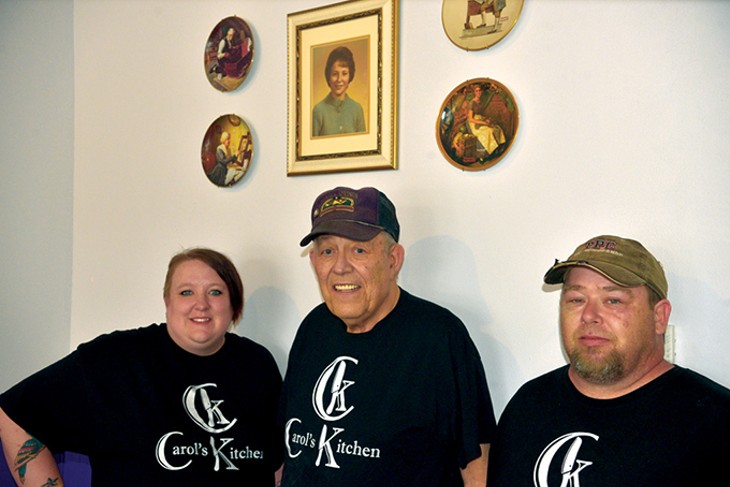 His mother’s hard work rubbed off on Brian Kahoe, as he took trucking jobs across the country. With every roadside diner stop, he made it a challenge to see if their version of chicken-fried steak held up to his own family recipe.

“I couldn’t find one,” Brian Kahoe said. “There was a place in Texas that was close. Most places you go in town, it is frozen [and pre-breaded] chicken-fried steak, and fresh ones are devoid in this town. It’s always been my favorite, and it was my grandmother’s favorite.”

Fresh chicken-fried steak is a breakfast or lunch staple for the restaurant that is open 6 a.m.-2 p.m. seven days a week. Homestyle breakfast plates range from $5.99 to $12.49. Skillet breakfasts, a hash of meat, veggies and two eggs are also popular, but there is even a vegan skillet option, but it’s one of the few items without meat.

“We may not be the most health-conscious place, but it tastes good,” Brian said.

Carol’s Kitchen features two daily specials — one breakfast and one lunch — but the Kahoes stressed that the kitchen will prepare anything the customer requests as long as they have the ingredients. Brian said he has gotten many off-menu requests for the garlic home fries that have been a special feature.

The biggest concern for the Kahoes is managing expectations and crowds out of the gate. Brian said most of the complaints they’ve received are from people who didn’t want to stand in the line that snaked out of the restaurant on weekends.

“We’ve had a lot of repeat customers, and we’re starting to see familiar faces and building regulars,” Hailey said. “We’ve had a few bad reviews, but it’s usually a day that I can pinpoint to know what happened that day; it was usually a logistical mistake.”

The restaurant location has a built-in answer for those on the go: a drive-thru window that features a pared-down version of the menu focused on sandwiches designed to be delivered in about five minutes. The option might be unusual for a full-service restaurant, but the Kahoes said it has accounted for about one or two orders per hour.

As Brian and Hailey run the kitchen, Jim helps wash Mason jars that serve as drinking glasses in the restaurant. It’s the definition of a family-run operation.

“It’s been fun, stressful, crazy, beautiful and rewarding,” Hailey said.  “Working with my husband and getting to see my father-in-law every day has been wonderful.”