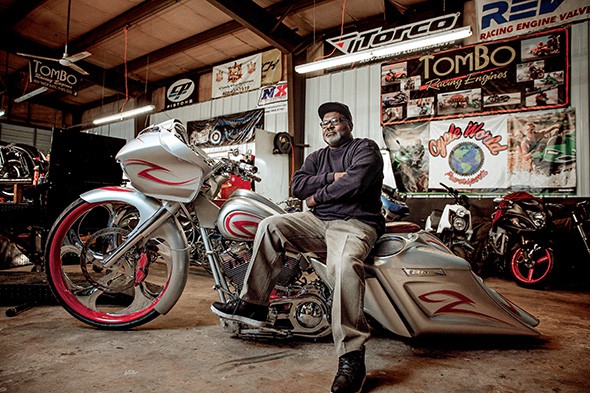 The first time he saw a motorcycle, Tommy Bolton knew what he wanted to be when he grew up.

“When I was about 6 years old, I started seeing them going up and down the street, and it was like, ‘This is what I want to do,’” Bolton said. “By the time I moved to California, I was consumed with dirt bikes, mini bikes, motorcycles and all that stuff. … At the age of 11, I was full-blown into this stuff. … I hung around different shops until I got old enough to go in them. … I would go to the dirt-bike tracks and watch them. I think I went to the drag strip for the first time when I was 14 years old, and I was hooked.”

“Tommy Bolton may not race a Harley, but he still demands respect,” wrote Bryan Wood, paying perhaps the highest compliment possible from a Harley Davidson forum. “As a top-level drag racer and builder … he racked up 25 major titles before he stopped to concentrate on tuning the bikes and building custom baggers.”

When he was 11, Bolton found a mini bike in the backyard at his friend’s house in Los Angeles and skipped school band practice to work on it. At the age of 15, he met “Honda” Jim McGlynn, who began taking him to motorcycle drag races across the country where Bolton honed his tuning skills.

At 17, Bolton got his first job at a motorcycle shop outside Beverly Hills. His father and uncle both rode motorcycles — and Bolton’s mother taught him to ride his first motorcycle, a Honda SL100 — but his father was not prepared to hear Bolton’s career plan.

“I told my dad, ‘I’m dropping out of school and going to work at a motorcycle shop,’ and he said, ‘What?’” Bolton said. “I had a little toolbox. I thought this was going to be it. I’m going to work on motorcycles, and my life will be set. I went up there for the first three weeks, and all I did was clean bathrooms. I was getting ready to quit, and they gave me a break and started having me set up motorcycles in the back. From that point on, I got my own stall and everything.”

But when the shop discovered he was supposed to be in school, they sent him back. Fortunately, his high school had started offering motorcycle mechanic classes and he was eventually able to continue working at the shop on weekends.

“I can honestly say, ‘This is the only job I’ve had,’” Bolton said.

He began drag racing motorcycles at the age of 19.

“By the mid-’80s, he began to receive notoriety as the first African American to go to the forefront of the sport,” wrote CycleDrag.com’s Jack Korpela in a 2017 profile. “In 1988, Bolton became the first to win top-10 plates in all of the major Dragbike USA categories. … In the early ’90s, Tombo ventured into the ultra-competitive world of [National Hot Rod Association] Pro Stock Motorcycle racing. He became the category’s first African American racer to receive a major sponsorship.” 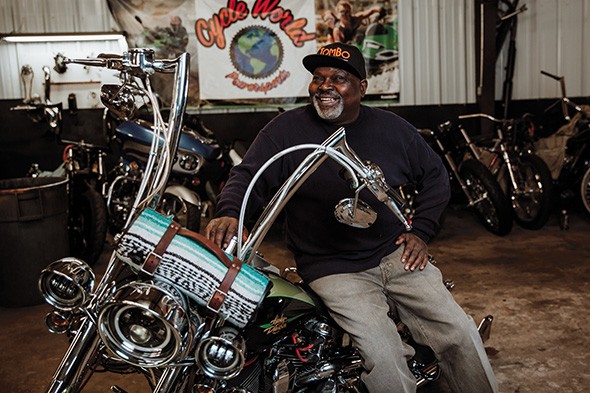 Because races are located across the country, Bolton moved to Oklahoma City in 1994 to be more centrally located. He opened TomBo Racing the following year. In addition to drag bikes, the shop also repairs and builds custom bikes and “bagger” touring motorcycles.

“I told Tommy if he could build it, I could ride it,” Nickelberry said in the July 1998 issue of Motorcycle Performance Magazine. “We just went from there.”

Nickelberry was the first African American racer to finish a quarter mile in less than 6.60 seconds and the second to go more than 200 miles per hour in a quarter mile.

Bolton, at the Texas Motorplex in 1990, was the first.

“It was surreal, but it made everything — all of the riding a bicycle up and down main street, learning how to ride, all the crashes that I went through — it made it all come full circle,” Bolton said. “When you’re going that fast, everything slows down. You can look up in the stands and see people. You can see somebody with a drink in their hand, and you’re like, ‘Whoa.’ It was crazy.”