Spending a week at summer camp can help a child make memories that last a lifetime. Children with developmental disabilities also benefit from the fellowship and camaraderie that camp brings.

JD McCarty Center for Children with Developmental Disabilities in Norman offers Camp ClapHans every year, giving kids with disabilities opportunities to swim, ride horseback, fish and sit around a campfire.

A local motorcycle group teams with the center to provide scholarships for youths who might need them. The fourth annual Ride for Recovery poker run and fundraiser event is Sept. 4 at the center, 2002 E. Robinson Ave., in Norman.

“The Survivors Clean & Sober Motorcycle Club is a brotherhood of bikers whose primary purpose is to be in the community for the brother or sister that wants to stop drinking and drugging,” said Willie “Farm Boy” Moore, a club member who helped organize the poker run. “This is a way for us to give back to the community and help pay for these children with special needs to go to camp next summer.”

Registration is $20 for a single rider and $30 for a couple, Moore said. Riders depart the center at 11 a.m. on a 75-mile route that ends where it started.

Attending the summer camp costs around $325, but scholarships are available for families that qualify.

“Get involved by coming out and supporting the run,” Moore said.

Anyone also can donate raffle items or cash.

“All of us who are involved work a 12-step program, and we are just trying to give back what we can and be productive members of the community,” he added. 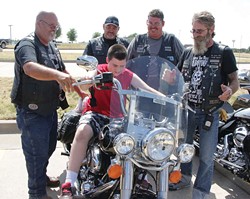 JD McCarty Center got its start in 1946 and, in the beginning, was limited to patients with cerebral palsy. Seventy years later, the center treats more than 100 different developmental disabilities.

“We are the only hospital of our kind in Oklahoma,” said Greg Gaston, JD McCarty Center director of marketing. “Last year, we saw kids from 62 of Oklahoma’s 77 counties.”

“Sammy Jack played blindside tackle at OU,” Gaston added. “When he died unexpectedly at the age of 45, a group of his former teammates started to raise money to build a cabin at the camp in his name. After that, the hospital administration decided to name the camp in his honor.”

Today, the camp is comprised of two cabins, one for boys and one for girls. It is staffed by volunteers — usually college students majoring in special or general education or recreational activities — who receive two weeks of orientation with the hospital staff.

Gaston said Camp ClapHans has a one-to-one camper-to-staff ratio, is accredited by the American Camp Association and has a nurse on-site 24 hours a day.

“We appreciate the Survivors Clean & Sober Motorcycle Club chose to honor Camp ClapHans with their support last year. We hope this partnership continues for a long time to come,” Gaston said. “While the McCarty Center is a state agency, no state dollars were used to build the camp. It was built entirely with money raised through JD McCarty Center Foundation, and camp operations are funded the same way, through donated and fundraised money. Having partnerships with groups like Survivors helps ensure the camp will continue to operate.”