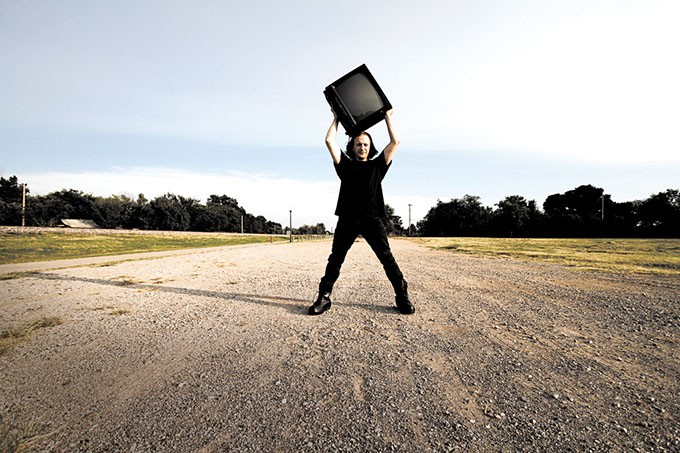 Though stylistically and tonally very different, the new movie Suedehead, directed and produced by local filmmaker Mickey Reece, finds some common ground with the 2000 blockbuster Cast Away.

Both follow men whose lives were flipped around by a single, traumatic event. Both deal with issues of isolation, loneliness and change. Both have memorable endings that let fate take over.

But while Tom Hanks and Wilson fought for survival on a desolate shore, Suedehead’s sarcastic cynic Kenny Walker, played by Mason Giles, must adjust to life fresh out of prison while stranded in the quiet halls of Northpark Mall.

Reece premieres his second film this year 8 p.m. Dec. 19 at Oklahoma Contemporary, 3000 General Pershing Blvd. His first, Me and Ichikawa, debuted May 2.

Reece said his projects are always a conceptual product of who and what is available to him at the time.

“Rather than writing a script and trying to get all the stuff to make it happen, we look at all the stuff we have and write the script around that,” Reece told Oklahoma Gazette.

For Suedehead, he took advantage of an opportunity to gain full access to Northpark Mall. From that came the idea for Kenny Walker, a former goth rocker who hopes to pick up his life where it left off after a decade in jail. In addition to getting his old band back together, Kenny also is convinced he will be able to reunite with past love Jamie (Tennille McCallister), whom he wrote to frequently without reply while behind bars.

Kenny quickly finds out his transition to life back in the real world will not be as smooth as he hoped. While moving back in with his parents, his mom (Brenda Stacy) finds a way to get her felon son a security job at Northpark alongside friendly do-right Mark (Jacob Ryan Snovel).

However, the security role is unable to subside Kenny’s inner jerk, and the character does not come across as overly grateful for his job or the mall. In reality, Reece said he could not have been more pleased with the northside mall and the building has an “historical place” in Oklahoma City.

“They were super cool. They turned off all the music for us,” he said. “We didn’t have extras; we just filmed in the mall.”

Reece said he usually tries to make his characters big and humorous. In Suedehead, however, Kenny is not the typical caricature of the sad goth audiences are accustomed to seeing, but a man with a harsh life perspective forced to face a cold reality.

“I really thought it would be funnier,” Reece said. “It actually kind of ended up being a little serious where you’re like, ‘Yeah, I’m for this, I’m going along with this goth. That’s fine.’”

Giles is playing in his first lead role as Kenny. John Selvidge, playing mysterious and shady Tommy Portokoulos, is particularly strong in his role.

Reece said he most often tries to use non-actors in his films.

“Basically, it’s just a bunch of friends, you know?” he said. “Sometimes, I’ll cast new people and they usually turn out really well.”

Reece was in the habit of making as many as three films each year, but he now wants to focus his output on quality over quantity. After just two movies this year, Reece said he hopes to spend all of 2016 on just one project.

“Doing the movies quick like that, it’s like it’s almost there like, you know, ready to swarm the film festivals, but it needs a little more time and care, I think,” he said.

If Reece has learned anything from Suedehead, it might be patience and calculation.

“Unfortunately, some of the views of Kenny Walker are also mine. So while editing this movie, I’m thinking, ‘Man, this guy is so me; I’m such an asshole,’” he said. “I really need to start being nice for a change.”

The premiere also will include free beer from Titswiggle Brewing Co. and stand-up from comedian Cameron Buchholtz.