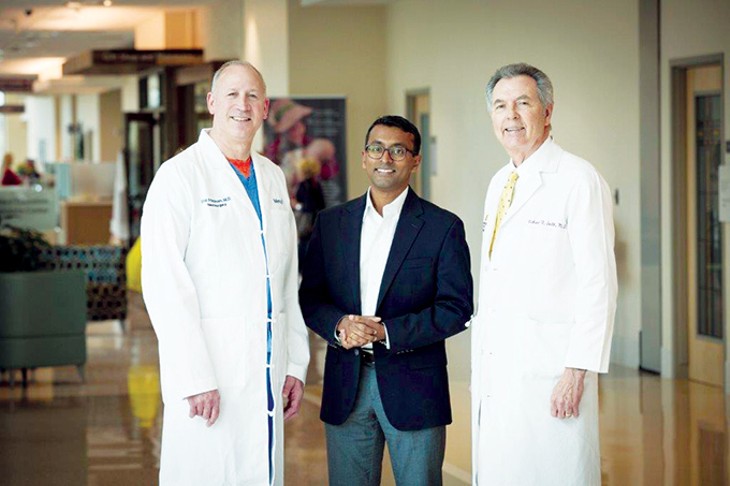 With the May opening of Herman Meinders Center for Movement Disorders at Mercy NeuroScience Institute, thousands of patients across the state and region have access to one of the most comprehensive facilities of its kind. Treating a myriad of diseases ranging from common tremors to Parkinson’s disease and dystonia, the center promises to be a beacon of hope for many afflicted individuals.

Spearheaded by Dr. Cherian Karunapuzha, the center features care and technology that was previously difficult to find in Oklahoma.

It is also home to neurosurgeon Dr. Eric Friedman and offers such treatment as deep brain stimulation (DBS), a procedure offering patients living with movement disorders a healthy and effective alternative to prescription medication.

“I remember seeing my uncle afflicted with polio when I was a child,” Karunapuzha said. “He could barely talk. He lived with his arms and legs curled up until his 80s. He was completely devastated. I wondered why we could not do anything more.”

Though several institutions attempted to offer similar programs, Karunapuzha said Mercy had the means to make it happen.

“Out of all of the other institutions in Oklahoma, Mercy was the only one build strategically and structurally for a comprehensive center,” he said. “Our neuroscience institute is set up in such a way so that we have neurosurgeons, rehabilitation and pain doctors as well as therapists all under one roof. This, in of itself, makes things easier for staff and patients alike.”

With the new center, the time and distance it might take for a patient to receive treatment is critically reduced. Before the center, many patients found themselves referred out of state or were forced to bide their time waiting for an elusive opening. Despite Oklahoma’s geographical centrality, a facility of this size was never effectively established and movement disorder treatment was a balancing act, often cascading into a logistical nightmare for patients. This was further compounded by the availability and cost of the technology needed for DBS and other procedures.

“The problem we previously faced is the same problem with any brain surgery,” Friedman said. “It’s all of the moving parts. It’s not like you just have your brain operated on and then move on. For example, if I’m going to be removing a brain tumor, I have to rely on oncologists, cancer doctors, radiation specialists and neurologists.”

"Our neuroscience institute is set up in such a way so that we have neurosurgeons, rehabilitation and pain doctors as well as therapists all under one roof."—Cherian Karunapuzha tweet this

The creation of a comprehensive program would take years without the donation of the center’s namesake, Herman Meinders. The founder of American Floral Services Inc. in 1970 and the chairman emeritus of Teleflora, one of the world’s largest floral wire services, Meinders and his wife LaDonna supported Parkinson’s disease research throughout their careers. This support became fatefully relevant when Meinders himself was diagnosed with the disease in 2014. A longtime patient of Karunapuzha, Meinders felt it was necessary to everything in his power to ensure Oklahoma retained the physician. With a $1.7 million donation, the philanthropist provided the foundation needed for opening the center.

In the same motion, Meinders exponentially grew Oklahoma’s medical status. Herman Meinders Center is not just a tremendous boon for Oklahomans, but also the patient communities in surrounding states.

“We do not want to be a flyover state when it comes to advanced medical care, especially in the field of neurology,” Karunapuzha said. “We want to be a center that can provide access to all healthcare systems, not just Mercy.”

“It’s a big population,” Friedman said, “a population that can be helped.”

Even in the opening months of the center, its prominence has already grown. In the first few days of operation, Karunapuzha and his team scheduled the number of DBS procedures many facilities take an entire year to orchestrate. Additionally, the center’s comprehensive nature allows Friedman to quickly determine the next steps for patient leading up to an operation, reducing deliberation by months.

“We are not looking to defer patients three to four months out, and as we get cranking along, I’m confident our ability to provide prompt treatment will continue to grow,” Dr. Friedman said.

The institution’s potential longevity is tethered to its stability and volume.

“Our mission requires a holistic and multidisciplinary approach,” Karunapuzha said.

Even in the center’s infancy, its future is bright.

“As we attract more patients and retain them with our comprehensive program, it becomes easier for us to enroll more complicated cases and take part in cutting-edge trials,” Karunapuzha said. “This ultimately helps the community as a whole.”