The challenge to State Question 807 will be heard by an Oklahoma Supreme Court referee this week.

Proponents for State Question 807 have filed their brief with the Oklahoma Supreme Court while the court has also denied a Tulsa attorney to submit a “friend of the court” brief and participate in the referee hearing scheduled for this week.

On Feb. 18, petitioners for SQ807 Ryan Kiesel and Michelle Tilley filed their brief in response to the challenge with the court. Challenger Paul Tay argued in his challenge that the constitution’s supremacy clause is among other grounds for dismissing the ballot petition initiative.

Lawyers for Kiesel and Tilley refer to the initiative petition for SQ807 as “IP 423” in their 16-page brief.

“Before their initiative petition has even been circulated for signatures, however, Petitioner/Protestant Paul Tay asks this Court to intervene and declare the Petition unconstitutional. He submits that IP 423 violates the Supremacy Clause of the U.S.  Constitution because its limited decriminalization, taxation, and regulation of adult-use cannabis under state law purportedly conflicts with the [Controlled Substances Act], federal racketeering laws, and unspecified federal banking laws. As explained below, Mr. Tay has not met his burden to show that IP 423 is unconstitutional — much less that it is ‘clearly and manifestly’ unconstitutional, as required for such a pre-election challenge. Proponents thus respectfully request that the Court deny Mr. Tay’s protest and permit the petition to proceed to the signature-gathering stage, so it may timely be put to a vote of the People,” according to the brief. 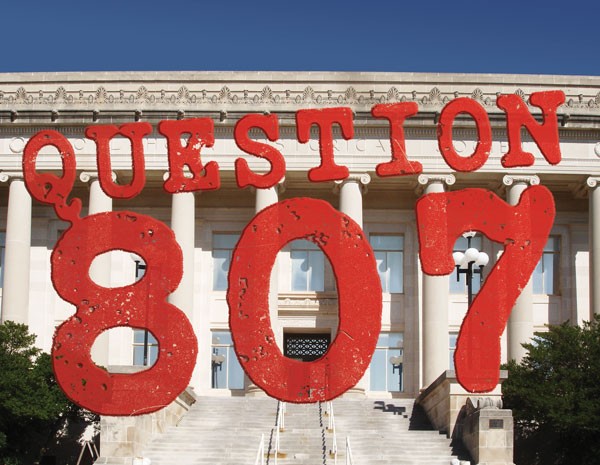 They argue that constitutional review by the court at the pre-election phase is discretionary and that Tay does not meet the legal threshold to inhibit the signature-gathering phase from proceeding.

“Protestant thus bears a heavy burden: to keep this measure from proceeding to the signature-gathering stage, he must show not just that the measure is unconstitutional, but that it is ‘clearly and manifestly unconstitutional.’ ... He has not done so here,” the brief states.

Lawyers for Kiesel and Tilley argue that the 10th Amendment to the U.S. Constitution’s “anti-commandeering doctrine” means that the ballot petition does not violate the supremacy clause and that there is case law stating that the conflicting laws between states and the federal government regarding the Controlled Substance Act, or CSA, at this stage require a “physical impossibility,” which is rare and narrowly defined.

Seven further pages are dedicated to furthering the arguments against the challenge on grounds of it violating the Controlled Substances Act.

Lawyers also argue that the SQ807 petition drive is not in conflict with federal anti-money laundering laws or banking regulations.

In its conclusion, the brief also challenges Tay’s standing.

“This is a pre-election challenge to an initiative that has not yet even been put to a vote of the People, much less become law. ... Furthermore, it comes to the Court as an original action, with the attendant space limitations and abbreviated briefing schedule, and without having had an opportunity to develop the record or arguments before the trial court; it is also brought by a pro se Protestant who cites almost no legal authority, who may or may not have standing to assert the claims at issue in the first instance, and who has himself filed a competing initiative that implicates a number of the same issues. These inherent limitations along with the deference given to ‘the fundamental and precious right of initiative petition,’ … are why this Court has ‘limited such pre-election review to clear or manifest facial constitutional infirmities.’ … There are certainly no such infirmities here. Finally, although the scope of Mr. Tay’s challenge is not entirely clear, it appears that at least some of his objections involve only certain portions of the Petition, such as the taxing clause. But IP 423 also contains a severance clause, allowing any part deemed unconstitutional to be severed without invalidating the whole. To the extent Mr. Tay’s challenge does not affect the entirety of the Petition, then, it does not present a reason to withhold the Petition from the voters,” the brief states.

Tulsa attorney Ron Durbin has met with Paul Tay and on Feb. 19 petitioned the court to participate in the referee hearing and oral argument scheduled for Feb. 26. He also applied to file an amicus curiae, or “friend of the court” brief, in support of Tay.

Durbin sought leave with the court because Tay is incarcerated in the Tulsa County jail and does not have access to legal resources, represents “hundreds of Oklahoma medical marijuana businesses and patients licensed” who would be affected by SQ807 and because he believes the court’s review of the matter would be aided by additional legal briefs.

Kiesel and Tilley objected to that for several reasons. For one, the briefing period was over and the court was expected to hold a referee hearing less than a week later. The objection also points out that Durbin would “raise at least two entirely new challenges.”

Also, “A delay is particularly problematic here, in a case involving an initiative petition, where time is of the essence. Although it may appear that there is ample time between now and the November general election, there are still numerous time-consuming steps in the lengthy initiative process — including signature collection, signature counting, a second protest period, and resolution of the ballot title — that must all be completed before the August deadline for printing general election ballots,” according to the filing.