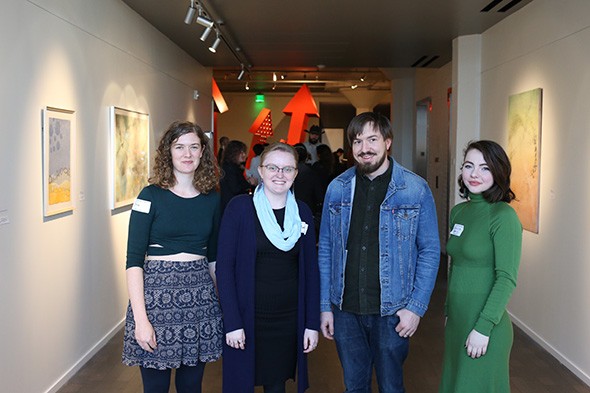 “We have the emerging artists who participate,” Brewer said. “We have the emerging curator that’s learning how to curate, and then also, for a lot of people, it’s the first time ever going to an art exhibition because it’s also a party. … It really appeals to young people that maybe don’t feel comfortable going to a typical white cube gallery. This is different. … We have people that start buying their art collections at Momentum, too, so it’s cultivating artists, art supporters, art buyers, curators, all of that in one.”

“We start by picking a regional curator that we think is doing really interesting work and would be interested in doing a nontraditional art exhibition,” Brewer said. “Then from a pool of applicants, that curator selects the emerging curator, and from there, the two of them work together to select the three spotlight artists and the [other artists.] … They also work together to lay out the exhibition, where all the pieces are going to go, and they spend time one-on-one with the spotlight artists to help them work through their projects, answer any questions that they have, help guide them in their thoughts if they have any problems along the way, help problem solve.”

In a joint curatorial statement, Powers and Moody wrote that their “goal throughout this curatorial process has purely been to present a diverse and engaging show full of different artistic media.”

“Many of the statements presented within these works are those of self-expression, reflection and inner dialogue,” Powers and Moody wrote. “Every piece is one that viewers can easily lose themselves in. … Walking from piece to piece is like walking from environment to environment. … This exhibition reminds us that you and the environments you create are important and appreciated.”

The first step for attracting a diverse pool of artist applicants, Brewer said, is to select diverse curators. True to its name, Momentum can help boost an emerging artist’s career.

“We want everyone to feel welcome and comfortable submitting to be a part of Momentum,” Brewer said. “A lot of the artists when they first start applying to Momentum, that’s the first exhibition that they’ve been in before. With Momentum, we offer a free workshop on how to prepare your work to be installed, so there’s a learning component to it as well. And once they’ve participated in Momentum once or several times, they have more experience and people start to see their work. … People have gotten exhibitions directly from their work being seen in Momentum. … People will come to see who was selected and who keeps getting selected year after year.”

In addition to curatorial direction, the exhibition’s three spotlight artists receive a $1,000 honorarium to help them create new works.

Spotlight artist Daniel Giles Helm creates experimental pieces utilizing emerging technology. For Momentum, Helm is using artificial intelligence software to create a portrait of Oklahoma through a “really strange lens,” examining “the people that have been in power and who are potentially going to be coming into power in our state.”

“I worked with an archivist at University of Oklahoma to amass, I don’t remember the exact number, but a couple thousand political TV ads from the state going all the way back to the ’60s,” Helm said. “And then I’ve written software to basically transcribe what they say and generate its own political ads and stitch them together using their political ads. … Really it’s just kind of an onslaught of the kind of catch phrases and clichés and stereotypes that you get out of political advertisements across 60 years.”

“We want everyone to feel welcome
and comfortable submitting,
to be a part of Momentum.”
—Krystle Brewer tweet this

Helm also used artificial intelligence to create images of new “leaders, movers and shakers of the future” from photos of winners of Oklahoma’s NextGen Under 30 award.

“Basically, I’m thinking about who gives these awards and why they give these awards and the recipients of these awards,” Helm said. “But the actual thing that you’ll be seeing in the gallery space is some animations that I made … using that technology to generate the closest thing I can to the actual images of these people. I’m generating really similar images to images that these people post on social media, that their company posts on their website or whatever else, and then using that software to create transitions between them from face to face to face. Sometimes those are flattering portrayals, and some of them are kind of strange and grotesque.”

Spotlight artist Emma Difani uses printmaking techniques as a drawing tool to create layers of “endless repetition and variation” inspired by the places natural and urban environments intersect and overlap. Difani’s Momentum piece is “a miniature screen-printed fabric forest” of recycled scraps sewn together to create a “substrate for screenprints and wood cuts” on 8-foot-tall panels that form “a little room, essentially, within the larger space.”

Difani first became interested in these spaces-within-spaces after moving to Oklahoma City from New Mexico.

“I grew up like living five minutes from the river and forest and 20 minutes from the mountains and all these things,” Difani said. “That kind of changed when I moved to Oklahoma City. … I had to get much more intentional about how I sought out those natural spaces within that urban environment. … The first year and a half I was living in Oklahoma City, I didn’t have a car, so I had to walk or bike everywhere. It was definitely a challenge. Oklahoma City is not a super bike- or walk-friendly place. Even downtown it’s a little bit of a struggle. … Luckily, I work and live like within a mile so I can walk or bike, and even just that 10 minutes a day is a kind of nice. I stop and have a refreshing moment of, like, ‘Look at those crazy plants that are just finding a crack in the sidewalk and are like, “I’m going to live here.”’”

“I really love working in kind of communal spaces like that because you just get to learn from and react to what other artists are making,” Difani said. “I’ve learned a lot of things from the other artists who are there teaching, and then, coming up with new interesting things to teach … prompts you to explore a little bit more.”

In addition to nearly 100 works of art, Momentum also features live music and dance, drag and aerial performances. Brewer said that after nearly two decades, it remains an event intentionally unlike a typical art show.

“One thing that hasn’t changed about Momentum, that we’ve tried very hard to keep, is the edginess or the grit,” Brewer said. “It’s always in these unexpected locations. … It’s an experience. It’s there for the weekend, and then it’s gone.”

Tickets to Friday and Saturday’s shows are $10-$15. Admission on Sunday is free. Following Momentum, the artists’ works will be on display at Modella Art Gallery in Stillwater May 7-June 6. Visit ovac-ok.org.