“We have a lot of different options now,” she said. “We’ve always held down the classical fort. We still feel really solid about our mission.” 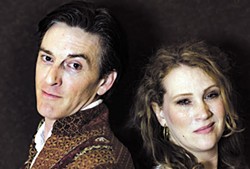 Much Ado About Nothing opens this year’s Oklahoma Shakespeare in the Park season June 2 on the Water Stage at Myriad Botanical Gardens, 301 W. Reno Ave.

The theater company bills the show as “the original rom-com.”

The Much Ado formula — two lovers who act like they hate each other as their continued bickering only builds upon their attraction — is one that can be found again and again in popular culture, said Kathryn McGill, Oklahoma Shakespeare in the Park (OSP) executive and artistic director.

The two leads feature Wil Rogers as Benedick and Renee Krapff as Beatrice.

Rogers and Krapff are veteran OSP company members and can be seen in a number of other theaters around the state. Rogers played Antony in last year’s production of Julius Caesar, and Krapff was Paulina in The Winter’s Tale.

Howard Barker’s Scenes from an Execution is next, beginning its indoor theater run July 7 at 2920 Paseo St., OSP’s headquarters. It tells the story of a female Venetian artist commissioned to paint a mural celebrating a military victory that, in reality, was quite catastrophic for both sides.

In a world where Internet acronyms and emojis constitute conversation and political dialogue is replaced with insults, McGill said offering an outlet that promotes the complex language often found in classic plays has become a necessity.

“We find it really important today because people are taking language and reducing it like with texting and Twitter and all of that,” she said. “It’s reduction of language whereas most classic plays are about the expansion of language.”

It’s a mission that has driven McGill and OSP for more than 30 years.

When McGill founded OSP in 1985, there were few theater options in Oklahoma City outside of Lyric Theatre of Oklahoma or Jewel Box Theatre.

McGill, who earned a degree from New York University and missed catching the Shakespeare productions in Central Park, wanted to change that.

OSP launched its first season at Edmond’s Hafer Park, where it remained for almost 20 years. Eventually, the company was invited to Oklahoma City and perform outdoors on the Water Stage, where it has remained for the last 12 years.

The move has made the company much more visible, McGill said. OSP participates in the district’s First Friday Gallery Art Walk event and receives far more regular foot traffic through its headquarters inside.

An additional benefit to the move is an indoor theater space that adjoins the lobby. Though McGill started with the vision to put on outdoor shows exclusively, that can be a tough reality in Oklahoma summers.

“We can’t do everything outdoors,” she said. “It’s hot. You’ve got to have another space.”

In the time since OSP began, McGill said local interest in theater has increased. With that has also come an increase in new area theaters.

“We have a lot of different options now,” she said. “We’ve always held down the classical fort. We still feel really solid about our mission.”

The long-range goal for OSP is to establish a 300-seat Paseo theater space at The Paseo Plunge, 3010 Paseo St., across from Picasso Cafe. McGill said OSP would share the venue with the community and other theater companies. However, today’s financial climate makes that goal seem far off.

With the flopping oil industry and money-strapped state government, McGill said the theater community was prospering but is now forced to hold back.

“No theater relies on ticket sales because we’d have to be charging $100 a ticket to survive,” she said. “We rely on foundations and corporations to sustain us, cover the other part of the ticket cost that we don’t want to give to the patrons.”

While McGill doesn’t expect this to be OSP’s best financial season, she said the theater has faced other economic slumps in the past.

“Times like this are a challenge, but we’ve had a lot of good years,” she said. “We’re a theater that has always been able to adapt to challenges. We’ll get through this and move on.”

Print Headline; Original rom-com, Much Ado About Nothing kicks off Oklahoma Shakespeare in the Park’s season.

Much Ado About Nothing