Science Museum Oklahoma is looking to get a little bloody and boozy for one night only as they welcome adult true crime buffs to put their knowledge to the test as they try to solve a crime during True Crime: Blood, Bones and Booze.

“We found that adults like to play just as much as kids do, even more so if you include a little alcohol in the mix,” said Greg Miller, director of education at the museum.

“But really, it’s just a time when people can get together, have a little party, a fun evening alone without their kids and without kids in the building at all. You can delve into some of the aspects of forensic science and criminology that are probably a little bit too dark to handle with kids,” he said.

Part of the Museum’s adults-only after-hours program, SMO21, the idea was inspired by a current Sherlock Holmes exhibit featured at the museum. For the evening, guests will become detectives tasked with finding clues to crack the case. Staff will be on hand to help throughout the night as guests work to examine blood splatter, examine fingerprints and utilize other forensic science tactics to catch the perpetrator.

“It is 21 and up to get in,” said Linda Maisch, the museum’s vice president of community engagement. “When you get here, the nice thing about it is it is $21 to enter and then it’s cash bar. That $21 includes all of the activities for the evening.”

“It’s great for adults. We see a lot of it, it’s a perfect date night. We see a lot of people just buy individual tickets and get their group together and come out for a girl’s night, a guy’s night, just a group of friends getting together for the evening,” she said. 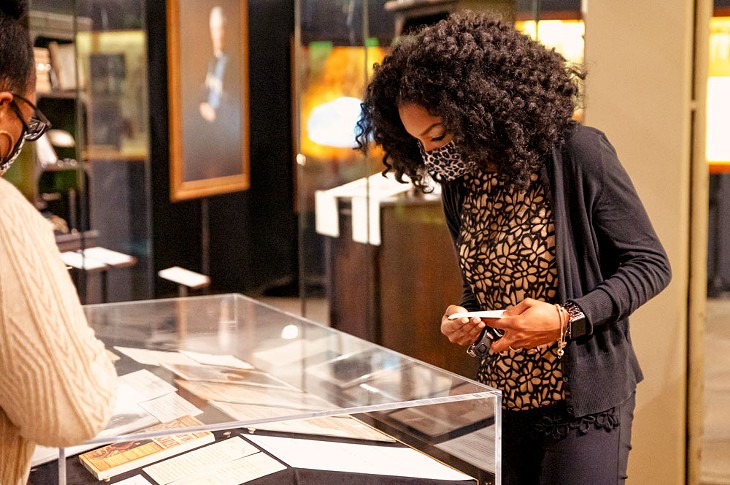 “The neat thing about this one is the VIP admission and that actually gets you in 30 minutes early, it gets you a signature cocktail and it gets you access to the Sherlock Holmes, the exhibition,” she said. “That VIP option, this is the first time we’ve ever done it before and that’s a really cool option.”

Maisch said tickets tend to go quickly for the adult-only event and their last event, the first since the COVID-19 pandemic shutdown, brought in 650 people to the museum.

“There’s plenty of room to spread out, it’s not crowded. Everyone had a good time,” Maisch said.

The previous SMO21 event was based on an exhibit featured at the museum through Sept. 6, The Worst-Case Scenario Survival Experience, which will be accessible with both admission tiers during the True Crime event.

Miller said the event is based on the popular 1999 book, “The Worst-Case Scenario Handbook,” written by Joshua Piven and David Borgenicht.

“It had a whole bunch of stories, and expert opinions on how to do things like survive a crocodile attack. It wasn’t a funny story, it was told in a funny way, but it was real experts telling you how to really do the things, the exhibit just reflects that pretty much,” Miller said. “So, it’s got stuff about how to jump from a train car and how to survive all sorts of animal attacks, how to survive quicksand and avalanches and how to break into a lock if you need to. All sorts of good stuff like that.”

Maisch said the exhibit is very hands-on, including a lockpicking wall and a giant ball pit used to show how to escape from quicksand. From the practical to the absurd, the museum has taken the scenarios from the book and put them into action.

“One of the things in Worst Case Scenario is how to escape clowns and they had our mirror maze and clowns hiding in the mirror maze. It was fantastic,” Maisch said. “It is definitely not something that you would see every day.”

To purchase tickets or to find out more information about the museum’s current and upcoming events, visit www.sciencemuseumok.org/smo21.