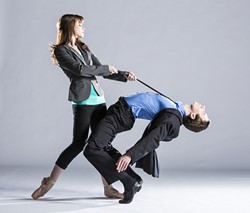 “A comment that comes up with people is, ‘I don’t know much about ballet, so will I like it?’” Mills said. “Regardless of what we’re doing, you don’t have to know anything.”

Aside from the musical appeal of Frank Sinatra, Patsy Cline and electronic musician Moby, each show meets the audience on street level and in everyday clothes.

Mills focused on popular music progression, choreographic diversity and costuming appeal when putting together the program.

Including two Oklahoma premiers, Nine Sinatra Songs and Dear Miss Cline, the bill ends with a cinematic techno-styled performance of Play, each piece seeking to integrate popular music of various eras into an accessible work with wide appeal.

“I thought it would be really great to put together three ballets that use very familiar music to show people that it can be relevant, it can be current,” Mills said.

In Play, male characters don suits and ties and the women are dressed as if they’re walking down the street. Wardrobe choices are similar in Cline. Appropriately, the costumes for Nine Sinatra Songs — designed for the premier by Oscar de la Renta — put performers in tuxedos and women in gowns.

“You could put the dancers in any beautiful gala and no one would think any different,” Mills said. 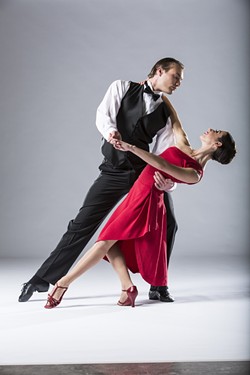 Nine Sinatra Songs was choreographed for its 1982 premier by New York writer, choreographer and dancer Twyla Tharp and presents seven couples in a spectrum of romantic interactions. Dance styles include swing, tango and cha-cha.

“I wanted to do an entire evening with works that used popular music,” Mills said. “To my knowledge, that hasn’t been done by a classical ballet company.”'