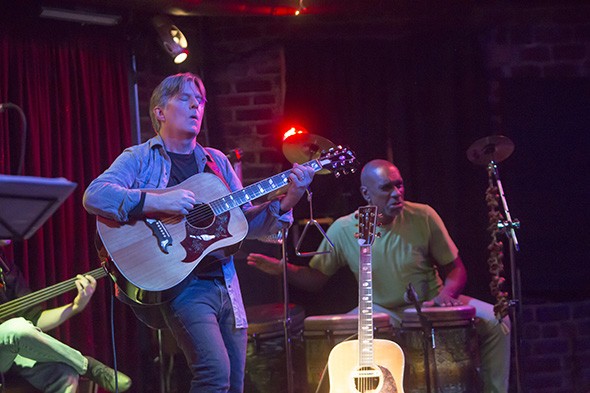 Music has the power to inspire, shape careers and take listeners on journeys, as is the case for New Horizons Ensemble, a six-person contemporary acoustic group coming to Oklahoma City Community College (OCCC) Jan. 31.

New Horizons emerged after Mosby recorded his first album with producer Will Ackerman, which brought him into contact with people he had met in St. Louis, Missouri, where he is based, including former classmates.

“It turns out that all the people that were on [the album] were also available for touring as well,” Mosby said. “They believed in the music. All the players are top-flight.”

Mosby has been on his own musical journey since he was a child. His musical beginnings started around age 6 and were informed by curiosity and a desire to learn new instruments.

“I came up in the era when musicals were still on television, so I started by listening to Broadway musicals early on,” Mosby said. “When I heard The Beatles, I got a guitar, did that route, then later I heard Herb Alpert and the Tijuana brass when I was 13, and I started playing trumpet.”

By 14, Mosby had switched back to guitar and began playing in acoustic string bands while he was still in high school. He also credits Will the Circle Be Unbroken, a 1972 album by the Nitty Gritty Dirt Band, as opening up the world of bluegrass and musical improvisation — style that would continue to shape Mosby’s musical stylings during the 1970s and beyond.

His path would eventually take him to study at Berklee College of Music and win two Global Music Awards (GMAs) in 2016 for his album On Eagle Mountain. In addition to his Western musical stylings, Mosby is also interested in Eastern music and is a member of Imdad Khani Gharana, a sitar-based musical tradition that dates back to the early part of the 20th century.

Because he works with so many different types of music, Mosby said his composition process varies greatly. He previously composed music for film, theater and television but said ideas can also come more organically, stemming from practice sessions and developing ideas.

When he works on cerebral composing — without instruments — Mosby said the music score becomes like a canvas on which to splash sound and visualize ideas. In contrast, when he’s working with an instrument, the process of composition functions at a tactile level.

“There’s another process where I’m actually on the instrument, molding sound like a sculptor molds clay,” he said. “You’re working with sound in real time, in your hands, and that directs a different sort of compositional process.”

Mosby described the process as being similar to impressionism, in the tradition of Claude Debussy — one of his major musical influences — fundamentally based on rich harmonies and strong melodies.

“You get a cool-sounding chord or you get a cool melody … and then you start harmonizing it, breaking it apart like that to really crack open the nut,” Mosby said of his compositional process.

By focusing in on one element of sound like a chord progression or melody, Mosby aims to see what he can do with it and how far he can develop the music.

“If I’m dealing with Eastern music, it starts a lot with melody first, and then chords on top of that,” he said. “Each process has its own kind of pathway in. Sometimes you just sit and around and play and come up with something.”

These layered processes of composition manifest in New Horizons Ensemble’s performances, all of which are meant to take the audience on a musical journey, replete with moments of auditory magic.

“What I look for is an engaging performance that will actually take the listener from point A to point B,” Mosby said.

But this journey from A to B is anything but static or rigidly linear. Mosby compared a concert to a road trip wherein the fastest and most efficient route is not always the most scenic.

New Horizons Ensemble’s performances are like musical meanderings, like those road trips where the goal is to experience as much beauty off the beaten track as it is to arrive.

“It’s like a person on a bus,” Mosby said. “You can take the straight routes in, or you can take the side roads, check out the really interesting sights. Then you come back down before you hit your main destination.”

In order to meet the high bars that the ensemble sets for itself, Mosby said the performances are stacked so that each tune has its own definitive moment and each moment has its place in the set.

Mosby said audience members have come up to him after a concert and told him the music helped create some sort of musical insight, whether they were having difficulty at work or struggling to solve a problem.

“By the end … they are totally transformed,” Mosby said. “Because each tune has its own special place inside the set, I create an arc of music through which the listener can just travel.”

Inspired by a vast array of instrumentation and musical styles, New Horizons Ensemble intends to do the same for its audiences by offering up the kind of moments of insightful transformation that can only come during the enchantment of a live performance.

For Mosby, this kind of performance is the true mark to which musicians should aspire, which he views as a lost art form. Another way the ensemble reaches out musically is through various workshops and private lessons.

“We all do outreach at all levels,” Mosby said. “We all come at it with a pretty broad spectrum.”