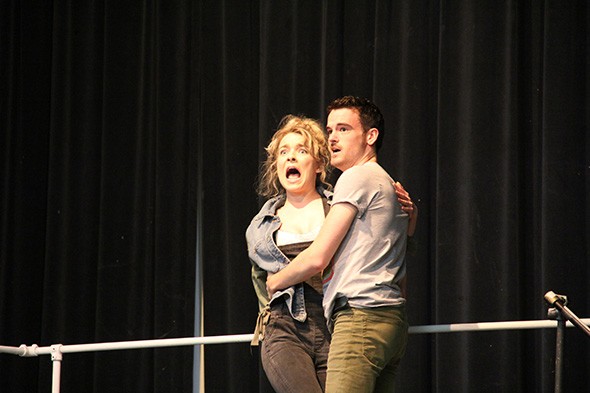 Guthrie’s Pollard Theatre Company is following its production of Beehive: The ’60s Musical by leaping ahead a decade to ensure the 2018-2019 season ends in Disaster! While both productions are called “jukebox musicals” because their scores consist of popular songs, Disaster!, written by Seth Rudetsky and Jack Plotnick, is a larger production. The show runs June 7-29 at Pollard Theatre, 120 W. Harrison Ave, in Guthrie. Tickets are $15-$30.

“Beehive is really a revue,” said Pollard artistic director W. Jerome Stevenson. “It’s a series of songs with a narrator kind of tying the show together and guiding you through the era. Disaster! is an actual book musical, but it’s very unique in that it’s not original songs for the show. What they’ve done is they’ve taken a comedy that spoofs disaster films from the ’70s and they decided for the score, they would use music from the era, and then, which I thought was kind of a stroke of genius, they said, ‘You know what we should do instead of just putting a random song here? We should allow all of those ’70s hits to somehow advance the plot.’ So part of the joke becomes, ‘How are they going to use this song in their story?’ ... And it’s everything from ‘Hot Stuff’ to ‘25 or 6 to 4’ to ‘When Will I Be Loved.’ It’s all a big, silly joke. … You just find yourself waiting for them to get the next song in or for the next death to take place, and even those are kind of like, ‘Oh, for the love of God.’”

Though the subject matter is silly, Matthew Sipress, the musical’s director, said he wants the actors to deliver their lines with a straight face.

“I think the best comedy works is if everyone plays it like it’s totally serious,” Sipress said. “Is it funny to the audience? Absolutely, but for these people, these are real problems.”

As a child born in 1971, Sipress said he was not laughing at the kind of onscreen disasters depicted in films such as Airport 1975, the film that served as a primary inspiration for the classic spoof Airplane!

“I wasn’t actually going to the theater to see Karen Black land that airplane, but I can appreciate it,” Sipress said. “I was going to the movie theater to see Superman, which I guess is pretty close to a disaster film. I had to be removed from the theater when I freaked out when Lois Lane got her car eaten by the earthquake and dirt was falling in her mouth and I completely fell apart.”

Though Disaster! includes an earthquake as well as a fire, man-eating rats and piranhas, a capsized ship and more, Stevenson said the musical’s threats are “so innocuous and kind of PG-13” that children will enjoy it, too.

I think the best comedy works is if everyone plays it like it's totally serious.Matthew Sipress tweet this

“It is a big, broad, silly, campy musical, and so one of the challenges becomes, ‘How do you do this idea of The Poseidon Adventure and The Towering Inferno and Jaws and Piranha without it becoming frightening and still guarantee the laughs?’” Stevenson said. “Every joke, every disaster element, we had to figure out a way to do it so that the audience knew what was happening but that it was a funny way in which we did that, so when parts of the ship collapse or the boat capsizes or there’s a tidal wave or the piranhas get loose, it had to be still funny and inherently jovial and not, ‘Oh my god! That piranha’s going to eat that guy! And that’s not funny.’ That was really the challenge, ‘How do you maintain the tone of the piece and still spoof all these really serious things?’ because, of course, the tone of those films from the ’70s was serious. The Towering Inferno was a fire, and The Poseidon Adventure, the ship’s underwater, and all of that stuff was horrific with the right tone; but the minute you camp it up and have a fun time with it, it makes people laugh. That’s the goal with this piece, to make sure that the audience enjoys the music and is vibing to the music but also laughs real hard.”

Another challenge, of course, is creating an effects-heavy period piece on a small stage and budget.

“The element that you kind of focus on is making sure that you can evoke the quality of the ’70s on a budget,” Stevenson said, “because with so much of that stuff, you could take it to the extreme and build everything from scratch and make it all original fabrics, and all that stuff becomes costly, and it doesn’t necessarily lend you more funny.”

So how do you depict a boat capsizing onstage without spending a lot of money? Sipress refuses to tell.

Though the musical contains very specific sendups of ’70s disaster film tropes and characters, Sipress said most of the humor is broad enough to appeal to people who are not aware of the movies.

“There’s two characters in the show which are essentially Shelley Winters and the other guy [Jack Albertson] from Poseidon Adventure,” Sipress said. “I don’t know if people are going to get that joke, but … you don’t have to get every reference at all because it gets to a point of ridiculousness by the end.”

“We were able to assemble this cast that we just couldn’t imagine being able to get together in one show,” Stevenson said. “Every time we made a call, they went, ‘Yeah, I’d love to do it. … Sign me up. It’s hysterical.’”

Sipress said a cohesive cast is essential to the comedy’s success.

“The show has to be played at a certain level, and we all need to make sure that we’re all in the same play together so that we’re not playing three different kinds of comedy,” Sipress said. “I think we’re all, literally, in the same boat, and we’ve all got to stay in that same high-stakes place so that, as it gets more and more ridiculous, the audience just comes along with us.”