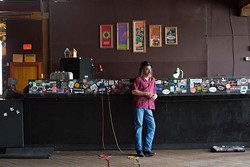 “Honey, don’t you be yelling at me when I’m cleaning my gun / I’ll wash the blood off the tailgate when deer season’s done.”

He’s the kind of songwriter who makes other songwriters speak of him as if he’s a rare breed. Critics love him, too. CNN called him “America’s fiercest songwriter,” an evocative accolade, for sure.

The 53-year-old has produced a remarkable corpus of Americana, roots, and rock ’n’ roll, but it has become difficult to describe someone who opens a new project with something as genuinely funny as “Copper Canteen” and closes with the profoundly haunting “Cutter.”

The praise and critical acclaim started in 1987 at Kerrville Folk Festival in Kerrville, Texas. The event always focused on songwriting, and previous competition winners include Lyle Lovett, Robert Earl Keen and Steve Earle. In 1987, McMurtry joined those distinguished alumni, which have created some of the most respected and well-received works in Americana, folk, roots and bluegrass.

McMurtry’s storytelling ability was nurtured from a young age. His mother was an English educator and his father, author Larry McMurtry, won the 1986 Pulitzer Prize for fiction for his novel Lonesome Dove.

“My father had books like wallpaper,” McMurtry said during a recent Oklahoma Gazette interview. “They were stacked everywhere. He was a collector, and he had a rare book shop for 30 years.”

The boy liked music, so his mom taught him to play guitar.

“I wanted to be Johnny Cash,” he said.

He started by playing obscure covers of songs he liked but soon discovered he needed to learn popular music, too, so he could get gigs.

“I learned Jimmy Buffett so the food and beverage guy could recognize the music and hire me,” he said.

Then, that folk festival happened.

“Kerrville really kicked off my writing,” he said. “I worked from a scrap pile, even then. I jot things down and then keep coming back to it to see if it makes sense.”

Love, resentment, commitment and confusion dance together throughout his songs. Its darkest iteration has to be “Cutter.” The music itself is heavy and brooding, and its lyrics are simple, disturbing and effective: “I cut myself sharp and deep / It’s the only thing that let’s me sleep / Takes the pain from off my face / And puts it in one tiny space.”

The tableau comes from the soul of a middle-aged man, one who fully understands how complicated living and loving can be. Humor leavens the darkness with hope and acceptance on Complicated Game.