Americans have a habit — perhaps all nations of the world do — of generalizing entire cultures using simplified stereotypes.

Pat Buranasombati said Japan experiences culture condensing. While visiting his brother in Oklahoma City, he found that Japanese restaurants here are “all the same.”

Sushi and teppanyaki might be ubiquitous, but there’s also a dearth of other Japanese options. Indeed, Tamashii Ramen House and upcoming Gor? Ramen + Izakaya serve ramen, but none offer shabu-shabu.

Previously, the closest place to find shabu-shabu was in Stillwater.

The 31-seat restaurant mimics the plentiful shabu-shabu restaurants he visited when he lived in Los Angeles. A long, U-shaped bar holds bowls for broth. Behind the counter, electric cooktops are flipped on, bringing the vegetarian liquid to a boil.

It’s a simple and healthy cuisine, he said, but it’s also an entertaining way to dine.

Unlike some other foods, shabu-shabu benefits from a primer. While the staff is always happy to answer questions, Buranasombati also directs diners to the restaurant’s Facebook page, where they can view a how-to video.

“At first, I thought a 28-piece meal would be a funny thing,” Buranasombati said. “But every day, people come in and order it. I’m amazed.”

Oklahomans’ hunger for steak can’t be overestimated. Regardless of what customers order, though, Buranasombati said he doesn’t want anyone to leave hungry. There are always free refills on rice. He knows students are on a budget, so he aims to keep his prices low and options plentiful.

Along with rib-eye, the menu includes the more affordable eye round steak. And while beef and pork are the traditional shabu-shabu meats, he added shrimp, scallops and chicken to the selection.

For those who don’t want meat, the restaurant’s setup gives every seat its own bowl for broth. People keeping vegetarian or vegan can avoid getting any meat or meat by-products in their meals. Those with shellfish allergies can avoid cross-contaminating with shrimp and scallops.

Even chili-heads, always searching for a better burn, can load up the broth with tons of heat without forcing their companions to endure a scorched tongue.

It’s also a good option for a social meal or a solitary one. The open space is ideal for conversations, especially at the corners, but the arrangement also makes it easy for customers to come in on their own for a quick bite. 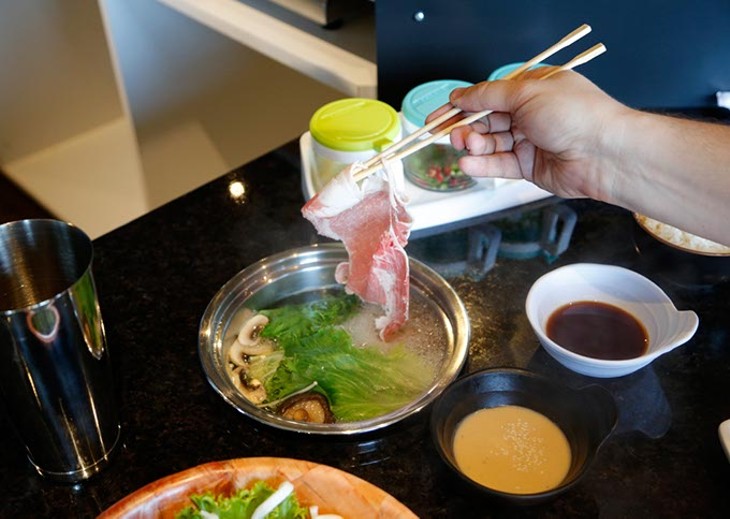 One of the tastiest additions on the menu is beaten egg for $1 more. Dipping the freshly cooked meat in the egg wash is a good way to add a fuller flavor and feel to each bite. Afterward, it can be added to the broth, almost like an egg drop soup.

Though it might seem like quite a production, Muu Shabu accommodates a number of University of Central Oklahoma staff and educators on a tight schedule.

“It can be 15 minutes, or you can take two hours,” he said. “It depends on the time you have to enjoy your meal. And it depends on how fast they can eat.”

The vegetable broth is cooked daily, and once the menu is more established, Buranasombati said he plans to add sukiyaki broth to the lineup, which is a darker, sweeter broth, as well as appetizers and desserts.

He’s also hoping to get a liquor license, at which point the restaurant will extend its current hours — 11 a.m.-9:30 p.m. daily — for the late-night crowd. But getting more people in might not be a problem. After only a few weeks in business, Buranasombati said, Muu Shabu already has regulars. They visit from Norman, Yukon and Mustang.

“People have come from all over the place. And they come back,” he said.

Oklahomans are willing to learn and try something new, Buranasombati said.

“That’s what I really want: for people to open up and have a new experience,” he said.