Snack Attack opened its doors last April to a new audience in Yukon, but it’s carrying on the tradition of made-from-scratch ice cream, fresh salads, nachos and tamales started at Refresquierias Las Delicias almost 10 years ago.

Husband-and-wife co-owners Blanca and Adan Campos live in Yukon but have operated the south side Las Delicias, 1107 SW 59th St., for more than a decade, building on the tradition of neverias that serve fresh ice cream, fruit and indulgent treats.

Blanca Campos oversees the Yukon location while her husband runs Las Delicias. She said they made a concerted effort to attract more non-Latino customers at their new store, and they felt the 336 S. Mustang Road location near two schools and a large office complex was the perfect place to unveil the new store.

Outside Roxy’s Ice Cream Social locations, there aren’t many places in the Oklahoma City metro offering large selections of housemade ice cream like the neverias, which are largely concentrated in southwest Oklahoma City.

Snack Attack and Las Delicias both offer 20 flavors of ice cream, and Campos said strawberry cheesecake, Oreo and butter pecan flavors are the top sellers. Oreo and chocolate chip cookie include huge pieces of mix-ins and are indicative of the product available year-round.

‘There’s no crumbs,” Campos said of the mix-ins. “Sometimes [with mass produced products], it feels like they’re giving you leftovers.”

Even on an overcast morning during the week with temperatures hovering around freezing, Campos was entertaining a steady stream of customers ordering both lunch and indulgent treats.

“Believe it or not, we never stop making ice cream, even when it’s cold,” Campos said. “We make multiple batches throughout the week. Some are more popular than others, but ice cream is a year-round thing for us.”

It is a 30-40-minute process to make the ice cream in an electric mixer on-site, Campos said. The base ice cream flavor is made, and then mix-ins like fresh pineapple in a piña colada or pecans in the pecan pie flavor are added.

Sweet treats aren’t limited to ice cream at Snack Attack, where fresh fruit is covered in lime juice and Mexican spices. It also offers a variety of sweet and savory crêpes, brownies, churros, chocolate-dipped fruit and a dish called The Crazy Apple that is covered in sweet and spicy chamoy seasoning, lime juice, peanuts and a choice of additional fruit like mango and pineapple. 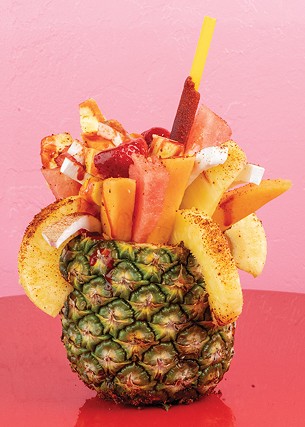 Traditional aguas frescas are marketed at the store as fruit waters. They are made without powders or concentrates by infusing real fruit. There are more than 20 flavors of fruit water, including horchata, which is sold as “rice water” because it’s made from scratch.

After some work, the section has become one of the store’s most popular.

“It was hard to convince people not to get soda, so I started offering the fruit water with the meal so people got to try them,” Campos said.  “I’m practically exposing them. Now when people come in for their food, they come in straight to the fruit water.”

Snack Attack is much more than just a place for a dessert. It offers healthy, made-from-scratch dishes like chicken wraps and fun takes on nachos that can be made with flavored Doritos and topped with a variety of meats, avocado, tomato and sauces. Chicken and shredded beef is made at the store, and there is no fryer on the premises.

“We started tamales at the Las Delicias, and we only had them for the holidays, but people liked them so much that we do them all year round,” Campos said. “My mom makes them, and she’s pretty busy. People get a dozen on their way home from work and don’t have to worry about dinner.”

Street corn or elotes are popular, Campos said. They offer multiple takes on the now-ubiquitous dish that includes a Dorielote — a combination of Doritos nachos and a corn mixture with melted cheese and spices.

Snack Attack also serves loaded baked potatoes, and its recent addition of a baked potato soup with bacon has been so popular that Campos said what was once going to be a seasonal offering likely will be offered all year.

Campos said business has slowly but surely picked up at the new location.

“More people are coming in, and they really like it,” she said. “They’re excited because there is something different, and they’re tired of the same old thing.”