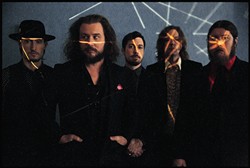 My Morning Jacket has Rosie to thank for helping it survive the long nights.

Rosie, a two-toned ’89 Dodge van, was the alt-country band’s first tour vessel. She was named for the classic AC/DC song “Whole Lotta Rosie.”

“It looked like a shit sandwich because it was poop brown on the top and bottom and cream in the middle,” said Tom Blankenship, bassist for the Louisville, Kentucky, group.

Blankenship spoke with Oklahoma Gazette before the act’s April 27 show at The Criterion, 500 E. Sheridan Ave. It will be the first time My Morning Jacket has played in Oklahoma City, he said.

The act now travels in a cushy tour bus, but in the early years, bandmates pulled Rosie into shady truck stops on late nights and tried to sleep across her benches.

“One guy would wake up every couple of hours and turn on the van to make sure everybody stayed warm,” Blankenship recalled.

My Morning Jacket has consistently churned out high-quality records in its 17-year run. Blankenship is the only remaining member of the band’s original lineup aside from charismatic founder, vocalist and guitarist Jim James. In his time, the bassist has seen the group upgrade its travel arrangements and musically morph along with the tastes and attitudes of its members.

While My Morning Jacket’s discography might be of consistent quality, no one release can be called a close clone of another. The band always finds new angles with which to approach music, in some instances making marked sonic leaps between records.

Blankenship would often stop with his bandmates in Oklahoma City for a quick bite to eat en route to concerts in Austin or New Orleans. He can remember playing a 2011 concert in Tulsa, but for one reason or another, a show in the state’s capital city has eluded the act until now.

“I’m excited to be there and explore the city a little bit,” he said.

The musician has nearly spent his entire adult life as a member of My Morning Jacket, which also means he has been forced to spend much of that time on the road between tour stops. He said no one really likes sleeping on a bus, but at the same time, he relishes the opportunity to take in everything the world has to offer.

“I would not be content to spend my career just in the studio all the time,” he said. “I have a really difficult time just being in there, especially if there’s no windows or anything else. I just feel like I’m in a cave the whole time.”

Performing is still his favorite part of the job, Blankenship said. Touring also forces him to visit cities he wouldn’t otherwise and experience things outside of his comfort zone.

“Being away from home is never fun, but we’ve gotten to the point now where my wife can fly in and out of the cities she wants to come into, so we have our families and our support system around us,” he said.

The Kentucky transplant makes his home in Nashville. Blankenship said it was a different world for him before he moved to the country music mecca. In the past, he never spent much time thinking about what was going on with contemporary country or popular music.

That side of the music industry seems unavoidable as stars like Carrie Underwood film music videos within walking range of his home.

In a 2015 feature with Rolling Stone, James had harsh words for the state of mainstream country music, saying it “deliberately dumbed down the human race.”

Blankenship did not accuse modern country of bad intentions, but he did say he thought the music could use some more creativity.

“I don’t have negative feelings toward [modern country music]; I just think it is what it is,” he said. “I think modern pop music is pretty amazing. I think it always has been. Yeah, of course it’s super catchy and super simple, but I think it’s kind of a fun challenge to write songs like that.”

My Morning Jacket exists in an eclectic realm between pop and country. The band’s reputation for taking on music in new ways is the result of an intentional effort to be different and the byproduct of a band filled with adventurous musicians.

“I think part of it is we were just excited to try new sounds every time,” Blankenship said. “We’re all turning each other on to new music all the time from totally different genres. Those kinds of influences obviously work their way into what we’re doing.”

The members do not sit down before a record and decide it will sound a certain way. There are no literal comparisons or blueprints that are made, Blankenship said. Instead, My Morning Jacket’s sound is a result of who the band members are as people and musicians at a given time.

Blankenship doesn’t point to particular songs he’s proud of. It changes from record to record or from show to show. Instead, he looks at the different eras My Morning Jacket has gone through.

At Dawn, its second studio album, is a release the band put out on its own. Z, released in 2005, broadened the act’s range. It transformed all previously established notions of what the group was, introducing elements outside of country and Southern rock music, including synthetic sounds. These projects represent periods Blankenship recalls fondly.

“I could say it about every record because it’s a snapshot in time of who the band was in that year or that couple of years that we were making music,” he said. “It’s kind of cool, like a little Polaroid.”

Though the band has taken creative hiatuses in the past, the bassist doesn’t see any end in sight for My Morning Jacket as it approaches two decades of music.

“I don’t want to put too much into it because you never know what’s going to happen,” he said. “But I also feel like the 17 years I’ve been doing it kind of went by in a flash. Maybe the next 17 years of the band will go by just as quickly.”

My Morning Jacket with The Barr Brothers