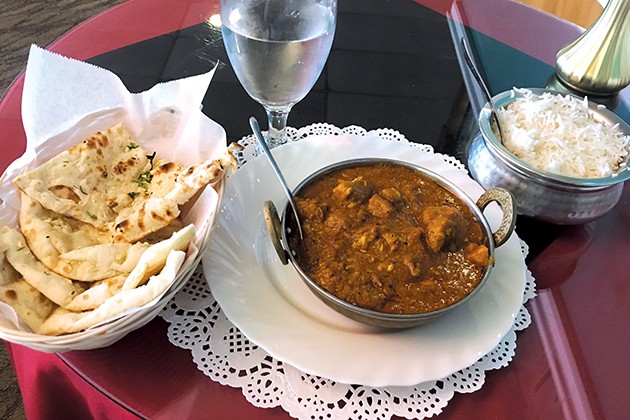 Like a phoenix rising from the ashes, Naan Cuisine of India has been reborn at the former Ajanta Cuisine of India location and quickly become a hit in the Oklahoma City Indian community for providing dishes from the southern part of the country.

I never ate at Ajanta, but I know that it served north Oklahoma City for decades and was likely many people’s first experience with Indian cuisine. Judging from many less than stellar reviews on Yelp, Ajanta’s consistency had fallen in recent years.

After a pair of visits to Naan, I can say that it is likely a marked improvement for that area of the city and diners who might be craving a few Southern Indian dishes.

India is a massively diverse country, but most of the U.S. Indian food at restaurants is limited to standards like tikka masala and vindaloo.

“Was excited to hear of an Indian restaurant opening up in OKC that offers South Indian food,” said Danny on Yelp. “… This is great for OKC as it fills a much needed void.”

Naan offers its full menu at both lunch and dinner, which features north and south Indian dishes. The menu appears large, but it’s actually just split into different protein and vegetarian options with the same preparation options. It offers roganjosh, khomra, saag and kahdai from the north. Varutharachathu, kerala stew and Malabar curry are on the menu from the Indian state of Kerala, on the country’s southwestern coast that is famous for tropical Malabar Coast.

Most of the Yelp reviews from Keralites expressed hope that the restaurant would add more southern dishes, but that will probably come with time.

I was excited to check out Naan and used both my visits to try a few south Indian dishes for the first time. I went around noon on a Monday and found a solid lunch crowd there, many of whom were taking advantage of its lunch specials, which include naan and a samosa in exchange for smaller entrée portions.

I told the server, who was also in charge of seating people, that I wanted to try something new. After initially ordering the chicken kerala stew, she came back a few minutes later to tell me that it was not available that day. Instead, I ordered the chicken varutharachathu, which is a stewed dish with coconut flakes blended in. 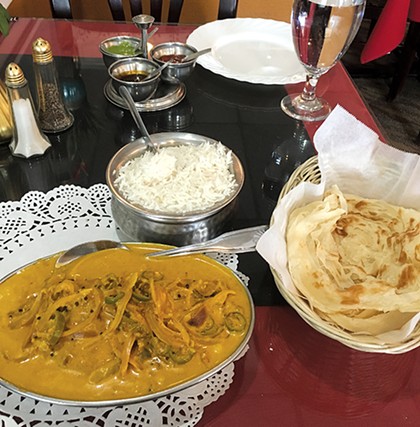 It arrived after about 25 minutes with a side of basmati rice and a portion of garlic naan. The naan lived up as the restaurant’s namesake, but the varutharachathu was the real winner. It was solidly spicy, and the presence of whole cumin seeds in the slightly red sauce showed me that they’re making their own garam masala.

The next time I order the dish, I will probably go with lamb only because Naan used chicken breast, which was slightly dry, even after cooking in the sauce. That’s a personal preference and nothing the restaurant did wrong per se; I almost always buy thighs over breasts when cooking at home.

I returned a few days later late in Naan’s lunch service (it closes between 3 and 5 p.m.) and received swift and friendly service. I ordered Malabar fish curry with a side of kerala paratha instead of naan. I wasn’t familiar with the paratha, but it is native to southern India and similar to naan but layered and much thicker. I’m still thinking about it days later. As good as the naan was, I greatly enjoyed the kerala paratha. It was perfect for soaking up the tasty curry.

Before the main course arrived, they brought out two papadums, a thin baked dough that is almost like a cracker. It’s served with three sauces: mint, tamarind and coconut chutney. I enjoyed all of the sauces, but I wasn’t as big of a fan of the papadum only because the whole cumin seeds in the dough were slightly bitter.

The Malabar curry arrived with the fish covered in onions and peppers. I ordered it medium spicy and could’ve handled more. It was flecked with black mustard seeds, and the fish flavor went throughout the dish. As I mentioned earlier, I will return just for the kerala paratha. After I finished the fish, I kept dipping the dough into the sauce. Between the two dishes, I preferred the flavor of the varuthrachathu.

Since I tried two south Indian dishes, I’m not sure how Naan’s other dishes stack up against other Indian restaurants in the metro area. A few of the Yelp comments mention that the tikka masala was too sweet for people’s taste.

I’m very glad to have made the trek up to north Oklahoma City to check out Naan and try some south Indian dishes for the first time. It’s nice to have more options in the city, and my dreams the next few days will be as layered as the dough in the kerala paratha.

What works:South Indian entrees and the kerala paratha are very good.