Pollard Theatre Company brings Disney’s The Little Mermaid to the stage with an innovative take on the classic tale. 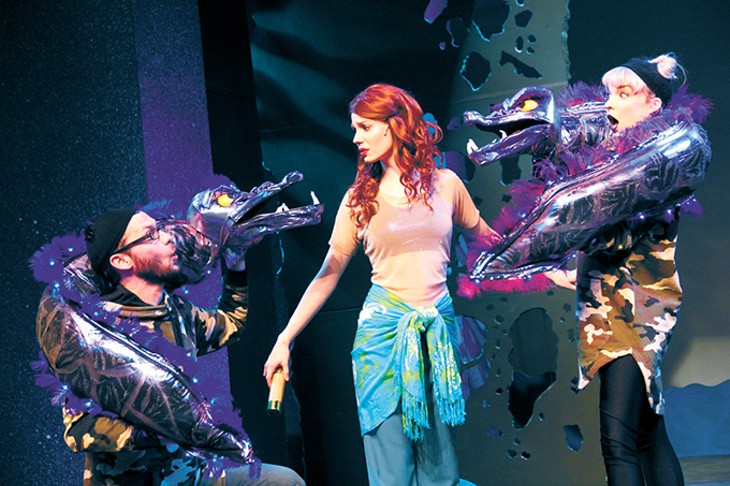 Fantasy and realism — in theory, they’re worlds apart, as different as sea and earth. But Pollard Theatre Company’s upcoming production of Disney’s The Little Mermaid presents a kid-friendly show that unpacks the power of narrative and reinvents the fairy tale through innovative staging and plenty of imagination.

Disney’s The Little Mermaid runs from through May 5 at Guthrie’s Pollard Theatre, 120 W. Harrison Ave. Tickets are $15-$30.

Geared toward children, Disney’s The Little Mermaid draws inspiration from the 1989 animated film following young mermaid Ariel as she yearns to explore the world above her seafloor home. Searching for freedom, Ariel loses and finds her voice — literally and figuratively — as she encounters evil, discovers love and chooses the life she wants to live.

Stevenson is co-directing The Little Mermaid along with Pollard’s production manager, Timothy Stewart.

“It seemed like it would be a ripe opportunity to take a story that, when treated with care, can really be about female empowerment,” Stevenson said.

Although a reputation for over-the-top spectacle often surrounds musicals like The Little Mermaid, Stevenson said that for him and the Pollard, story takes center stage.

“For me, it’s much more important to focus in on the narrative and shared communal stories because, ultimately, I think that’s what theater is about,” Stevenson said. “That’s what we try to do and why we approach such projects, like The Little Mermaid, with such a different philosophy.”

Pollard’s production eschews large set pieces and theatrical devices in favor of centralizing the story. In order to maximize connection with a younger audience, Stevenson said the show would take a unique approach to the frequently told tale of Ariel.

Unlike Broadway productions, Pollard’s version of The Little Mermaid employs a framing device — a literary and dramatic structuring technique that places stories within other stories to achieve various ends.

In the frame narrative, a company of actors produces The Little Mermaid, Stevenson said. The company actors present to the audience — especially younger attendees — the ways in which they’ll create the environment, said Stevenson. Such a technique allows for an evocative version of the musical that fully engages the audience in the act of imaginative creation.

"She’s willing to face those responsibilities and those consequences, and that makes her heroic." — W. Jerome Stevenson tweet this

In order to generate such an environment, Stevenson said it was necessary to create a working space for the actors and then use basic tools of the trade to make everything else.

“A theatrical trunk would provide the elements for the under-the-sea world. We would use common theatrical items like ladder and rope to create a ship or a boat or a window or a door,” Stevenson said. “That gave us a lot more room to play.”

Freeing up staging and technical details also allowed for a greater deal of artistic autonomy among actors, Stevenson said. Unlike the original production, in which actors utilized roller skates to create the feeling of underwater movement, Pollard’s production will aim for more naturalism.

As many characters are kinds of sea creatures or birds, Stevenson said that actors were encouraged to study animal movements and find elements that can be quickly related to the audience.

“You imitate a mermaid or a crab or a lobster or a guppy or a seagull without trying to create a mascot costume,” said Stevenson.

Through its creative approach, Pollard’s The Little Mermaid forges a path between familiarity and inspiration. The musical’s classic songs, such as “Kiss the Girl,” “Under the Sea” and “Part of Your World” are well-known among children and adults alike.

“All of those elements that we latched onto as young theater audiences and the things that made us say, ‘I want to do that for a living’ — we should include those things,” Stevenson said. “What we hope is that there are lots of young people who go, ‘I want to audition for my first play,’ or ‘I wanted to be a part of that theatrical community, because that kind of storytelling is really cool.’”

Although the story of The Little Mermaid has delighted and enthralled audiences for centuries — as fairy tale, film and musical — ways of telling it, and the themes emphasized within it, have changed over the years.

Rather than presenting Ariel as passively waiting to be saved by Prince Eric or her father, Stevenson said that Pollard’s production foregrounds her agency and bravery.

“Ariel is just like all of us: She gets ahold of something she wants … she realizes that to get it, she has to become stronger, she has to be better, she has to save some of these guys,” Stevenson said. “It makes her a real hero.”

For Stevenson, Ariel’s heroism becomes apparent when she takes action, even when she’s not guaranteed a favorable outcome or if she encounters danger.

“She’s willing to face those responsibilities and those consequences, and that makes her heroic,” Stevenson said. “That is something we are really excited about sharing.”

Stevenson said he hopes Pollard’s production of Disney’s The Little Mermaid will reveal to audiences the possibilities of different modes of dramatic narrative.

“There is no wrong or right way to tell the story,” Stevenson said. “Sometimes it’s simply a matter of sharing the ideas and connecting with the audience.”