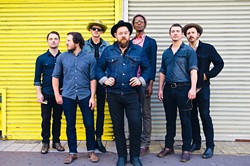 As far as Southern, soul and rock musicians go, Nathaniel Rateliff’s look doesn’t fit the bill. He and his band, The Night Sweats, look more Mumford & Sons than Sam & Dave. But upon hearing Rateliff’s wailing voice, one that somehow strikes a balance between gruff and smooth, there’s no question.

Rateliff and his seven-piece band are signed to Stax Records in Memphis, Tennessee, the former home to soul acts such as The Bar-Kays, Rufus Thomas and the aforementioned Sam & Dave. Much of the group’s latest self-titled album screams the influence of 1960s and 1970s Stax Records and Memphis music scene, which, along with Detroit’s Motown, helped define the era’s soul sound.

“Definitely Otis Redding, soul music like that. Definitely an influence,” Rateliff said about the effect of Memphis music.

Even the album’s cover, a shot of Rateliff’s bare chest under a denim jacket and a necklace, looks to an era decades past.

To define Rateliff and his band as soul rock only would not be a fair assessment. This effort is Rateliff’s fourth full-length album and his first with The Night Sweats.

His past records tend to include more laid-back soul, rock and country guitar-driven tunes. Those sounds still find their place in his current work, but they lack the pep of his song “S.O.B” from the latest album. Southern spiritual verses are driven by hand claps before the chorus erupts as Rateliff yells, “Son of a bitch! Get me a drink!”

While the Rateliff of past albums sounds like a singer-songwriter guitarist accompanied by sparse percussion, bass and horns, the leader of The Night Sweats is a Missouri-born Joe Cocker. But rather than jerking spastically like the late English singer, Rateliff instead employs the silky-smooth shoe shuffle of James Brown.

Though the new songs feature many voices, two saxophones and a trumpet, Rateliff approached the songwriting for the album in a similar fashion to those of the past.

“On this record, I came up with a lot of stuff on my own, at my house, demo work,” he said. “Play bass, beat a drum, play some chords and sing the other parts I wanted in there.”

However, the sum of this formula differs from his prior efforts. The horn section produces a thicker sound, and the overall sound is livelier.

Rateliff’s lyrics come across as quite personal, though he admitted his songwriting does not always have a clear premise.

“Relationships and stuff,” Rateliff said about lyrical themes. “You don’t always know what a song’s about till later.”

The soul Rateliff and his band create took root not in Motown or Memphis’ Beale Street, but in rural Missouri. He was born in Hermann, Missouri, in late 1978. He spent most of this first two decades of life in the small town, known for its wineries.

Rateliff struck gold by combining this down-to-earth, country appeal with Southern city soul that is heard in the wailing of his voice and expressed in his and the band’s appearance.