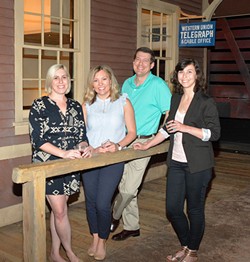 As National Cowboy & Western Heritage Museum organizers considered ways to appeal to millennials, they were pleasantly surprised to discover their allure for one of the old American West’s most storied institutions: the saloon.

The museum debuted its Saloon Series, a fun and informative whiskey tour and live music event last week. It continues 5:30-7:30 p.m. each Thursday through July.

For $25, guests receive a whiskey flight with at least three pours, a full drink ticket for the bar, a plate of food, extended-hour museum admission and a whiskey class based on the night’s theme. The series also features music by popular local performers.

“We wanted to make it so that it could be fun and educational and social,” Wolins said, “which is what museums are all about these days.”

Wolins said the museum surveyed its youngest employees to learn more about how it could expand its audience.

“We realized that the majority of museum visitors were either very young children or what I would call mature adults, which is not unusual in the museum world,” she said.

Wolins said the museum is excited about the Saloon Series and hopes to continue it in the future.

“We think we’re really onto something,” she said. “We think this is the right thing at the right time in the right setting.”

The event also is open to non-whiskey drinkers. Admission without a whiskey flight is $5.