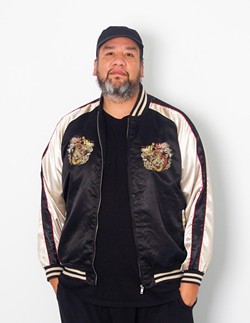 Jeffrey Gibson finds inspiration in everything from song lyrics to inanimate objects. It’s what prompted the title for his solo exhibition Speak to Me, on display through June 11 at Oklahoma Contemporary Arts Center, 3000 General Pershing Blvd.

“I use appropriated language such as song lyrics, poetry, writers who have influenced me, and I’ve also always been drawn to hymns,” said Gibson, a multimedia artist who works with painting, sculpture, fiber, ceramics, video and performance.

He features this appropriated language, along with his own words, on pieces that include everything from beaded panels to sculpture. His interest in spiritual hymns comes from his grandfathers, both of whom established Native American churches.

But while his Cherokee and Choctaw heritage influences his art, it doesn’t define it, as Jennifer Scanlan, Oklahoma Contemporary’s curatorial and exhibitions director, notes.

“That Native American aspect of his identity is very important to him, and that’s sort of a ground for his message, but his message is that that’s not all his art is,” Scanlan said.

However, Gibson’s connection to Oklahoma through his family does make this exhibition especially meaningful for him, especially since it’s his first large solo exhibition in the state. It’s also special because of the meaning it will have to many Oklahomans.

“There’s a large Native community there that has gone and is going to go through the exhibition, and I don’t have that audience here in New York,” Gibson said.

Another major component of the exhibit is Gibson’s short film one becomes the other, which he created during his residency at the Denver Art Museum. The video, which features members of the Denver powwow community having conversations with artifacts, provides context for Gibson’s work and its connection to Native American powwow culture, regalia and other artifacts.

“In the video is where you get to see everything together, so that was really important,” Gibson said.

For Scanlan, it’s one of the most moving parts of the exhibition because it comments on the experience of being Native American, but it is also universal.

“We all have objects in our homes, in our possession, that are really important to us, that perhaps remind us of other people, of experiences, of family members, of where we came from,” Scanlan said.

Some of Gibson’s inspirations are personal, but he also looks to society, especially communities with collective identities.

“Sometimes it’s a social movement or political movement; sometimes it’s civil rights or feminism, different kinds of communities of people that have formed language or what they wear as a way to identify themselves,” Gibson said.

Because he works in several mediums, the studio is a place where anything goes, and he can use whatever combination helps him convey his message.

“It’s just how my mind works, trying to get the same ideas but moving back and forth between materials so people can see that the ideas are more fluid than the medium,” he said.

He began drawing as a child but didn’t seriously think of making it a career until college. He started out majoring in psychology and anthropology before transferring to Art Institute of Chicago after two years. His work is featured as part of the permanent collection of Smithsonian Institution and other major museums, and he also has pieces at Tulsa’s Philbrook Museum of Art. 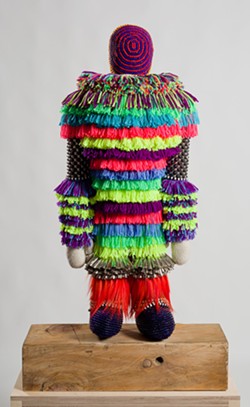 Speak to Me includes a Learning Gallery in which visitors can touch the materials Gibson uses in his art and use a threading station to create their own works. Visitors can also get a firsthand look at the role materials like fringe, beads, coins and other items play in Native American culture through photographs by Lester Harragarra of powwows and other cultural gatherings.

Oklahoma Contemporary has several other features accompanying Gibson’s exhibit, including the New Native Art event featuring artist Nathan Young that took place April 1 and several short films and video art pieces from other Native American artists. Young, a multimedia and sound artist, performed “Lullaby for Peyote Tapes,” which was inspired by the cassette tapes used from the 1970s to 1990s by members of the Native American church or Peyote religion.

Members of the Native American community traded these tapes, creating an informal network in which people might learn songs from tribes all across the country and listen to people they’d never met in person.

Young inherited many of these tapes from family members and later got involved in experimental music, even forming his own label called Peyote Tapes. The sharing is now done via YouTube, but Young hasn’t forgotten this early method.

“It’s a reference to these medias kind of hibernating and changing but also morphing into other ways of sharing,” Young said.

Young works with sound, composition, performance and installation and said that being able to blur the lines helps him tell the story in the way he wants to share it.

“I’m trying to tell a very complex story, and it kind of requires that kind of freedom to touch on all the different facets,” Young said. 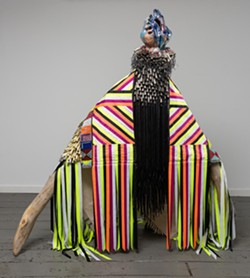 Jeffrey Gibson: Speak to Me