“People think, ‘Oh, well, it’s been done,’ but no, it hasn’t,” artist Brent Learned said. “There hasn’t been a whole exhibition about this type of artform.”

When Oklahoma City artist Brent Learned explains his latest art exhibition concept to other people, he sees a lot of raised eyebrows.

Learned, a member of the Cheyenne and Arapaho Tribes of Oklahoma and creator of 2016’s popular Native Pop! art show at Paseo Plunge, hosts Native American Body of Art July 7 at Oklahoma Shakespeare in the Park’s Paseo Art District gallery, 2920 Paseo St. He said the new exhibition will be one of the first — if not the only — all-nude Native American art shows featuring Native American artists.

Learned acknowledges his claim might sound unlikely, but through research, historical reasoning and talking to other Native artists, he said the show is very likely breaking new ground.

“People think, ‘Oh, well, it’s been done,’ but no, it hasn’t,” he said. “There hasn’t been a whole exhibition about this type of artform.”

Some people are hesitant to support nude art exhibits, regardless of concept. Considering the modern, more sensitive approach to Native imagery, even some Native artists have told Learned they were skeptical of his idea. He insists Body of Art is a tactful celebration of the Native American body.

“How is it taboo, and how is it wrong?” he said. “My tribe — Cheyenne and Arapaho — we literally would fight in the nude. We don’t have a constitution that tells us what’s right and what’s wrong when it comes to art because the art is an expression. If your tribe has that, I’d sure love to see it.”

The style of works will vary by artist, and Learned said he wants all works to be something one might find in a museum — classical and tastefully composed.

Learned is including several of his own pieces in the show; many feature nudes in majestic, Roman-like poses. His work includes depictions of a pregnant woman and breast-feeding, which he calls some of life’s greatest beauty.

His idea for Body of Art was partially inspired by a conversation he had more than a decade ago about a nude painting he made and was showing at a Native marketplace in Wichita, Kansas. The director of a local Native American art museum liked his work, which was inspired by an actual 19th-century photograph by William S. Soule, and said he wanted to buy it and add it to the museum’s collection. Before he could do that, he needed approval from the museum’s CEO, who examined the painting and declined to buy it.

Years of religious rhetoric, he said, has made nude art and nudity in general taboo for many. That thinking seems counter-intuitive to him.

“If you’re a person who believes in a Creator,” he said, “you’d think you’d want to bring Him honor by depicting one of His creations on canvas or on paper.”

Another inspiration for Body of Art came from a video Learned recently saw about the history of nude art. He said the video asserted that 85 percent of professional artists are male and 80 percent of nudes found in museums are of females by male artists.

“Those stats are so out of whack,” he said.

When putting together Body of Art, Learned made it a point to include more female artists than male. This was partly to help correct a historic imbalance between the genders in nude art, but also because Native women are statistically more likely to be victims of sex crimes.

According to statistics by the United States Department of Justice published in 2004, Native women are more than twice as likely to experience a sexual assault crime compared to other races.

When Native women are painted nude, it is often in a sexualized way. Learned said he too once depicted Native women in ways that were overly sexual or objectifying, but he has since changed.

“I started doing the research,” he said. “Once I realized what the research was on that, I stopped.” 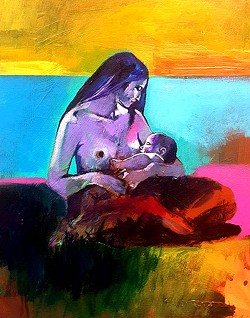 When Learned got his idea for Body of Art, he himself could not think of many examples of Native American nude art. He did a lot of internet research to try and determine what was out there.

“You really come across almost pornographic material,” he said. “And if you don’t, you come across really cheesy images of females with a wolf or that stereotypical bullshit.”

He asked his friends and fellow Native artists if they could think of any examples of Native nude paintings or art exhibitions.

“When it came to Native American nude art, they were like, ‘You know what; we’ve never really seen any,’” Learned said.

A variety of converging factors likely go into why there is an historic absence of Native nudes by Native American artists. His theory is that colonization and forced cultural conformity pushed Native art to skip several natural phases.

“You look at every culture around the world, and they had their own renaissance, especially Europe,” he said. “With Native Americans, when white migration happened, [certain tribes] went from living on the plains to all of a sudden being assimilated.”

Many Native people were put in boarding schools and taught that their language, clothing and culture was wrong. Many generations lost touch of their cultural identity, Learned explained. In later eras, when that awareness reemerged, Native art had already progressed to contemporary or pop styles not usually concerned with classic nude forms.

Through mass cultural assimilation, Native art was robbed of the chance for natural progression that other cultures experienced.

A tour also is possible for Body of Art. The exhibit is scheduled later this year at a gallery in Lawrence, Kansas.

Learned said there is a strong national appetite to see Native art that goes beyond traditional works and defies stereotypes.

“Everyone from around the country who comes and sees [Native Pop!], they’ve really enjoyed it,” he said. “They say it’s like an exhibit they’ve never seen before.”

Oklahoma Shakespeare in the Park