After nearly three years of piecing together her independent music debut, Janessa Monetathchi is ready to celebrate.

Under the stage name Rockstar Diamond, the mostly acoustic musician and singer-songwriter hosts a private CD release party Saturday in Sulphur for her new album Fire. Monetathchi is planning a public release at a future date, but for now, she wants to take the time to thank those who helped make her dream possible.

“These people have stuck with me all this time, so it’s more or less for them,” she said.

Monetathchi lives in Tishomingo, a south-central Oklahoma town of about 3,000. Part of what makes her album distinct is its partial incorporation of the Chickasaw language. In addition to song titles “Napakali” (meaning “wildflower”) and “Chokma” (“good”/“hello”), Fire includes 14 different Chickasaw words among its mostly English lyrics.

Monetathchi is Chickasaw, Cheyenne and Comanche. She said she began incorporating Chickasaw words into her lyrics as a way to learn the terms for herself.

“I don’t know my whole language yet, so it’s like I’m learning too as I go,” she said. “It’s very interesting.”

She previously worked as a cultural instructor at Sulphur’s Chickasaw Cultural Center. Her experiences with visitors inspired her to use music to teach others about her culture and how modern Native Americans live. Monetathchi said some assume everyone still lives the same way their ancestors did hundreds of years ago.

Through her work at the cultural center, Monetathchi learned to make things like moccasins and bows. She also stomp dances. But she still goes out to casinos, sees live music and enjoys life in just like many other young women do.

“In the cultural center, you see people from Sweden or Japan — or even people who are just four or five hours away from you — and they don’t really understand how Native Americans live,” she said.

Monetathchi hopes other Native American youth will hear her music and understand that they do not need to choose between two cultures.

“Even someone who is not Native American,” Monetathchi said.,“they can look at the songs and say, ‘This is interesting; this is unique.’” 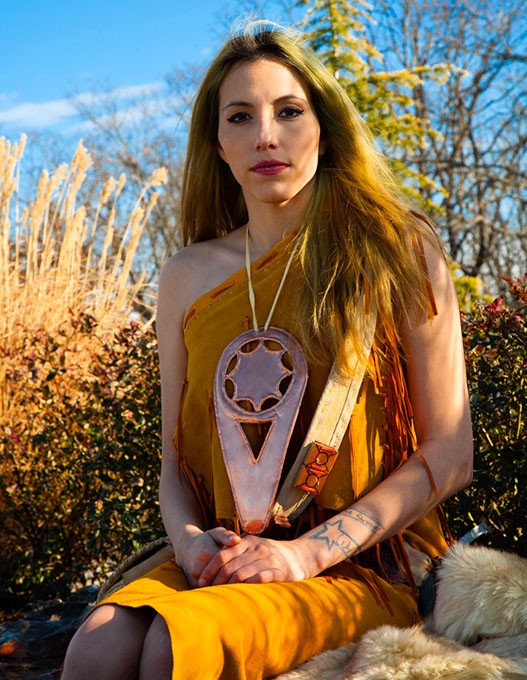 The songwriter chose Fire as the title of her debut because it’s a short, visual and punchy name. It could also be an extension of Monetathchi’s inner flair. Presentation is always one of her priorities. She is interested in facepainting and is toying with the idea of making it a part of her Rockstar Diamond persona.

“I love glitter, so I thought about putting that on,” she said. “But then I thought to myself, ‘What if I did a whole fire thing around my eyes?’ Then I was like, ‘What if the people at the concert got their face painted too?’”

She is taking her new career in music seriously. She started Rockstar Diamond Music company earlier this year and has dreamed for years of being an entertainer.

She has kept a diary since she was a young girl. One day, it occurred to her that her notes could also become lyrics.

She and her siblings grew up singing in various churches and listening to music from Christian rock bands Petra, GS Megaphone and Disciple.

Though most of the songs on Fire have limited instrumental backing, Monetathchi aspires to one day achieve a sound similar to Lynyrd Skynyrd, Kansas, Journey and other vintage hard rock bands. She said Fire is most often compared to Jewel or Cher.

Monetathchi hopes her debut is well-received, and she wants to tour and start work on its follow-up in 2017.

“I’ve been working on the same songs for so long,” she said. “It was hard getting the funding, because I had to work to make this happen. I worked really hard, so I want to work on some new songs now.”

After taking years to prepare her first project, she is eager to see what the future holds.

“I want to start writing as soon as I can, maybe even on the road,” Monetathchi said. “I think it would be so great to write another album as soon as I possibly can.”