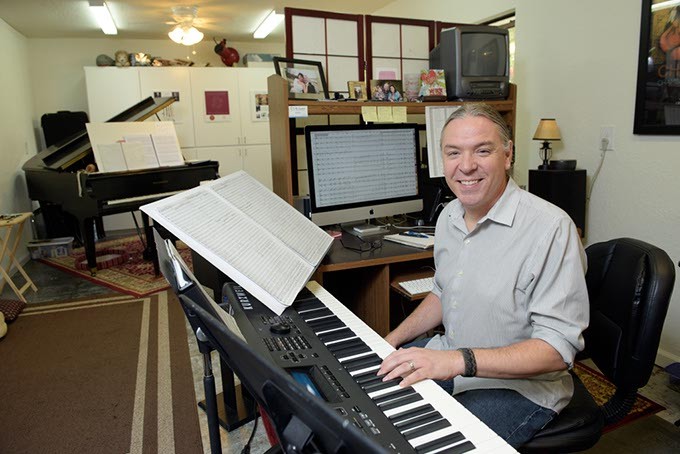 A centuries-old artform will take the Chickasaw language where it has never been before.

Misha’ Sipokni’ is about 35 minutes long and will include English supertitles. Tate, known as an American Indian composer with other works in the Ponca and Creek languages, was commissioned to compose this work by Canterbury Voices.

The piece is for a full orchestra, a full adult chorus, a children’s chorus and three vocal soloists (a soprano, a tenor and a baritone).

“Oratorios are like an opera onstage but without costume and lighting and that kind of thing,” Tate said. “The singers and chorus stand almost like you’re doing a narration of a Greek play without the acting.”

The story tells the tale of the ancient migration of the Chickasaw and Choctaw tribes east to modern-day Mississippi. There was unrest in their home region, possibly caused by the Aztecs, and the tribes needed a new home.

“I see it as very similar in its epic tale to the migration out of Egypt,” Tate said. “Take your people, you’re going thousands of miles and that’s a big deal.”

The tribes, according to tradition, were led by two brothers called Chahta and Chiksa’. To this day, Chickasaw and Choctaw tribal members view each other as distant cousins.

Before they embarked on their journey, The Creator gave the tribes two sacred gifts. One was a migration pole they planted into the ground each night. Whichever way it was leaning when they woke up in the morning was the way they were supposed to travel.

The other gift was a sacred white dog to bring them encouragement, warn them of enemies, apply medicine and be their spiritual center.

The tribes traveled together until they reached the vast Mississippi River. It seemed impossible to cross, but the pole was directing them to the other side. Tate compared this part of the story to the crossing of the Red Sea by Moses and the Israelites.

As they pondered a way to the other side, the dog jumped in the water to show them the way.

But he perished in the water just before he could reach the other side.

At that point, the community could give up, but instead, it decided to honor the dog’s sacrifice and cross. Tate said honoring ancestral sacrifices is a big part of what drives him and others today.

“To me, it’s a really big deal,” he said. “My ancestors walked 800 miles from Mississippi to [Oklahoma], so am I going to sit here and cry? No. It’s like they did it for a reason, so I’m going to stand on their shoulders and become a successful person because that’s what they wanted for me.”

Tate is not yet a fluent Chickasaw speaker, so he worked closely with Joshua Hinson, director of the Department of Chickasaw Language for the Chickasaw Nation, to translate and adapt his English script. The composer compared Hinson to a modern-day Sequoyah.

“It’s groundbreaking because he’s creating poetry in the language when we’ve never had poetry in our history,” he said.

Hinson, in an email to the Gazette, said he was familiar with Tate’s work as an American Indian composer before they began collaborating in earnest on the oratorio in spring 2016.

“The thing that I’ve always loved about his work is his indigenization of foreign art forms, in his case classical music specifically,” Hinson said. “He uses the language and music of our ancestors in this classical context to craft something that is wholly new and wholly Chickasaw.”

Tate’s goal is that the significance of the work not be lost on those who see it. He makes it a point to put great effort into every detail.

“At the end of the day, I want the audience to go, ‘This is important. This is really critical,’” he said. “I want them to feel the ethos of that all the time.”

Together, two young Chickasaws created a work of art unique in the tribe’s history.

Hinson said the Chickasaw language and people are not relics from the past but a living, breathing and, most importantly, evolving modern force.

“Our way of life, our culture and our language, are not elements of some lost, ancient past; they’re decidedly contemporary,” Hinson said. “[It’s] 476 years after first contact, [and] we’re still here. And we’re still creating, growing, adapting and moving forward — and still speaking our language.”

Including the premiere of Misha’ Sipokni’ (The Old Ground)