Native Oklahoma artist Harvey Pratt was chosen to design a memorial at a Smithsonian Institute museum in Washington, D.C. 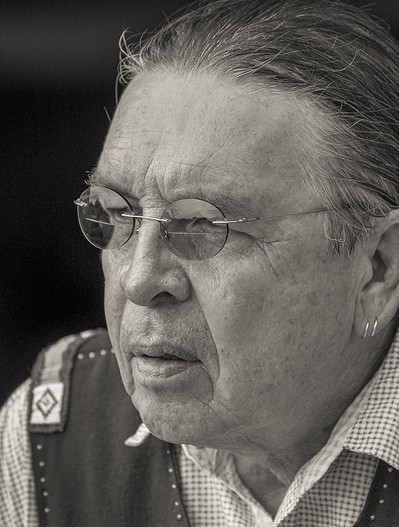 Cheyenne/Arapaho artist, 2017 Oklahoma Creativity Ambassador and El Reno resident Harvey Pratt almost didn’t submit a design for the very contest for which he was recently awarded a unanimous selection designation. Last month, Pratt was named winning designer during a competition process for a federally authorized commission by Congress to complement the grounds at Smithsonian Institute’s National Museum of the American Indian (NMAI).

His winning work, “Warriors’ Circle of Honor,” features multisensory elements and encompasses traditional features shared by a range of tribes across American lands. The National Native American Veterans Memorial will break ground on Sept. 21, 2019, the 15th anniversary of the museum; however, as a recent retiree, it took a close friend to enlighten Pratt, a Marine Corps veteran, about the gravity of his accomplishment.

“After I won, someone said, ‘Harvey, you’re going to be on the [National] Mall with 11 other national memorials,’” Pratt said. “I’d never thought about it. At that point, I was trying to do a good job and be competitive. [He said,] ‘You’re going to be there as long as there is an America.’”

Luckily, Pratt started on a design concept in December and the rest will very well be history. 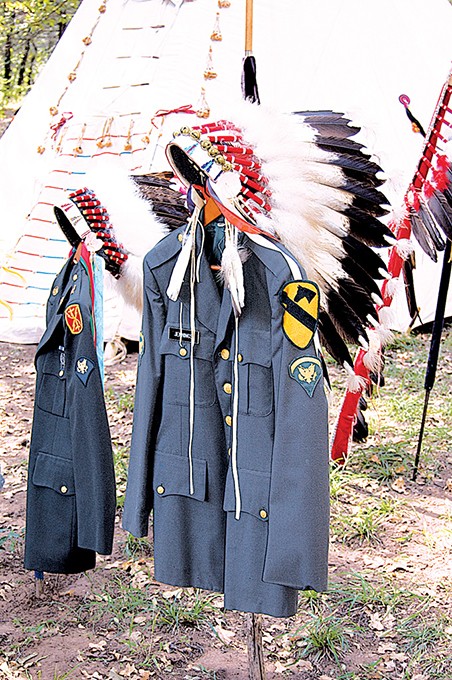 Rebecca Trautmann, project curator for the memorial, shed light on the selection process, which began with an advisory committee of about 30 members, including co-chair lieutenant governor of the Chickasaw Nation Jefferson Keel and fellow Native American veterans, family members and tribal leaders.

From 2015 to 2017, representatives from NMAI traveled across 16 states and the District of Columbia, consulting with 1,200 people across the country to gain insight for drafting the design guidelines. The process helped them better understand what the most vested parties wanted to see in the memorial, what story needed to be conveyed and what the takeaway of visiting the memorial should be.

Pratt attended one of the conversations conducted in Oklahoma. Discussions were hosted by Choctaw Nation, Cheyenne & Arapaho Tribes, Comanche Nation and Cherokee Nation.

"Something in this memorial will fit everybody." — Harvey Pratt tweet this

That collective nationwide conversation and feedback is what directly shaped the criteria, including a desire for the tribute to be inclusive of indigenous people and veterans across the country (including Native Americans, Alaska Natives and Native Hawaiians), for men and women to be honored and for all branches and eras of service — from the Revolutionary War up to the present and through the future — to be recognized. Additionally, the support of families and guidance of spirituality was paramount, as was a designated space for remembrance, reflection and healing. Native Americans willingly serve in the military at a higher rate per capita than any other population group since the American Revolution.

The competition was announced on Veterans Day 2017. 120 Stage 1 design entries were received, which were narrowed down to five Stage 2 finalists.

“Then the jury spent a few days really discussing, deliberating over these five designs,” Trautmann said. “Each of the [finalists] also presented their designs to the jury. The jury really talked about which of the five designs they felt best accomplished [needs] based on what we’d heard in our consultations.”

There was a unanimous agreement that Harvey Pratt’s design did just that. 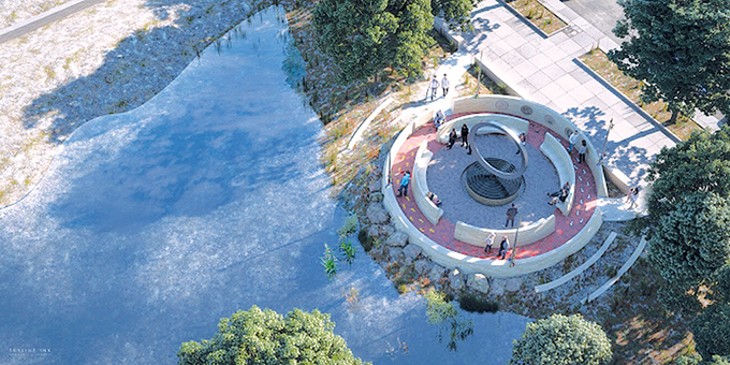 Pratt is an internationally renowned forensic artist, painter and sculptor who was born in Oklahoma and retired in March 2017 after 50 years in law enforcement. He recalls hearing that there was going to be a memorial to honor Native American veterans after attending one of the Smithsonian’s early discussions with Cheyenne & Arapaho Tribes’ director of veteran affairs’ Russell Willey while helping with research on Cheyenne Code Talkers in WWI.

“So we went, and I listened and he said, ‘Harvey, you oughta do that,” Pratt said. “I said, ‘No, there will be huge companies, architectural firms working for that. There’s just no way you could compete with guys who do that thing for a living.’”

Willey continued to encourage Pratt to submit for the Smithsonian bid. He thought about it. He slept on it. Then he dreamed about it and a concept appeared that seemed to fit the requirements once they were announced.

The thought centered on the idea of water, fire, earth and wind.

“Those are things that all tribes have a reverence for, and they use those things in their ceremonies, so I thought, ‘Well, that’s a start,’” Pratt said. “I got the idea that things evolve in circles — [it’s] a timeless thing and endless; you can step into it at almost any part and circle back and do it again. I said, ‘A vet or war mother could come in there and choose their direction.’”

Acknowledging the ceremonial songs that contribute to honoring veterans, Pratt included a speaker system in his design. Uniquely, that hadn’t been done before. The memorial will be equipped to play those songs, with auditory attributes coming from the beat of drums, the sound of voices and the water element. An eternal fire component wasn’t allowable; however, a ceremonial fire might be lit for special occasions.

“So I included directions, five military seals, we had the four elements, cardinal points and I thought I’d include the sacred colors,” Pratt said. “Something in this memorial will fit everybody so they [can] come in and do it the way they do it and not what someone else is doing.”

Pratt’s designs started on lined yellow legal paper, and he began drawing in December 2017 right before Christmas. He expanded materials to grid paper and enlisted his son and wife for the design team. It was his son who suggested that  they animate the process in order for it to really come to life. The family affair grew to include help from local, yet nationally recognized animation and design firms Skyline Ink and Butzer Architects and Urbanism to bring the designs to life and has continued to encompass various other architects.

By June 1, the team had to have everything submitted, including designs, plans, exhibits and 34 pages of dialogue explaining what they wanted to do and what exactly it meant. There will be some slight modifications along the way and many visits to D.C. in the meantime to ensure that the core values remain intact.

Pratt’s gratitude and pride resonates in the tone of his voice. Upon returning from Vietnam, he maintained his warrior mentality as a Marine and still wanted to help people. Though he’s retired, Pratt said it’s hard to say no to someone in need. He’s one of the Southern Cheyenne chiefs and said he first gained respect for veterans as a child and is thankful to teachers for helping him recognize his talents at an early age.

The National Native American Veterans Memorial is slated to open in late 2020. To date, close to $3 million has been raised of the $8 million needed to cover the cost of building the memorial.