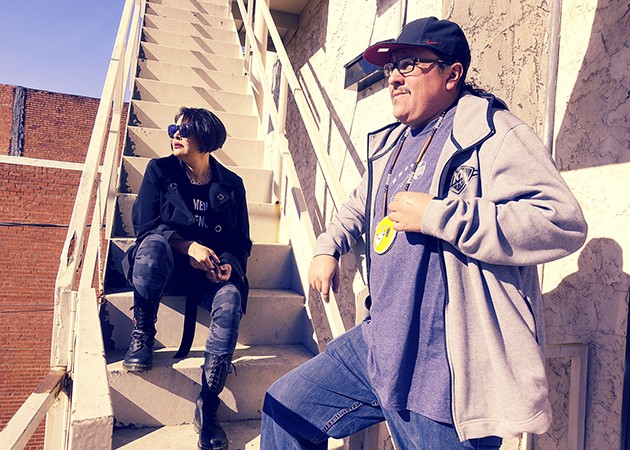 Them Damn NDNs are at it again, pumping the airwaves full of relevant news, friendly conversation and a heterogeneous compilation of music broadcasted to audiences across the globe. Hosted by Kellie J. Lewis and Thomas Ware III, the three-hour program is only a snapshot of the duo’s effort to put TalkJive Radio on the map.

Founded by Lewis last year, the fledgling station was launched July 2 in Chickasha as a 24/7 stream designed to keep listeners informed and entertained, providing independent artists with a platform while simultaneously highlighting key issues of national and international significance.

No stranger to radio, Lewis’ earliest on-air experiences began while she was still in high school. Later, she found work with two different stations in Anadarko and eventually went on to co-create Red Dirt Radio Oklahoma with Collin Hudson before taking a hiatus from the industry altogether.

She decided it was time to step up to the plate and move forward with a plan that would make her dream a reality. All she had to do was find a team of people to back her, along with an appropriate co-host with a similar vision and taste in programming.

With Pawnee, Kiowa and Wichita blood running through her veins, she knew she wanted to target the Native American audience, though not exclusively. It was important she have a strong focus on this demographic while keeping the station an attractive option for a diverse audience in locations around the world.

“It was important to me to bring the American Indian community in, because that’s what we are,” she said. “So we want to make sure that we’re reaching them.”

Around the time she got to thinking who she would bring onboard, Lewis crossed paths with Ware, an old friend and son of renowned musician Tom Mauchahty-Ware, a posthumous 2017 Oklahoma Blues Hall of Fame inductee. Having been raised by a singer, dancer, flautist and blues musician who made a name for himself in powwows across the nation, Ware would become an invaluable asset for Lewis’ station programming.

“He did a lot in his life and really accomplished a lot,” Ware said of his father. “So that’s where I get a lot of my knowledge and my point of views on a lot of stuff. ... He was really important in my life.”

“The first thing Thomas said to me when I approached him about [the station] was ‘Man, that would’ve been perfect for my dad.’ I’m like ‘Yeah, I know, but you gotta do this now,’”Lewis said.

Though he’d never hosted a radio show, Ware had the knowledge and experiences he’s carried with him since childhood. A history of musical performance, involvement in live shows and public speaking didn’t hurt either, leading him to describe his new on-air roles as host and producer “a natural suit.”

“It was important to me to bring the American Indian community in, because that’s what we are.” — Kellie J. Lewis tweet this

As the air date approached, Lewis and Ware prepared themselves for an unforgettable debut when, just two days prior to launch, they discovered their broadcasting platform wasn’t going to work. If they had any hopes of bringing the station to an international audience, they would have to think fast.

Just under 48 hours from the premiere and it was back to the drawing board for the folks at TalkJive Radio. In what they describe as “a really crazy time” when they would have “to learn a whole new everything,” the team pulled through, successfully broadcasting their station according to schedule.

A year and a half later, the crew exhibits the same dedication they demonstrated at the beginning of their journey. Every weekday 11 a.m.-3 p.m., Lewis and Ware host Them Damn NDNs, in which they play music and take periodic breaks to discuss relevant issues or stories, at times focusing attention on underreported stories that pertain to the Native American community, though this is not always the case.

“We know people from all across the U.S. and Canada and different native communities that kind of clue us in to the things that are going on ... things that may not make national news that we still feel like we want to talk about,” said Ivy Smith, producer and business manager at TalkJive Radio.

At noon Saturdays, listeners can tune into The Crow’s Nest, which features civil discourse between Lewis, Ware and Dr. Kevin Crow, Professor of History at University of Science and Arts of Oklahoma (USAO) in Chickasha, covering a wide range of current events and the issues that pertain to these matters, accompanied by an unbiased approach.

“The show is meant to give … intelligent, rational discourse without it evolving into everybody shouting,” Lewis said. “It just really shows that it doesn’t matter what political party you are, everybody’s got the same concerns. … A lot of people are fed up about how government works no matter what party they’re with.”

Audiences with interests outside the realm of news and politics are invited to tune into Praise Hymn, a segment running 8-10 a.m. Sunday mornings in which American Indian hymns are sung in different languages. A two-hour gospel block follows 10 a.m.-noon, which marks the beginning of Sunday Social. During this time, listeners can hear a variety of community organization leaders discuss their organization and what goals they hope to accomplish.

Sports fans are also given an outlet where they receive 30 minutes of updates from local teams ranging from high school-level athletics to University of Oklahoma Football to Thunder basketball.

Midnight every Friday, Ware retraces his roots with his Friday Night 49, when he discusses and plays Native American war journey and round dance songs, preceded by a powwow hour at 11 p.m. Ware is both Kiowa and Comanche.

Of the shows broadcasted by TalkJive Radio, Ware cites Hip-Hop Tuesdays as his favorite. Once a week from 8-10 p.m., Ware hosts a segment that stays true to the station’s original mission: to provide independent artists with an opportunity to expose their music through a public medium. Meanwhile, he hopes listeners will not only enjoy, but also take time to listen to the stories they share.

Them Damn NDNs also plan to attend South by Southwest in March and are currently working on a sponsorship with the Honolulu Intertribal Powwow.

“It’s kind of stressful sometimes, but we do have a good time,” Lewis said. “We have a really good camaraderie with each other and it works. I’m just so incredibly lucky that we get to do this everyday.”