An exhibit at OKCMOA features the work of internationally famous photographer Ansel Adams and those he inspired. 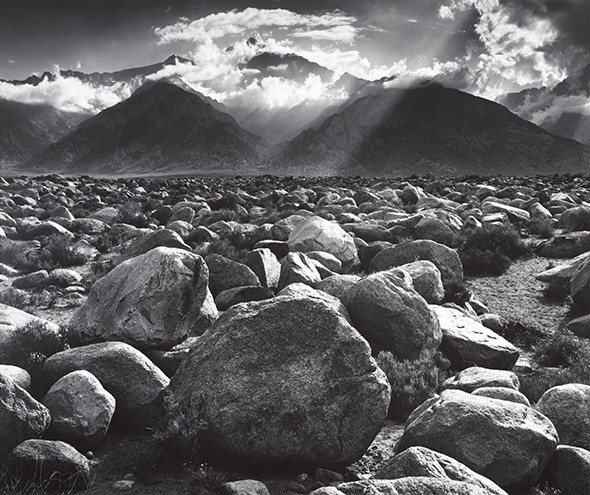 “You make a photograph; you don’t take a photograph,” said Francesca Giani, curator of modern and contemporary art at Oklahoma City Museum of Art (OKCMOA). “There’s so much that goes into the creation of that image. It’s an artifact, so the artist’s ability consists of looking at that scene, at that landscape and responding to his or her emotional reaction and finding the best way to translate that emotional reaction into the final image. And that is what Ansel Adams did in a successful way.”

Photos by Adams and others he inspired are on display in the exhibit Ansel Adams and the Photographers of the West Friday-May 26 at OKCMOA, 415 Couch Drive. Adams was born in San Francisco in 1902 and became famous for his striking black-and-white photographs of the American wilderness and his outspoken environmentalism as director of Sierra Club.

“I think that the key in Ansel Adams’ success was the fact that first of all, he was an idealist,” Giani said. “He really believed in his work, and that inspires the images and the art he created. … And the technical quality of his work — he was a magician of the dark room. Photographers, people in the field, have always been able to recognize that he sort of pioneered things like the zone system and the idea of previsualization, things that were revolutionary at that point. He found a very effective way to convey his intentions when looking at a scene, his intentions of what he meant to portray in the photograph, and he managed to find technical ways to create that photograph.”

The zone system allows photographers to determine the right film exposure and development to achieve the effect they originally envision when taking a photograph. Though digital photography has in many cases made photo-editing software mastery more important than dark room magic, Adams’ guiding philosophy and the work he created are still relevant to modern photographers, Giani said. Adams was born at the turn of the 20th century, and his philosophy was inspired by the past but considered the future.

“He was the visual heir in many ways of writers and thinkers like Henry David Thoreau and John Muir, these very early environmentalists,” Giani said. “He truly believed in the power of beauty and the uplifting moral dimension of beauty in nature. So he responded to the previous century, but he was also a very modern environmentalist. He was in the field, and he was a very active, serious environmentalist. He lobbied and rallied and put presidents on the spot.”

The exhibition features seven Adams photographs dating from the late 1920s to 1968 as well as photos from photographers he inspired.

These photos include dye-transfer prints of Eliot Porter’s photos of the Glen Canyon region, which Giani described as “images of incredible power” with “very intense, very saturated colors.”

“It basically captures a region or an area that no longer exists in a sense,” Giani said. “The tributary canyons of the Glen Canyon were flooded when a dam was built in between New Mexico and Arizona, and the biology of the place, along with some Native American sites, were lost forever.”

To Giani, Adams’ aesthetic and ethos are best conveyed in Mount Williamson, Sierra Nevada, from Manzanar, California, featured in the exhibit.

“There are some rocks in the very immediate foreground, and it basically looks like the camera was positioned on the ground or on a rock,” Giani said. “So imagine these rocks that are right on your face, and then you have this visual of this land of rocks and then at the end toward the horizon, you have the mountain. In between the mountains and behind the mountains, you have these clouds and the sunrays filtering through the clouds and through the mountains. It’s an incredibly evocative image. It’s something that hit him almost on the spot because he had seen the landscape before, but it was only when the storm arrived that he felt he could sort of capture the place and its beauty.”

The photograph was originally part of a series Adams shot at an internment camp for Japanese Americans during World War II. In Born Free and Equal, a book collecting these photographs, Adams wrote, “In these years of strain and sorrow, the grandeur, the beauty and quietness of the mountains are more important to us than ever before. ... The huge vistas and the stern realities of sun and wind and space symbolize the immensity and opportunity of America — perhaps a vital reassurance following the experiences of enforced exodus.” 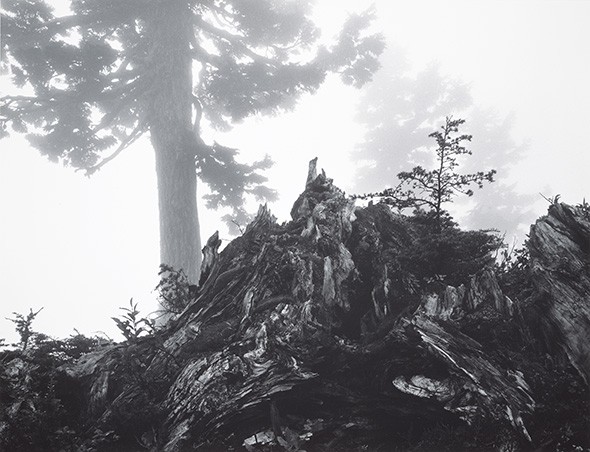 The Born Free and Equal exhibit was briefly on display at the Museum of Modern Art (MOMA) in New York City. In a Jan. 18 Washington Post op-ed, Adams’ grandson Matthew Adams wrote, “It was wartime, and there was virulent anti-Japanese sentiment. The exhibition closed prematurely. The book was pulled from the shelves and burned. The U.S. government shuttered the internment camps and returned people to their homes the next year, before the end of the war and, significantly, before the Supreme Court had an opportunity to rule on the matter. The camps were illegal and immoral, and the government knew it.”

Mount Williamson is the only Manzanar photo on display at OKCMOA, but Giani said it captures Adams’ view of nature.

“The rest of the series depicts the daily life of the people imprisoned in the camp, but this photograph in particular depicts the landscape, the incredible view that you could see from the camp,” Giani said. “He was always very attracted to landscape and to nature. That was his life’s obsession, and almost immediately as the Great Depression hit followed by World War II, he experienced criticism from other photographers who were more socially engaged and would photograph breadlines and the suffering of people. So he always felt a sense of inadequacy … but at the same time, he firmly believed in the social value of the landscape and the social value of nature. … When wars and conflicts are over, nature will be there.”

Ansel Adams and the Photographers of the West