John Rex Middle School has no loud alarm that rings letting students know that it’s lunchtime and no locker doors slamming shut and echoing throughout the hallways. The 75 sixth-graders who belong to the new middle school do their learning in the spacious and modern interior of the lower-level Crystal Bridge Conservatory at Myriad Botanical Gardens with the sounds of nature abuzz.

John Rex Charter School and Myriad Botanical Gardens teamed up to allow for John Rex’s entire middle school to be housed at the garden permanently. School director Joe Pierce said the partnership developed naturally. Myriad Botanical Gardens has been a field trip favorite among the elementary school’s students for years. The collaboration was possible due to a $1.7 million grant from Inasmuch Foundation.

The middle school will include a seventh grade in 2019 and an eighth grade in 2020. For now, the school is welcoming its first sixth-grade class. The children are enjoying getting their hands dirty and exploring the gardens’ Alice in Wonderland-like terrain.

“We are the only botanical garden in the country that has an actual public school on its grounds,” said Myriad Botanical Gardens executive director Maureen Heffernan.

Aug. 8 marked the first day of school for John Rex’s sixth-grade class. The school’s elementary education began in 2014 and remains the only public charter school in downtown Oklahoma City. The school has grown in size and popularity since its inception. According to Pierce, there are currently over 500 children on the school’s waiting list.

Students who live in the school’s attendance boundaries have first priority while students who live within the Oklahoma City Public Schools district are the next to receive admission consideration. Based on classroom space, consideration is then given to children whose parents work within the school’s attendance boundaries, which fall between 13th Street to the north, Western Avenue to the west, Lottie Avenue to the east and the Oklahoma River to the south.

The school’s expansion into a middle school comes after years of planning by school board members and nudging by school parents.

“I was praying for this,” said Natasha Boyd, an Oklahoma City parent and nonprofit organization employee. 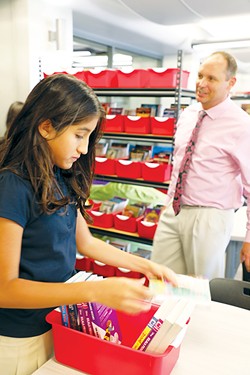 Boyd’s daughter, Jamya, is a sixth- grader at the school. Her mother said she has been at the school since it opened, when Jamya began second grade.

“We have always lived in Oklahoma City but chose to send Jamya to private school for her early education,” Boyd said.

Before the establishment of John Rex, when Jamya was just a toddler, her school closed unexpectedly and her parents chose to send her to their neighborhood’s public school.

“It was rough,” Boyd said. “Coming from private school, I think Jamya was ahead of her class. When she complained of being bored, her teachers gave her busy work. I could tell that the teachers at her school were overwhelmed, and I felt guilty asking them to pay more attention to her. I began to sense that her education was lagging.”

Boyd began searching for other educational opportunities for her daughter. She found John Rex and enrolled Jamya into the school’s first class as a second-grader.

At the event, they met with their children’s teachers and heard from Pierce and Oklahoma City mayor David Holt.

“There is a great demand to get into John Rex,” Holt said. “That demand has caused families to move here, and the migration has sparked another chapter in the renaissance of downtown Oklahoma City.”

Penrod, Boyd and Hernandez listened to the mayor’s remarks and proudly watched as their children took the microphone to recite the school’s creed.

The parents said the quality of the education their children receive is imperative.

“It means everything to me,” Penrod said.

Penrod is a molecular lab scientist at Oklahoma’s state department of health while Hernandez and her husband own a public relations business in Oklahoma City. The mothers echoed Boyd’s sentiments about John Rex.

“There is so much diversity here,” Penrod said. “There is diversity of socioeconomic status, race, culture and religion, and there is also diversity of experiences. The children’s learning experiences are very hands-on.”

Pierce said students take at least one field trip every two weeks and any Oklahoma City venue is up for grabs due to the school’s enrichment program and its collaborations with Oklahoma City businesses and nonprofit organizations. Students frequently visit Metropolitan Library System’s Ronald J. Norick Downtown Library, Oklahoma City Ballet, the Boathouse District and museums within walking distance.

The benefits students receive from the partnerships John Rex has made due to a fundraising need are more than just financial, Pierce said.

“There’s no doubt that our sponsors influence the educational opportunities our students are given and the way in which we teach. We see the benefits of having a hands-on approach to learning, of getting to know each student’s strengths and weaknesses,” Pierce, a former Edmond Public Schools administrator, said. “We value the quality of their thinking more than the quantity of their work.”

Hernandez said her daughter receives life lessons from her teachers but also from classmates who represent diversity to its fullest.

“She is friends with children who are very privileged and with children who live in a local homeless shelter,” Hernandez said. “There is a wide range of students with different socioeconomic status, cultures and races. That’s an education in and of itself.”

To make up for the lack of local funding, school administrators like Pierce seek sponsors and partnerships that parents claim make all the difference.

“It’s this model of partnership and community that amazes me, “Hernandez said. “The school administrators are resourceful in fundraising. Everybody is involved — the teachers, the businesses, the parents, the school board. And the result is a good education for our kids.”