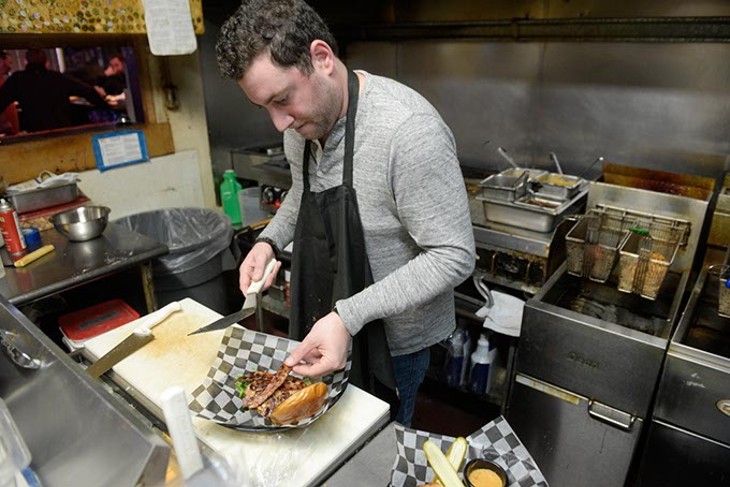 The elder Shadid started Ned’s Catering in 1984 after helping set up Big Ed’s Hamburgers franchises and owning one himself.

After Penn Square Bank failed in 1982 and oil prices plummeted, national burger chains dropped their prices, too, he said.

“McDonald’s dropped down to 89-cent hamburgers, and it hit all those medium companies, like Johnnies and Big Ed’s,” Shadid said.

So he went to a nearby signmaker and printed a banner to tell customers he catered.

Now, with 32 years of catering under his belt and five years working with his son, the pair returned to the restaurant business with Ned’s Kitchen at Cock O’ the Walk Bar & Grill, 3705 N. Western Ave.

Shadid Jr. said he still loves catering, but he has dreamed of running a restaurant for a while. His friend and Cock O’ the Walk owner Chris McGuire wanted to start serving food again. That’s when stars aligned.

“It seemed like the right thing to do,” Shadid Jr. said.

Running a restaurant is different than catering, Shadid Jr. said. Both require a lot of hard work, but a brick-and-mortar venue requires more organization and timing.

While Shadid Sr. considers the Big Ed’s Hamburgers franchise his entrance into the culinary world, his parents worked in the food service industry long before that.

“They had a lunch counter in Penn Square years ago. They had the lunch counter at AMC, which was one of the highest volume operations in the city,” he said. “They finished their career at Leroy’s Grill at 50th and Meridian, by Putnam City High School.”

When they sold the business in 1977, it went to Ned’s cousin, Edward “Big Ed” Thomas. The location became Big Ed’s second store and Shadid became the franchise sales director for the company, helping open 32 of them across three states.

Catering out of his own franchise, Shadid built relationships that helped grow his business to more than 100 employees and took him to work in every state but Alaska and Hawaii.

“With catering, you know the number you’re going to feed and the menu is set in stone; you know exactly the product you need and how many people will be there,” he said. “In the restaurant, you have to maintain the products on the menu and the level of service no matter how many people come in. Some days, you’re going to serve 90 percent burgers or salmon sandwiches, and you have to be ready for it.”

Shadid said his son is his right-hand man, but working out of Cock O’ the Walk is too good to pass up.

“Operating the kitchen there for them is a great test venue for future restaurant concepts,” he said. “We can test what they love and what they don’t love.”

So far, Shadid Jr. said, they love it.

“The comments and the compliments you hear from people are really great,” he said. “People bring in their friends and tell them, ‘I promise you, it’s really good.’”

“I don’t know any other bar serving a salmon salad or a mozzarella-stuffed fried risotto ball,” Shadid Jr. said. “There’s nothing going from the freezer to the fryer here. I think we’re making some of the best bar food in town.”

The venue also serves dry-rub chicken wings and a variety of grilled cheese sandwiches, including one made with braised beef, blue cheese and a demi glace, a rich, beef stock-based sauce.

Shadid Jr. said he hopes customers get used to the quality because he’s not going anywhere.

“There are other things on the horizon,” he said, “but we’re planning to stay here for a while.”