Comedian Brian Posehn brings his brand of self-deprecating humor to a pair of shows at The Paramount Room. 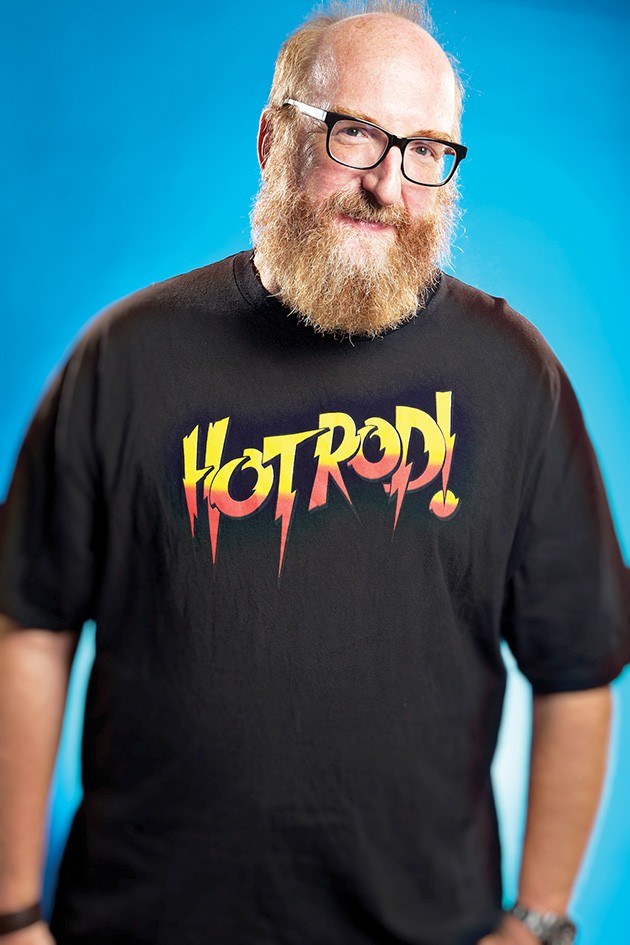 When comic, actor and sometimes heavy metal vocalist Brian Posehn describes himself, one word comes up frequently. His 2006 debut album is titled Live in: Nerd Rage; his 2018 memoir is titled Forever Nerdy: Living My Dorky Dreams and Staying Metal, and his Dungeons & Dragons podcast is titled Nerd Poker.

“I’m a mildly successful, not so widely known stand-up comic, writer and actor and full-blown nerd,” Posehn — known for playing recurring roles on Just Shoot Me, The Sarah Silverman Program and The Big Bang Theory — writes in Forever Nerdy. “And by full-blown nerd, I mean I’m obsessed with a bunch of cool stuff that dumb people think is uncool, like comics, Dungeons & Dragons, action and horror movies, and HEAVY FUCKING METAL.”

Posehn performs at 8 and 10:30 p.m. Friday at The Paramount Room, 701 W. Sheridan Ave. As a writer for Deadpool comics, an actor in Rob Zombie’s The Devil’s Rejects and a musical collaborator with Anthrax’s Scott Ian (more on that later), Posehn has had the chance to creatively explore many of his obsessions in a multi-hyphenate show business career, but in a phone interview with Oklahoma Gazette, he said writing Forever Nerdy gave him a chance to think about his personal life without worrying about getting laughs.

“In a book, there’s less concern of four jokes per minute or whatever,” Posehn said. “Not that I do that with my stand-up, but I mean, there does have to be constant punchlines. Even in setups, there’s got to be laugh lines just to keep people interested. That is less of a concern when you’re writing a book, that’s for sure. … It was more about telling a story because it matters in the formation of me. I included things that weren’t necessarily hilarious just because I feel like they have a lot to do with who I am now.”

“Most people have two parents that form them,” Posehn said. “I just had one. Well, obviously, my dad’s DNA had a lot to do with it, but other than that, being raised by one person, there’s really only one person to blame. So I did that, but I felt like there were a couple of times where I pulled back because I’m like, ‘My mom doesn’t need me piling on her.’ … I don’t really trash my mom onstage because I have before, and it doesn’t go well. People are like, ‘Hey, we like you, but why are you being mean to your mom?’”

Other stories he shares in the book are better comedy fodder.

“I pulled some stories that I’d never used before in stand-up while writing the book,” Posehn said. “I recalled these stories and went, ‘Oh, there’s something I could potentially use for comedy on stage.’ … It made me think about doing a one-man show, but then I then I decided against that for now. I’m back to just working on the regular act, but definitely, the book influenced a little bit of where the act is right now.”

For Posehn, a one-man show would be “more theatrical” with “less jokes.”

“You can still be funny in a one-man show, which is what was appealing to me about it, but it just didn’t feel like the time for it because I’m also writing jokes about things that are happening now, and then I wouldn’t have a place to do those,” Posehn said. “I’m not touring, but I’m kind of perpetually touring. Until I come up with a new stand-up special, I’m out on the road. I wouldn’t want to do a one-man show right now in a comedy club because people might be bored if they don’t know they’re getting that, if they come expecting a normal stand-up show and they get more of a one-man show. I don’t know. Maybe I’m thinking too much about it.”

At least one story from the book made it almost verbatim into his stand-up act.

"I'm back to just working on the regular act, but definitely, the book influenced a little bit of where the act is right now."
— Brian Posehn tweet this

“I got into a fight with a fellow nerd,” Posehn said. “His glasses fell at one point, and I stomped on his glasses. Then I found out that they were actually my glasses. … The ending is already built in, so that was an easy story to adapt to stand-up because, just me telling it straight without adding anything, it already has a funny moment — the reveal of me being wrong. I’m not afraid to self-deprecate, and that’s one that just really kind of did it for me.”

As a comic, Posehn is also unafraid to look for laughs in grim or depressing places.

“I don’t lean on the dark, but I’ve also never been afraid of it,” Posehn said. “I definitely say dark things. I just want it to be funny, too, not just dark and grim. It also has to appeal to a bunch of different comedic tastes.”

He might not be working on a one-man show anytime soon, but a musical project Posehn has spent several years on might be coming soon. In an interview with Loudwire in December of last year, Posehn described his upcoming Grandpa Metal as “pretty much Chinese Democracy of heavy metal comedy records,” but he said the album is almost ready to release.

“The complicated thing about my project is I wrote it with [Metalocalypse co-creator] Brendon Small and Scott Ian, and we’re all super busy with other things, so it took forever to get all the songs recorded. Even getting everybody together to take a band photo is a total undertaking. Once we’ve got the album cover done, we’ll have a release date.”

Much like the musical tracks “More Metal Than You” and “Metal by Numbers” on Posehn’s previous comedy albums, Grandpa Metal songs such as “Satan Is Kind of a Dick” poke fun at metal’s clichés.

“Heavy metal has always made Satan seem cool, when anybody who reads knows that he really isn’t,” Posehn said. “Every song has been fun in its own way, and it was just more work than I’ve ever spent on anything. … There’s a Viking song. There’s a Halloween song, like a Rob Zombie type thing. I did a metal cover of ‘Take on Me.’ … That one is just nuts, and it’s the way I always wanted it. I feel like any song is better metal.”