I think you can kind of tell if a rapper is a jock or if he’s a nerd. 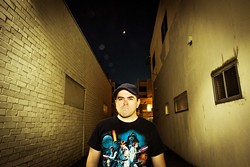 When MC Chris talks bling, he very likely could be referring to Green Lantern’s Power Ring or C-3PO’s gold plating.

Oklahoma Gazette: Where did you get the idea for this album, and how did it develop?

CW: I got married, had a kid and moved to [Los Angeles]. … I put myself in the right place. I had a child, I had a wife, I had a home, I had all these things that I wanted, but I was still having nightmares. I just felt like my subconscious was trying to tell me something. I went to a lot of therapy. I wrote a lot of songs; some stuff didn’t make it onto the album. It was an exploratory process to dive into what’s going on that I wasn’t thinking about.

OKG: How were you introduced to Nightmare on Elm Street? Was it as a kid?

CW: It think it was [A Nightmare on Elm Street 3: Dream Warriors] at my cousin’s house … in Lake Forest, Illinois. They’d make deep-dish, Chicago-style pizza. ... It was always like an event to watch a movie there. One night, we watched Freddy part three, and I don’t think I’d seen a Freddy movie before. It just blew my mind. And what a great movie to start with, because it pretty much is the best movie of the series, you know? It really had some good ideas. I hope they make some more movies and that they’re more like Dream Warriors. The people who are getting chased really control their fears and become really powerful.

OKG: Would you say the line that divides nerdcore and hip-hop has blurred in recent years?

CW: I think you can kind of tell if a rapper is a jock or if he’s a nerd. Most rappers are going to talk about their city’s sports team. Not a lot of rappers are going to have a song focused on Wolverine or something; they will make a reference. You’re seeing tons of ’90s animation references in hip-hop and some of the most popular things coming out this year are referencing things that were on Nicktoons and The Disney Afternoon and stuff like that. That’s not that nerdy, but it gives you a sense all that pop culture is fair game in hip-hop. Nerdcore is where it’s really concentrated. ... Every song is about a nerdy concept and every album is very conceptual and is usually about one particular thing. It’s something the more diehard nerds have attached themselves to and have stuck with for a really long time.

OKG: Your show is Oct. 5 at 89th Street Collective. What can people who haven’t been to an MC Chris show expect?

CW: Oklahoma shows are kind of funny because they always feel so familiar. I don’t mean like I recognize it from before like déjà vu. I mean it feels like family members are in the room. ... It almost feels like you’re doing theater in the round or you’re performing for a bunch of people at a family reunion or something.

with MC Lars and Mega Ran