Tulsa developer Elliot Nelson was one of the first restaurateurs to see the potential in Oklahoma City’s Midtown district. Nelson brought James E. McNellie’s Public House to the neighborhood in 2009, before it became trendy to do so.

Nelson’s McNellie’s restaurant group followed the success of its first Oklahoma City restaurant by bringing the German beer garden concept Fassler Hall, modeled after its Tulsa location, to Midtown in 2014.

Combined with Dust Bowl Lanes, a vintage bowling alley, the 30,000 square-foot building at 421 NW 10th St. is a hub for activity in the trendy neighborhood. Fassler Hall’s concept of house-made sausages, German pretzels and a beer list that is more than twice as long as its food menu has become so successful that the McNellie’s group will open a Little Rock location later this year.

Fassler Hall’s copious beer selection, music and trivia nights, complete with a patio that includes ping pong tables and cornhole boards, make it a prime target for the city’s young (and young at heart) professional scene.

However, it’s much more than a place to drink and be merry, especially after a September menu addition overseen by McNellie’s Group operations manager Brian Fontaine. 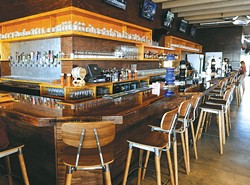 Fassler Hall made its name with a variety of German-inspired sausage ground on-site using Oklahoma City suppliers and stuffed into casings by staff. Manager JT Bennett said the most popular sausage is the classic bratwurst, which is boiled in Spaten Optimator beer and topped with house sauerkraut. It’s as good of a representation of German sausage as you’ll find in Oklahoma.

Bennett said Hunter, which is a combination of venison, buffalo and pork, is the second most popular sausage. The most recent sausage addition to the menu is the Italian, which combines thyme and rosemary with onions and peppers.

The menu additions also include new entrees that come with two sides. I was surprised at the selection. It’s pretty clear that it’s not normal bar food. A concept as successful as Fassler Hall could probably get by with complementing its large beer and alcohol menu with a no-frills selection of sausages and duck fries, especially when it’s warm outside and the patio is full.

What happens when it’s below freezing and the only thing that can warm your soul is a warm plate of comfort food? The new menu is here to help with honey-braised pork shank topped with crispy onions ($16).

Fassler Hall has served versions of pork and chicken schnitzel since its opening, but only on a sandwich. Schnitzel originated in Austria but is popular all over the world. Similar to Oklahoma’s ubiquitous chicken-fried steak, schnitzel is also pounded thin before being coated in flour and egg, but it differs as it gets a final coating of breadcrumbs.

Sitting down for lunch at Fassler Hall on a chilly afternoon, the German classic pork schnitzel ($14) topped with mushroom gravy called my name. I love a good white pepper gravy as much as the next guy, particularly Cheever’s Cafe’s jalapeño version on its chicken-fried steak, but the merlot-based cream gravy topping the pork schnitzel was even better. 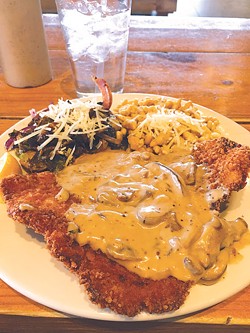 The gravy is finished with caramelized onions and fresh, thick-cut cremini mushrooms that made a perfect complement to the schnitzel and one of my side items, spaetzle. Conspicuously absent from Fassler Hall’s initial menu, the soft egg noodle is the dish, along with schnitzel, that I most associate with German cuisine.

Over the last few months, I’ve considered making my own spaetzle at home, but I’ve been deterred because it required a special “hopper,” a grate-like device that cuts the egg, flour and salt mixture into perfect little sections.

I’m happy to find it on Fassler’s new menu because it saves me from ordering the tool and adding to kitchen clutter. I found myself mixing the spaetzle with the gravy, a combination so good that it left me with the energy to solve Oklahoma’s ongoing budget crises.

My meal was finished with a side of Brussels sprouts, which I would term a salad because it’s served cold. The sprouts are flash-fried and mixed with red onion, garlic and balsamic vinegar before being cooled. The dish was tasty and the sprouts were cooked well, but I would prefer it served warm.

Food from Dust Bowl is also available at Fassler Hall and includes a variety of intriguing tater tots, including mac and cheese and Mexican versions, burgers and chili dogs.

“Our staff does a good job accommodating both menus,” Bennett said. “It can be a challenge for servers because Dust Bowl is far away from the kitchen, but we make sure everything comes out hot. Our staff does a really good job jumping back and forth between German and American food.”

If you’ve only thought of Fassler Hall as an after-work refuge or weekend warrior playground with its extensive German beer menu, I’d suggest stopping by for lunch. The new entrees provide a hearty and well-rounded meal, and you won’t have to deal with the loud and boisterous crowd the beer list brings with it. If you are there during peak service, the menu provides a high-quality meal in a beer hall setting

What works: The merlot-based cream gravy is luxurious.

What needs work: Brussels sprouts would be better served warm.