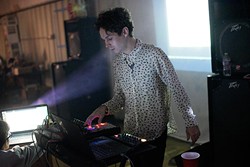 A former metal fabrication warehouse has new life. The warehouse is now Resonator, a 3,600-square-foot art gallery and printshop. It’s the brainchild of an ever-evolving group of artists, including gallery director Eric Piper, who moved to Norman in 2009.

“The goal of the space is to give passionate, creative intellectuals a platform to make a real, lasting impact on the world,” he said.

The recently opened gallery provides community workspaces, a woodworking shop and classes hosted by artists from around the globe. Resonator hosts Annavittoria Conner’s solo exhibition Not All Women Do 6 p.m. Dec.3-1 a.m. Dec. 4 at the venue, 1010 N. University St., in Norman. Admission is free.

While the Resonator is relatively new, the concept behind it isn’t. Piper began working with Andy Beard, the organizer behind Downtown Sound, a collectively run band rehearsal spot. Downtown Sound would bring in artists, record albums, host community discussions and let members organize events there.

“When Andy left for grad school in Turkey, he told me that I should take over,” Piper said.

Its name changed to Dope Chapel, but the collective-run space remained much the same. Over the next two years, hundreds of touring artists and musicians showcased there, funded primarily through donations and grants. Some artists, including one who live-streamed his walk from Los Angeles to Norman, became artists-in-residence.

“Last year, we became more vocal about wanting to start a printshop in the space,” Piper said. “If you have a painting, then you only have the piece of art, but if you have prints, you can make enough to share and trade with friends and other artists.”

In 2015, Dope Chapel closed while members sought a space large enough to house a printshop. They landed in the metal fabrication shop and Resonator was born.

“Because we were beginning a new project and new work relations with many members, we decided to make a new name that was fresh from expectations,” Piper said. “We all had ideas for projects and past dreams that would bring too much baggage to the new collective space. Plus, a resonator is a chamber where all the voices are gathered and reflected off each other to become one larger voice, so it has a nice poetry.”

Resonator seeks to grow its collective by networking with artists across the globe.

It also aspires to bring more hands-on possibilities to the Norman gallery with its community workspaces, which can be rented daily, weekly or monthly, Piper said.

“I think the idea of the artist working alone in the tower is dead,” he said. “We can achieve so much more working together as a group than we can as individuals.”

Not All Women Do by Annavittoria Conner