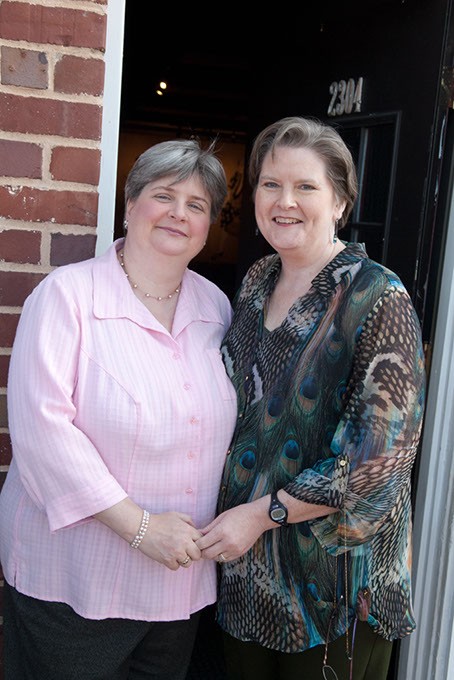 For a long time, Sharon and Mary Bishop-Baldwin waited for someone to step up.

In October 2014, two of the lead plaintiffs in a long-battled lawsuit that eventually brought marriage equality to Oklahoma were at last able to say their “I do’s.”

Over a decade earlier, though, the couple hoped someone else — a leader or hero of some kind — would take on the fight that would make marriage a reality for the state’s same-sex couples.

It soon became clear, however, that if they wanted to see marriage equality sooner rather than later, they would need to do more than hope.

“The more we talked about it, the more we realized we needed to do it,” Sharon said.

Sharon wrote and self-published Becoming Brave: Winning Marriage Equality in Oklahoma and Finding Our Voice with her spouse Mary.

The book, published in January, is a firsthand account of the couple’s experiences as they navigated the momentous, yearslong legal battle.

During the legal process, the couple was often complimented on their bravery. Sharon said at first, she didn’t understand the praise — all they did was file a lawsuit.

“Looking back, I see that they were right, to some degree,” she said. “The changes we made to our lives for that lawsuit — somewhere in the book, I liken it to being parents of a new baby. Suddenly, you have this other thing that you’re living for.”

They never imagined they would be seen as role models or champions for a marginalized community.

Their story is a reminder that pioneers and history makers are not just the figures read about in textbooks.

Anyone can make history, and heroes walk among us.

“I think Becoming Brave is really about finding out that we were the advocates that we are,” Sharon said.

Sharon and Mary met while working as editors at Tulsa World in 1995. By 1997, they’d moved in together.

As was the case for many other same-sex couples in Oklahoma and across the country, marriage was not yet a possibility.

Nearly a decade later, after convincing themselves they needed to take their battle for marriage equality to the courts, the couple approached their bosses at the newspaper with their plan. Common ethics practices prevent journalists from becoming part of a news story.

They also knew that their employers might not want to be associated with a high-profile, controversial case like this. Sharon said they both believed they could be fired for their decision, but they did not let that deter them from pressing forward.

Tulsa World didn’t make Sharon or Mary give up their jobs.

The couple’s involvement in the case did present several coverage challenges to the newspaper, but Sharon said management recognized they were acting as individuals in the case.

Ethically, a stipulation of their involvement was that Tulsa World wouldn’t touch any news involving the case as it progressed through the legal process.

Sharon said the stipulation seemed to evolve to restrict coverage of many stories related to same-sex marriage.

Still, Sharon said she was fine with a lack of coverage if it meant they could pursue the potentially groundbreaking case.

She said the paper was supportive of the couple and even those who might have disagreed with them always acted professionally.

Sharon and Mary were mostly just happy they were able to keep their jobs while all of it was going on.

“That was a real gift,” Sharon said.

The couple first thought of writing a book about their experiences around the time Tulsa federal judge Terence Kern ruled in their favor in January 2014. They eventually left their Tulsa World jobs to split their time between writing the book and working at the nonprofit Oklahomans for Equality center in Tulsa.

Sharon underestimated the amount of work required to write the book.

“I thought going into this, ‘Oh, this will be much easier than writing a traditional book because I lived all these things and it won’t take much research,’” she said. “Well, that was totally wrong.”

A lengthy index resides on their project’s final pages, and reading through the text, it becomes obvious how well-sourced and researched the book is. Sharon wrote most of it with input and editing from Mary, who also wrote her own chapter.

Sharon said writing Becoming Brave was like exercising all the editing skills she learned during her tenure at the World, along with the added learning curve of writing a book for the first time.

They hosted five book signings and plan to hold more.

They love hearing from people in the community. Sharon said during a recent signing at Full Circle Bookstore in Oklahoma City, they met a couple that has been married for two years but together for 48.

“I look at people who are 30, and I think, ‘This would have happened in your lifetime eventually, whether Mary and I did this or not,’” Sharon said. “Marriage equality was going to happen; it was just a matter of when. But then I look at something like this woman and I think how close it was.”

Sharon and Mary are often met with reminders that examples of inequality and hatred still exist after their court ruling.

Sharon said her advocacy work with Mary will continue for as long as they see a need.

“We never said marriage was the last mountain to climb,” she said. “In fact, we emphatically said the opposite.”

The book is available at Full Circle Bookstore, 1900 Northwest Expressway.

Signed and personalized copies can be ordered at facebook.com/becomingbraveoklahoma.