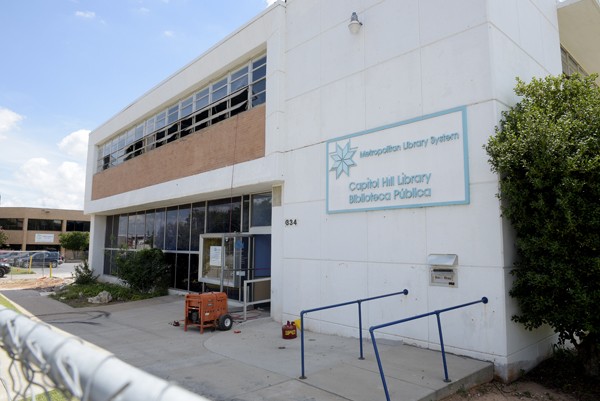 Like many of the buildings in the Historic Capitol Hill district just south of the Oklahoma River, the Capitol Hill Library, part of Oklahoma City’s Metropolitan Library System, has its fair share of history.

The three-level structure opened in 1951, and a $4.3 million update to the structure began this summer.

Library manager Jana Hausburg said it was important to stay true to the original site of the branch at 334 SW 26th St., and the functionality of the library’s space is her main concern.

“The space was extremely challenged,” she explained. “In the ’50s, they didn’t plan for computers. Why would they?”

As construction continues at the new site, 327 SW 27th St., the contents of the branch have been temporarily relocated nearby inside Templo de Alabanza’s gymnasium, 330 SW 24th St. Hausburg said the library has operated out of the 12,000-square-foot space since late last year for good reason. The deep history of the building (It served as a fallout shelter during the Cold War.) also brought with it a myriad of challenges. When the carpet was pulled up, asbestos had to be addressed on the 1950s tile, Hausburg said.

“Heating and air would break all the time, and our maintenance crew would have to rebuild the parts in our shop because they don’t sell them anymore,” she added.

“We had the money in the bank for a long time, but because we’re a part of Oklahoma City, there were other things that were a priority first,” Hausburg said.

When she became library manager in 2011, she connected with Calle Dos Cinco at Historic Capitol Hill director Donna Cervantes. Through talking about needed work on the library, the two were able to keep the building on the minds of city officials, Hausburg said. She said Ward 4 Oklahoma City Council member Pete White was interested and helped the project gather steam.

Ease of function is the primary hope for the new library, expected to be completed in summer 2018.

The former building was being used at its maximum capacity, and its design made it challenging to serve different customer needs, Hausburg said. She said the library struggled to balance the needs of adults, who wanted quiet, and children, who gathered in groups after school.

“After school was out, we would have kids pretty much seated everywhere,” she said.

The future library, designed by architects at MSR Design and Guernsey, will offer almost double the space, including a dedicated children’s space, a large meeting room that can be divided into an area for teens/tweens and four study rooms. Hausburg said the library recently incorporated a concurrent storytime and playtime for families with babies and children. The large meeting room will fill multiple roles.

“People are always asking for a meeting space,” she said.

The room is also large enough to act as a community space for school-aged children. Hausburg said Capitol Hill Library launched study and reading groups for them and the divided room will provide the space. Plus, it will keep noise levels down for patrons who might want to search online for jobs or just surf the internet in quiet. The soundproof study rooms will also help with this issue.

The library plans to partner with the Oklahoma City Community College satellite campus, which is being built nearby. She said the combined resources will create a strong community anchor.